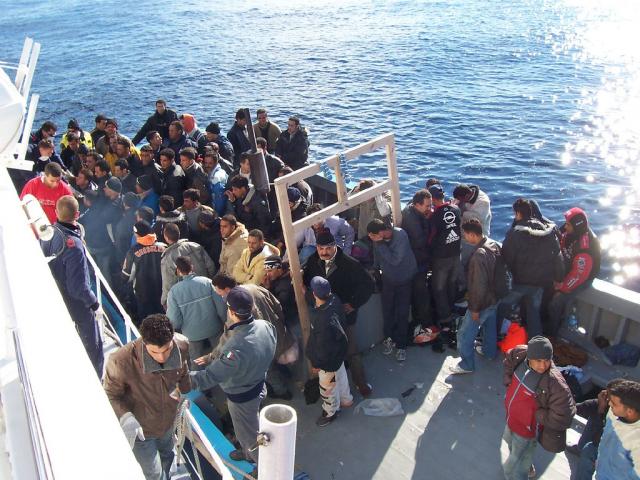 What do the political parties say about the Mediterranean migrant deaths?

David Cameron: “This has been a dark day for Europe; it really is horrific the scenes that we've all witnessed on our television screens, the loss of life.

"We've got to deal with the instability in the countries concerned; we've got to go after the human traffickers and the criminals that are running this trade.

"We've got to make sure yes, there is an element of search and rescue but that can only be one part of this and we should use all the resources we have, including our aid budget which can play a role in trying to stabilise countries and trying to stop people from travelling."

On 15 October 2014 Baroness Anelay of St Johns said: “We do not support planned search and rescue operations in the Mediterranean. We believe that they create an unintended ‘pull factor’, encouraging more migrants to attempt the dangerous sea crossing and thereby leading to more tragic and unnecessary deaths. The Government believes the most effective way to prevent refugees and migrants attempting this dangerous crossing is to focus our attention on countries of origin and transit, as well as taking steps to fight the people smugglers who wilfully put lives at risk by packing migrants into unseaworthy boats.”

A Conservative Spokesperson said: "We believe that the only sustainable means of addressing this issue is to take action to dissuade migrants from making these perilous and illegal journeys in the first place, enhance protection in refugees' regions of origin, and combat the criminal gangs who place migrants' lives at risk. This is why we support the EU's focus on action 'upstream' in countries of origin and transit. The government is working with other EU states to prevent the deaths of people crossing the Mediterranean through joint efforts under the EU's Task Force Mediterranean, established following the Lampedusa tragedy in October 2013."

“The Government is working with EU partners to prevent the deaths of people crossing the Mediterranean through joint efforts under the EU’s Task Force Mediterranean, established following the Lampedusa tragedy in October 2013. While the UK is providing support for the new Frontex (EU External Border Agency) Operation ‘Triton’, an enhanced maritime border management operation that intercepts migrants in theMediterranean, we believe that the only sustainable means of addressing this issue is to take action to dissuade migrants from making these perilous and illegal journeys in the first place, enhance protection in refugees’ region of origin, and combat the criminal facilitators who place migrants’ lives at risk. This is why we support the EU’s focus on action ‘upstream’ in third countries of origin and transit.”

“We are supporting EU proposals for enhanced refugee protection in North and East Africa, building on our current support for those seeking”

“Mare Nostrum is an Italian search and rescue operation in the Mediterranean. The UK has had no involvement in, and made no contributions to, the operation.

We continue to work with Italy and other EU Member States to address migratory pressures in theMediterranean, for the sake of law abiding citizens and in the best interests of those tempted to make this dangerous journey. This includes providing support to Frontex, the EU external borders agency, and finding ways to address the causes of illegal migration and organised crime in countries of origin and transit.”

“The people who are responsible for the deaths of those at sea are the organised traffickers who seek to exploit the vulnerable by putting them in increasing numbers on boats that are entirely unseaworthy. Our judgment is that extending the emergency measures has encouraged that and put more lives at risk

“Our judgment is that extending the search and rescue approach that has been taken close to the Libyan coast will mean more people putting out to sea in less seaworthy boats in greater numbers. That is making the situation worse.”

Philip Hammond (Secretary of State for Foreign and Commonwealth Affairs)

“These migrants are not Libyan; they are using Libya as a transit route. We need to use our aid budget to support the countries where migrants are coming from. It would be far worse if we were not poring aid to these countries. We also have to take action against the criminals groups (of people traffickers), of whom many are linked to terrorist organisations.”

“Of course we have got to support search and rescue operations in the Mediterranean. Nobody wants to see people drowning."

Natalie Bennett said: “Britain should immediately pledge funding to help with the search and rescue operation in the Mediterranean. We cannot simply stand by while hundreds of people drown in our continent's seas. The charities saving people's lives in the Mediterranean must be properly resourced, and Britain must help with this.

"In the longer term we must push the EU into rebuilding an effective scheme to rescue migrants in the Mediterranean – we shouldn't have to rely on the heroic work of charities to undertake this basic humanitarian task.

"It's easy to forget that, behind all of the hard talk on migrants, are people who are desperately fleeing wars, hunger and disease. The next UK Government must accept more refugees from war-torn regions and invest in international policies that build peace and stability across the globe.

Caroline Lucas, in a letter to immigration minister James Brokenshire, said: “The end of Mare Nostrum has failed to deter migrants and has also left far fewer safeguards in place to rescue those that need help. I would, therefore, urge you once again to take action to prevent any further needless loss of life by ensuring that the EU immediately backs the restoration of a properly funded search and rescue operation that is up to the task at hand.”

"With 8 000 desperate people being picked up in the Mediterranean in under a week, it is clear that we have a humanitarian problem. People will always try and escape miserable conditions, political and civil unrest, environmental disaster, and persecution. For them to drown trying to reach European shores and safety only indicates their desperation. This is why we need greater search and rescue at sea to be able to prevent catastrophe. Riskier and ever more treacherous sea routes are attempted because land borders are increasingly restrictive. If safe access routes existed, we would have one way of avoiding this."

Ed Miliband said search and rescue operations in the Mediterranean should be restarted.

"Europe has got to learn the lessons because we can't have people drowning in European waters in this way, the world standing back aghast and Europe standing back"

He tweeted “It's a scandal that children are dying because the EU stopped search & rescue in the Med. As PM I would push the EU to #RestartTheRescue”

“The people traffickers are to blame for the migrant deaths.”

Yvette Cooper said the tragedy "shows how immoral and wrong it is for the government to argue that 'search and rescue' operations in the Mediterranean should be stopped in order to deter people from travelling".

"More and more dangerous, overcrowded boats are coming across. Leaving some people to drown in order to deter others is a shocking and inhumane approach, not worthy of Britain's long history of helping those whose lives are at risk."

“There is an urgent requirement to meet our moral obligations and restore the search and rescue capabilities that have been withdrawn in the Mediterranean.”

“It is morally indefensible to say people should drown in the Mediterranean to somehow stop other people coming.”

“The responsible course is to both support and encourage the work of the UN envoy in Libya – at same time working effectively across the Middle East and North Africa to try and support people in the region. But we should not withdraw, as this UK government apparently supported, the withdrawal of a search and rescue capability.”

"I think the humanitarian reasons why not just ourselves, but other countries, decided to intervene from the air in Libya is well-known.

"Gaddafi could not have been more explicit - he said that he was going to kill every innocent man, woman and child in Benghazi.

"To suggest that intervention is the sole reason for the very profound economic and social dislocation and poverty in the whole of North Africa is both simplistic and taking election-time political point-scoring to a new low."

He tweeted “This reminds us of the importance of the UK aid budget to ending poverty so people do not have to take such risks in the future.”

A Liberal Democrats spokeswoman said:the party supports "European co-operation”, and would "push for more effective EU measures to prevent the tragic loss of life for many crossing the Mediterranean."

"The fanaticism of [former French president] Sarkozy and Cameron to bomb Libya - and what they've done is to completely destabilise Libya, to turn it into a country with much savagery, to turn it into a place where for Christians the situation is virtually impossible," he told the BBC on Sunday.

"We ought to be honest and admit we have directly caused this problem.”

“When Isis say they want to flood our continent with half a million Islamic extremists, they mean it. There is nothing in this document that will stop those people from coming. Indeed I fear we face a direct threat to our civilisation if we allow large numbers of people from that war-torn region into Europe.”

“The clear demand for the rapid implementation of a common EU migration and asylum policy, to be confirmed in a vote in the European parliament, would be wholly unacceptable to a United Kingdom that already has levels of immigration that are too high, and as Isis have previously threatened, could lead to half a million Islamic extremists coming to our countries and posing a direct threat to our civilisation.”

He says actions by Operation Triton, Europe's are intended "to prevent criticism of inaction in EU capitals", but the operation actually "incentivises the people smuggling mafias to be bolder".

On 28 October an Early day motion entitled ‘Deaths of migrants in the Mediterranean’ was put down. The EDM, which was signed by 46 MP’s, stated:

“That this House is appalled at the loss of 2,500 migrants in the Mediterranean since January 2014; commends all those who have tried to rescue these desperate people, many of whom are victims of war, environmental disaster and civil unrest; is shocked that from 1 November 2014 the Italian sea rescue operation Mare Nostrum will cease and only be replaced by border patrols within 30 miles of the coast; and accordingly calls on the Government to support a proper humanitarian protection operation to help save the lives of these desperate victims of human-created disasters.”