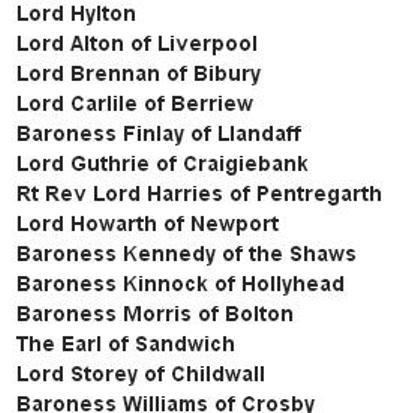 14 senior members of the House of Lords have writen a letter to the Telegraph about the need to address the terrible crisis in the Mediterranean, They argue that the response announced following the meeting on 23 April of EU leaders "represents the beginning of a response, but is not enough." The text of the letter can be found below.

"SIR – Europe and America cannot stand by while refugees drown in the Mediterranean (Letters, April 24). Some 3,000 died last year. Almost 2,000 have died so far this year. Thursday’s meeting of European ministers represents the beginning of a response, but is not enough.

Faced with the plight of the Vietnamese boat people, the international community rightly recognised that it had a moral and legal duty to act. For the past few months, we have been urging an international response to the Mediterranean disaster.

Malta, Italy, Sweden and the UN Refugee Agency have called for more effective search and rescue. Médecins Sans Frontières has committed itself to this. But the costs must be fully and widely shared.

Creation of an internationally policed safe-haven in North Africa, where asylum applications could be assessed and repatriation organised where appropriate, should also be considered urgently.

The exodus of desperate men, women and children has been driven by wars in Syria and Libya, by the conflict of Israel and Palestine, and the destitution and violence engulfing countries such as Sudan and Nigeria. Civilised nations have a duty to help and we should be mindful of the Pottery Barn rule – accepting responsibility to put right what you helped to break.

Long-term steps should be taken to make peace and prosperity in the Middle East and central and eastern Africa. Interviewing migrants in North Africa could reduce dangerous sailings. None of this, however, reduces the need for immediate lifesaving."