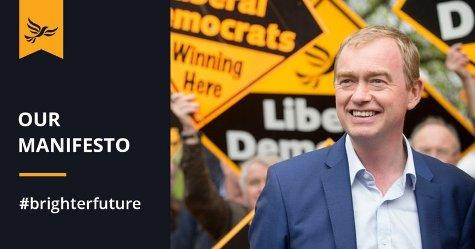 On 17 May 2017, the Liberal Democrats launched their manifesto for the 2017 General Election. You can read it in full here.

Liberal Democrats are internationalists – working with our European and global partners to champion human rights, help the poorest and protect our country and our allies. We will fight isolationist policies to maintain the UK’s proud record of international leadership.

Our Plan for International Affairs

Working for peace and security across the world

This is a challenging time for peace and security across the world. Terrorist organisations prosper, the conflict in Syria continues to present a significant problem to the region and the world, and rising tensions between Russia and the USA threaten a longstanding balance of power.

The UK has a proud record of playing a leading role in the European Union and in international institutions like the UN, NATO and the Commonwealth and should continue to do so, promoting wherever possible the liberal values of freedom and opportunity for all. We will:

Liberal Democrats believe that despite efforts to prevent violent conflict, sometimes military intervention is necessary. The UK should only militarily intervene when there is a clear legal and/or humanitarian case, endorsed by a vote in Parliament, working through international institutions whenever possible. We will encourage dialogue and mediation to reduce conflict between and within countries, working through the UN and other agencies.

In response to current major conflicts worldwide, we will:

Liberal Democrats have always been – and remain – strongly committed to ensuring justice and equity for poor people around the world. We believe that the UK must continue to play a leading role in ending poverty and promoting environmentally sustainable development, through implementing the UN Sustainable Development Goals. We will:

Standing up for Liberal values

Liberal Democrats believe that British foreign policy and international aid should seek to promote the liberal values of human rights and democracy throughout the world. We will:

Liberal Democrats are internationalists – working with our European and global partners to champion human rights, help the poorest and protect our country and our allies. We will fight isolationist policies to maintain the UK’s proud record of international leadership.

Our plan for rights

Whether by righting past wrongs, protecting citizens, or increasing freedom, the Liberal Democrats believe that legislation defending rights and liberties protects individuals and drives opportunity for many under-represented groups.

Liberal Democrats oppose all discrimination and believe that government should take an active role both in punishing discrimination and in ensuring it does not happen in the first place. Our society is only strong once it includes everybody – regardless of their background.

To extend diversity in public life and business, we will:

To safeguard rights and promote equalities, we will:

Liberal Democrats believe that we should all be free from an overreaching state and that the individual freedoms guaranteed by the European Convention on Human Rights and the Human Rights Act are central to a free and democratic society.

For that reason, the Liberal Democrats will:

As recent events across Europe – and at the heart of our own democracy, have shown, terrorism and violent extremism threaten us all. As liberals, we must have an effective security policy which is also accountable, community- and evidence-based, and does not unduly restrict personal liberty.

That’s why the Liberal Democrats will:

Immigration and asylum are under attack. Immigration is essential to our economy and a benefit to our society. We depend on immigration to ensure we have the people we need contributing to the UK’s economy and society, including doctors, agricultural workers, entrepreneurs, and scientists and so many others. Immigration broadens our horizons and encourages us to be more open, more tolerant.

Refugees are human beings fleeing from war zones and persecution and we have a legal and moral obligation to offer them sanctuary. The Liberal Democrats are proud of the UK’s historic commitments to assisting those seeking refuge from war, persecution and degradation, and believe that we should continue to uphold our responsibilities.

The immigration and asylum systems have suffered from inefficiency and severe backlogs and delays over many years, harming their credibility and ability to operate effectively. We recognise that large-scale immigration has placed strains on some local communities and services. Major improvements are urgently needed.

For that reason, when it comes to immigration the Liberal Democrats will:

And for asylum, the Liberal Democrats will: