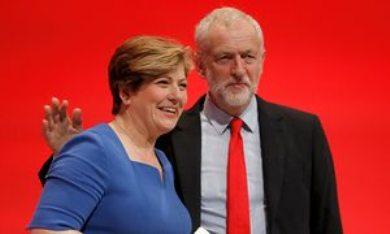 A draft of the Labour Manifesto was leaked on 11 May 2017. Relevant sections and the text in full can be read here.

Labour leader Jeremy Corbyn resumed campaigning in the General Election after a hiatus following the Manchester attack with a speech in which he said that an "informed understanding of the causes of terrorism", including Britain's role in supporting or engaging in conflicts abroad, must form a part of an "effective response that will protect the security of our people".

Corbyn said that a "sub-culture of often suicidial violence has developed amongst a minority of, mainly young, men falsely drawing authority from Islamic beliefs and often nurtured in a prison system in urgent need of resources and reform", and that the causes of attacks like that seen in Manchester could not be reduced to foreign policy alone. Despite this, he said, we should "be brave enough to admit that the war on terror is simply not working" and instead support the armed forces, Foreign Office and International Development professionals to "[engage] with the world in a way that reduces conflict and builds peace and security". He said that under a Labour government, the armed forces would only be deployed abroad "when there is a plan and you have the resources to do your job to secure an outcome that delivers lasting peace".

Read the full text of the speech here.

In a speech at Chatham House on 12 May, Labour leader Jeremy Corbyn criticised Conservative governments for following a “bomb first, talk later” approach to security and said that “human rights and social justice should drive our foreign policy”. Corbyn committed Labour to a “triple commitment” on defence, development and diplomacy, and a focus on “cooperation, peaceful settlements and social justice”. He said that “Western interventions in Afghanistan, Somalia and Yemen” had “failed in their own terms, and made the world a more dangerous place.” He also criticised former Prime Minister David Cameron’s “Libyan war” and said than a report published by the Foreign Affairs Select Committee had found that the intervention “led to political and economic collapse, humanitarian and migrant crises and fuelled the rise of Isis”.

Corbyn said that a Labour government would “want a strong and friendly relationship with the United States” but warned against “pandering to an erratic Trump administration” and “outsourcing our country’s security and prosperity to the whims of the Trump White House”. He said Labour would “conduct a robust and independent foreign policy” and “work for peace and security” with all permanent UN security council members. He pledged to “stand up for the people of Syria” and “press for war crimes to be properly investigated”, and said that any future military defeat of Daesh in Syria and Iraq would have to b followed by “a negotiated  settlement involving all the main parties, including the regional and international powers.” British arms exports should be “consistent with our legal and moral obligations”, he said, arguing that weapons sales to Saudi Arabia “must be halted immediately”.

The Labour Party has suggested that it was looking at new measures to prevent British-built weapons and military technology being sold to repressive regimes. In an interview with the Independent, Barry Gardiner, the shadow International Trade Secretary, hinted at the new arms measures. Asked whether action on arms sales to repressive regimes would be tackled in Labour’s manifesto, Mr Gardiner said he could not discuss details ahead of its official publication, but said:

“Our party has always pledged to embed human rights and social justice into our trade policy. Every Labour government would wish to uphold the strongest licensing criteria to ensure that any UK exports could not be used for repression or human rights abuse.”

In response to reports that Theresa May could try to push a motion through the House of Commons on joining military action against Bashar al-Assad if she wins the election, Shadow Foreign Secretary Emily Thornberry has said such a move would “risk open conflict between our armed forces and those of Russia and Iran." She warned May against allowing the UK to “follow Donald Trump’s lead with blind loyalty, no matter where it takes us, and no matter what our other allies think”. She said that a vote for the Conservative Party would be a “vote to repeat the mistakes of Iraq from a prime minister who just last weekend refused to accept that she got Iraq wrong”.

“Instead of this headlong rush to war, the British government should be working flat out through the United Nations to support the current talks on de-escalation of the conflict, with a view to creating a permanent ceasefire, a political solution and a lasting peace. That is what the Syrian people need, not Theresa May’s secret plans to escalate the war.

“These reports also reveal that – even on matters of peace and war – Tory MPs cannot be trusted to think independently and do what is best for the country. This increasingly authoritarian prime minister just sees them as voting fodder and, if they are prepared to back her rush to war, they will also surely vote for a chaotic Brexit and the dismantling of our NHS. The only way to stop them is to vote Labour.”

Jeremy Cobryn told an audience at Chatham House that Labour would 'stand up for the people of Syria'. They will press for war crimes toi be investigated and strive to make the Geneva peace talks work. With regards to ISIS, even after they have been militarily defeated, Corbyn has stressed that there will be a need for a negotiated political settlement.

Drone strikes against IS

Speaking to Andrew Marr on BBC 1 Jeremy Corbyn said that he supported NATO and wanted to establish a better relationship with Russia. In response to a question on whether Mr Corbyn would sanction a drone strike to kill the so called leader of IS, Abu Bakr al-Baghdadi, he told Marr that Baghdadi ‘not being around would be helpful’. However Corbyn added that he would want to see intelligence before sanctioning such a strike and how such action would help to end the conflict in Syria which continues to result in the death of innocent civilians.

Labour’s leadership has agreed a truce on their immigration policy. The party has accepted that free movement of people will have to end with Brexit. Despite this the details of Labour’s immigration policy are yet to be ironed out for the manifesto. Some favour a points based system that currently applies to people trying to enter the UK from outside of the EU. Shadow Brexit secretary Keir Stammer said that ‘we must have immigration that works for our communities and for our economy...and that means there has to be movement of people to come and work in this country. How that’s managed will have to be resolved but the last thing we want is for our businesses to go bankrupt’.

In his speech to Chatham House, Jeremy Corbyn derided foreign intervention and regime change as making the world a more unstable place than it was at the height of the Cold War. He stated that interventions such as in Libya had decreased security at home and declared a need for fresh thinking when it comes to security policy.

Labour will maintain strong and friendly relations with the US. However Jeremy Corbyn has warned against pandering to the Trump administration. He criticised the alarmist tone of Theresa May's speech at the Republican conference in January where May spoke of the rise of India and China, and the danger of the West being eclipsed.

Jeremy Corbyn has suggested the question of whether he would use nuclear weapons is extraordinairy, asking 'would you order the indiscriminate killing of millions of people'? He said if circumstances were to arise where a nuclear strike were a real option it would have been a 'cataclysmic failure'. Corbyn added that the security and safety of the people of Britain are his priority and he would achieve this by working with other countries to 'solve problems, defuse tensions and build collective security'. However Corbyn says that he is not a pacifist and military action, sanctioned by international law and as a genuine last resort could sometimes be necessary.