Humanitarian Factsheet: From "Cast Lead" to "Pillar of Defence" 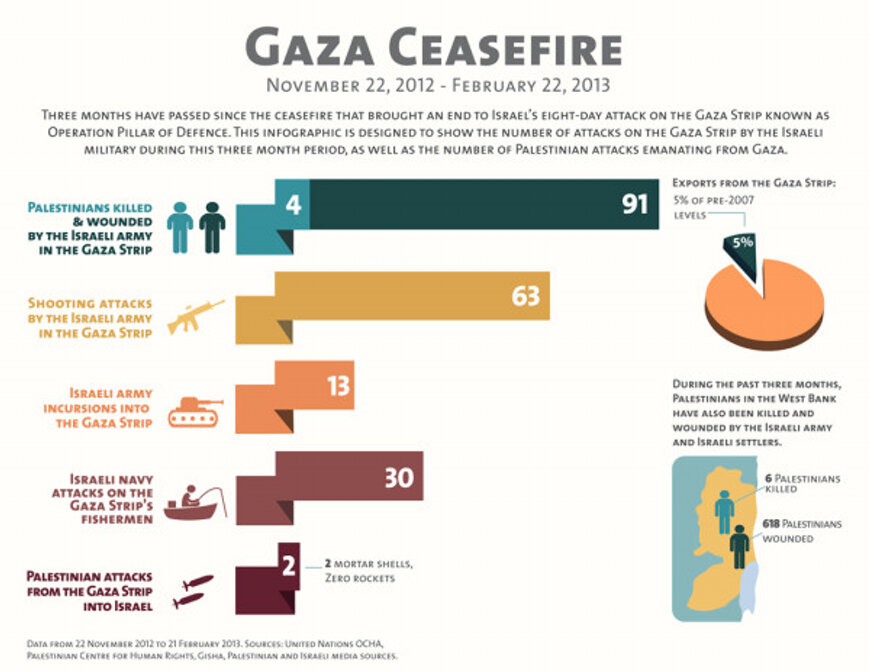 On 27 December 2008 Israel launched a wide-scale military offensive against the infrastructure and population of the Gaza Strip. Operation Cast Lead lasted for 22 days and represented the most devastating military assault against Gaza in nearly 42 years of occupation.

After unrelenting aerial attacks coupled with an intensive ground invasion that began on 3 January, the final death toll was 1,387 Palestinians, 773 of them civilians, including 320 children. Over 5,000 more were wounded during the offensive and much of the civilian infrastructure of the territory was obliterated, with hospitals, schools, mosques, civilian homes and even a United Nations’ compound severely damaged or destroyed. Thirteen Israelis were killed in the conflict, three of them civilians and four of them in friendly fire.

An investigation by the UN concluded that Israel had used both “disproportionate force" and "collective punishment" against the population of Gaza, and stated that during Operation Cast Lead it had committed “actions amounting to war crimes and possibly crimes against humanity." The report also concluded that the firing of rockets against Israeli towns by Palestinian militant groups constituted a war crime.

For more on Operation Cast Lead and its aftermath, please see Caabu’s 2010 report One year on from war: a report on the humanitarian and political situation in Gaza.

An August 2012 UNRWA report found that Gaza will be unliveable by 2020. The report concludes, "There will be virtually no reliable access to sources of safe drinking water, standards of healthcare and education will have continued to decline, and the vision of affordable and reliable electricity for all will have become a distant memory for most. The already high number of poor, marginalized and food-insecure people depending on assistance will not have changed, and in all likelihood will have increased."

It is a regular claim by Israel that it ended the occupation of Gaza when it disengaged in 2005, with the withdrawal of 8,000 settlers. However, Israel has remained as firmly in control of Gaza’s sovereignty as at any point since 1967, controlling its borders, air space and coastal waters, whilst retaining for itself the right to enter. Land restrictions imposed since late 2008 still remain, preventing Palestinians from accessing land located 500m to 1.5km from the Green Line. This restricted area on land is estimated at 15% of the total land mass of the Gaza Strip and 35% of its agricultural land: a sore restriction on the densely populated territory. Fishermen are prohibited from accessing around 85% of the maritime areas they are entitled to according to the Oslo Accords. These access restrictions are regularly enforced by Israeli military force over land and at sea when controlled areas are entered.

June 2012 marked the fifth anniversary of the start of the blockade. In October, 5,332 lorries entered Gaza (the pre-blockade average was 10,400) and 11 lorries of exports left.

The blockade has led to an economic implosion in Gaza. Unemployment is 28.4% among adults and 43.5% among young people.

An August 2012 report by UNRWA found that Gaza will be unliveable by 2020. Already the blockade means that 44% of Palestinians in Gaza are food insecure and 80% are aid recipients. Around 71,000 new homes are needed to cover the current housing crisis, yet many construction materials are banned because they are 'dual use' – i.e. could be used to make weapons. In this desperate situation, a flourishing tunnel economy has emerged, through which Hamas is able to bring in almost anything it likes. The tunnels provide Hamas with 100% of its weapons and 10 to 15% of its income.

The blockade has greatly restricted Gaza’s ability to recover from Operation Cast Lead.

Health of the population

As outlined in the devastating conclusion to the August 2012 UNRWA report, Gaza’s population faces an assault on their health and well-being from all sides: the water they drink is not safe, they cannot afford nutritious food, their hospitals are not equipped to treat them, hygiene is poor because of overcrowding and there is the ever-present threat of more conflict.

Currently only 10% of water from the Gaza aquifer is safe to drink. UNRWA estimates that the aquifer may become unusable as soon as 2016, with irreversible damage caused by 2020. 90 million litres of untreated or partially untreated sewage are poured into Gaza’s sea every day, contaminating fish and creating a public health hazard.

44% of Gazans are food insecure and almost twice that rely on aid agencies for at least some of their food. As a result tens of thousands of children have iron and vitamin deficiencies. According to Save the Children "the consequences of this include stunted growth of bones and teeth, difficulty fighting infections, fatigue and reduced capacity to learn." 58.6% of schoolchildren and 68.1% of children aged 9-12 months have anaemia, and 10% of children under five suffer stunting as a result of chronic malnutrition.

The Director of Public Medical Supplies in Gaza warned in July 2011 of an impending “humanitarian catastrophe” in hospitals due to a shortage of fuel and medical supplies. The lack of electricity has led to the closure of operating theatres, with open-heart surgeries and other procedures being cancelled (thanks to the fuel crisis in early 2012, there were power cuts for 12-18 hours a day). A June 2011 Oxfam report stated that Gaza’s medicine shortage had reached ‘alarming proportions’, with a total of 178 types of medications and 123 types of medical supplies already having run out and others having reached their expiration date. The blockade also means that doctors are unable to upgrade their skills by accessing training outside Gaza.

The Gaza Strip is 41km long and between 6 and 12 km wide (365km²). It is home to almost 1.6 million– rendering the population density 4,353/km², more crowded than Tokyo. In Gaza City there are 16,500 to every square kilometre. Such extreme overcrowding leads to poor hygiene and public health.

In addition to overcrowding, there is also a severe shortage of homes. Of the 3,500 homes destroyed during Operation Cast Lead, only 1000 have been rebuilt. This is largely due to the dearth of construction materials as a result of the blockade.

In 2011, Israeli airstrikes destroyed $1.3 million of water and sanitation infrastructure, including the sewage pumping station that connected 130,000 residents of refugee camps to Gaza’s main sewage system.

In addition to the human and material losses the conflict has caused, there has also been a significant psychological impact on Gazans. A 2010 Médecins sans Frontières report noted that, “What is so particular about Gaza is that there was an accumulation of acute events on top of a chronic, already complex situation. Generally speaking, everything is complicated: the over-population, the embargo, the problems of moving about, the weakening of social and family ties. The living conditions that aggravate psychological and psychiatric fragility.” In the three weeks of Operation Cast Lead, MSF made the same number of mental health interventions as they would normally expect to make in three years.

According to the Gaza Community Mental Health Programme, 95% of Gazans feel imprisoned and depression has increased by 18% since the start of the blockade. In addition, the threat of conflict means that 59.4% of primary school students and 69% of preparatory school pupils in Gaza did not feel safe on their journey to and from school some or most of the time.

On 14 December 2012 Israel launched another wide-scale military offensive against Gaza, its infrastructure and Hamas. Operation Pillar of Defence lasted for 8 days.

65% of Palestinian deaths were civilians.