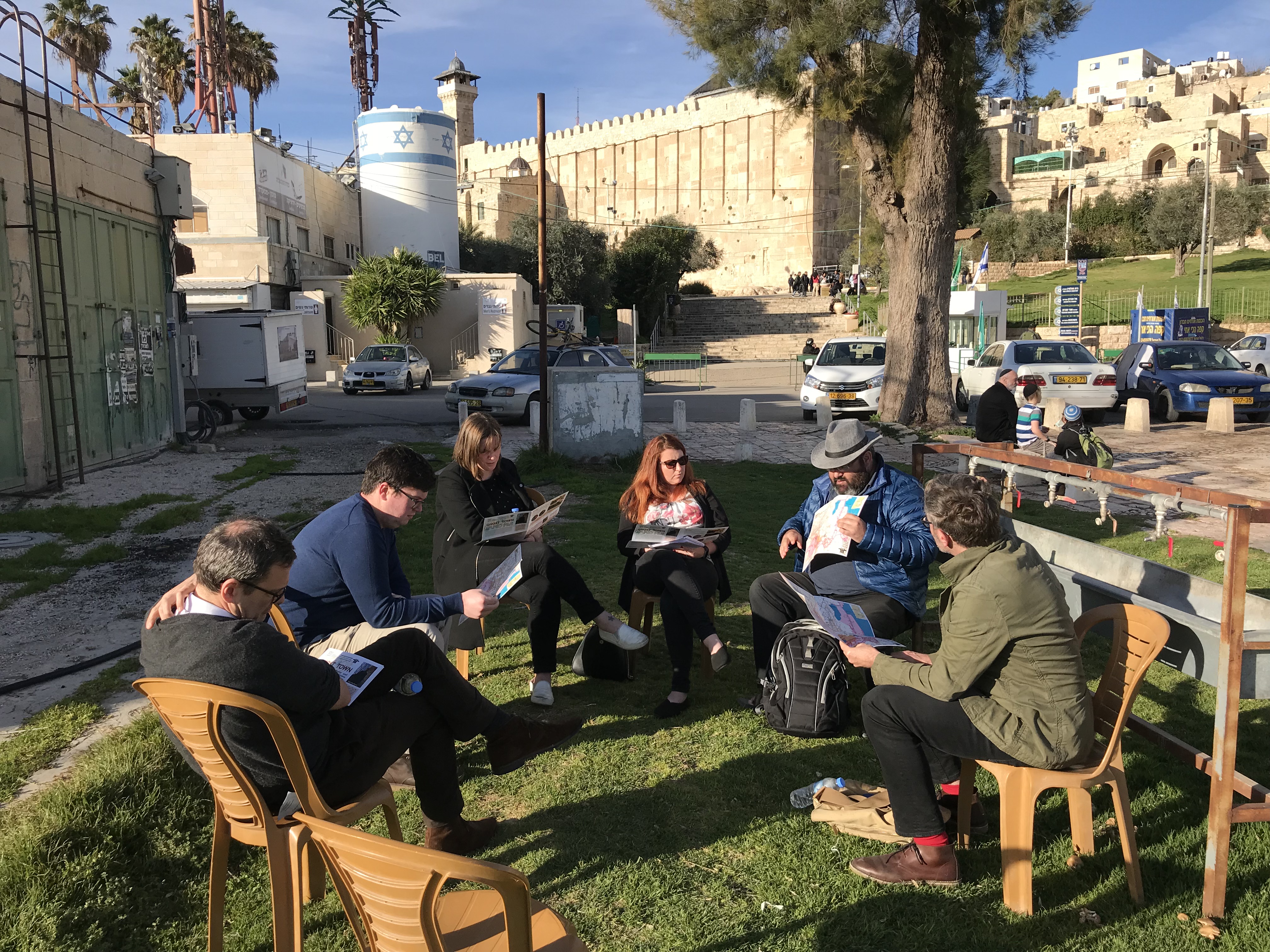 The delegation had meetings with both Palestinian and Israeli officials and organisations, as well as the British Consul General and DFID in Jerusalem, and was briefed on the current situation in the West Bank and Gaza by the UN. There were also meetings with Human Rights Watch, Israeli NGO Gisha, Save the Childrenand activists from Gaza. MAP’s report of the visit can be read here.

At Aida refugee camp, representatives from UNRWA (United Nations Relief and Works Agency) spoke about the detrimental effects of US funding cuts on services (including education and healthcare) for Palestinian refugees – not only in the West Bank and Gaza, but also in Jordan, Lebanon and Syria. The delegates were given a tour of Aida refugee camp and were given the opportunity to speak to residents, visit an UNRWA school, and see the impact of the separation Wall. Among the things that were discussed were the increase in violent raids into the camp by Israeli security forces and frequent clashes between youth and Israeli soldiers. A particularly frightening trend in Aida is the excessive use of teargas. A recent report by academics at the University of California, Berkleyfound that 100% of Aida’s residents had been exposed to teargas in the last year, making it the place mos exposed to teargas in the world, and that teargas use was “widespread, frequent and indiscriminate.” More about this report can be read here. 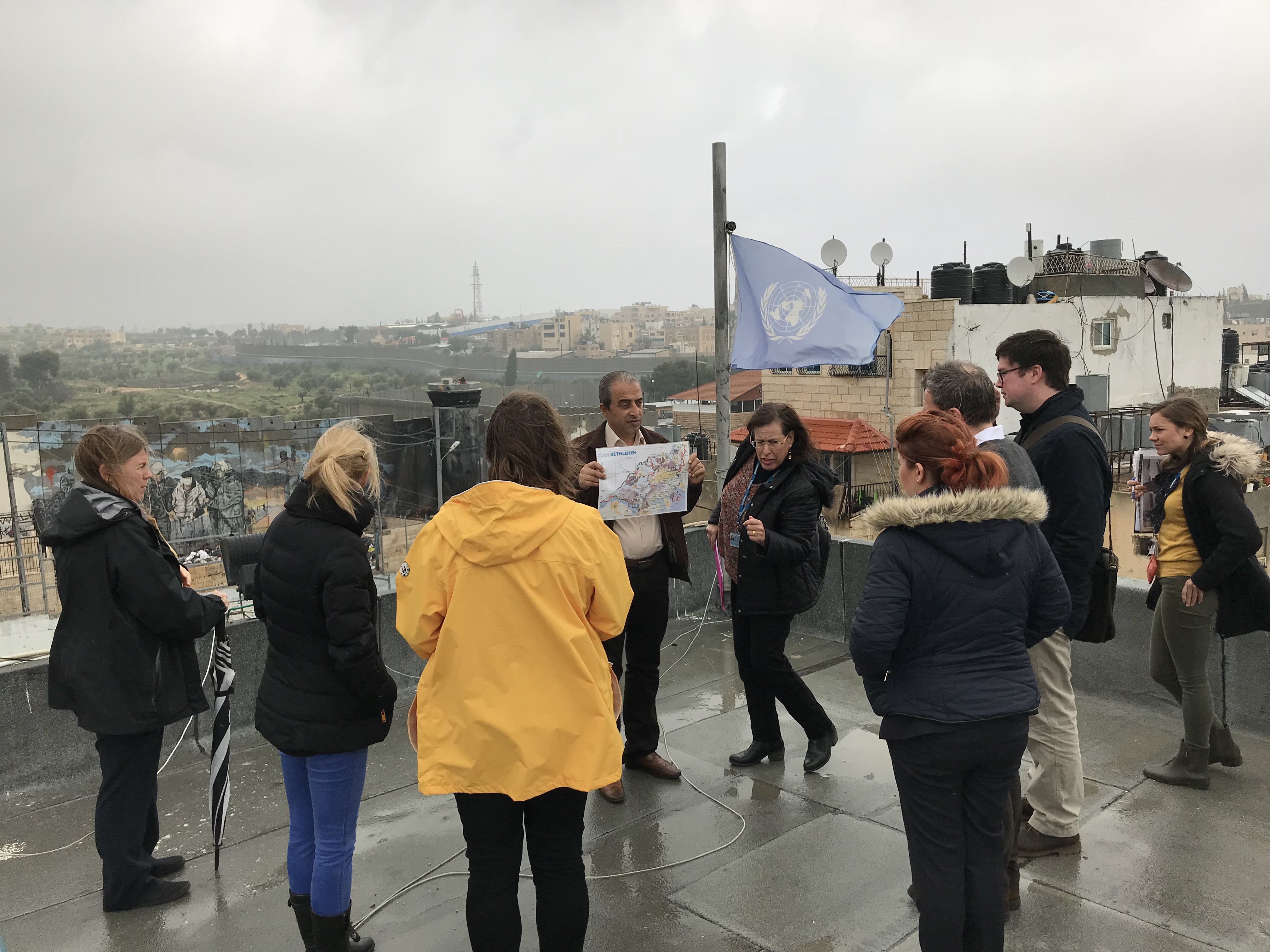 The delegation was briefed on the tense and deteriorating geopolitical situation in Jerusalem by the Jerusalem Legal Aid Centre (JLAC). The repercussions felt by US President Donald Trump’s announcement to recognise Jerusalem as Israel’s capital were discussed, as well as issues such as residency rights for Palestinians in Jerusalem, significant demographic changes in the city, settlement expansion (including the E1 plan which would include the demolition and forcible transfer of Palestinian Bedouin communities, and the Greater Jerusalem Bill which would effectively force out some Palestinian communities and annex 19 illegal Israeli settlements around Jerusalem including Ma’ale Adummim), and increased demolitions of Palestinian homes in Jerusalem. 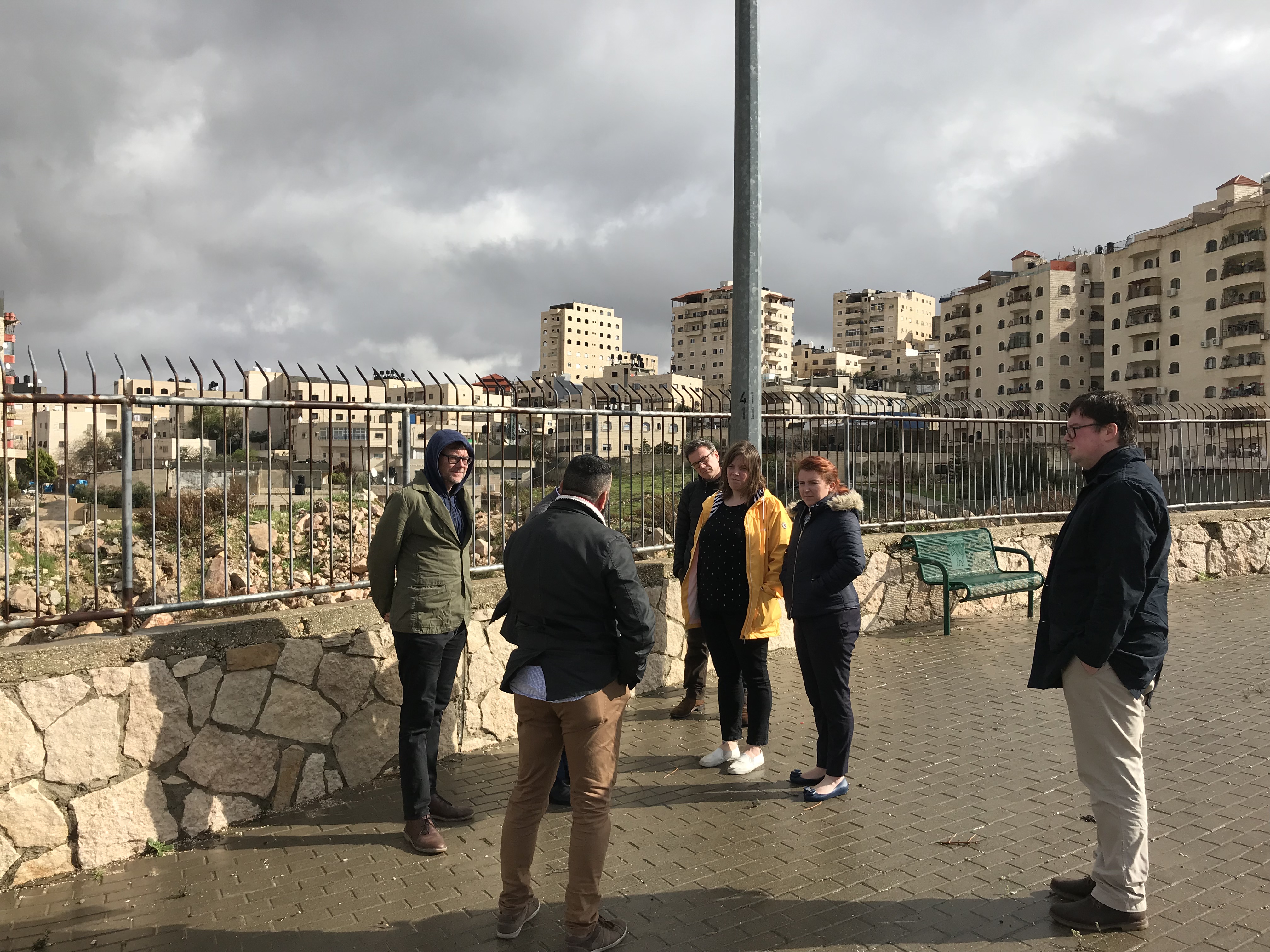 JLAC took the delegation to the Mount Scopus viewpoint to see the impact of the strategic E1 settlement project that would sever Jerusalem from the West Bank and the effect it would have on the Bedouin communities in this area. The delegation saw the separation wall between the settlement of Pisgat Ze’ev and Shu’fat Camp and Anata (both Shu’fat Camp and Anata as well as Kufr Aqab would be severed from Jerusalem under the Greater Jerusalem Bill). The delegates were also given a tour of the Old City. 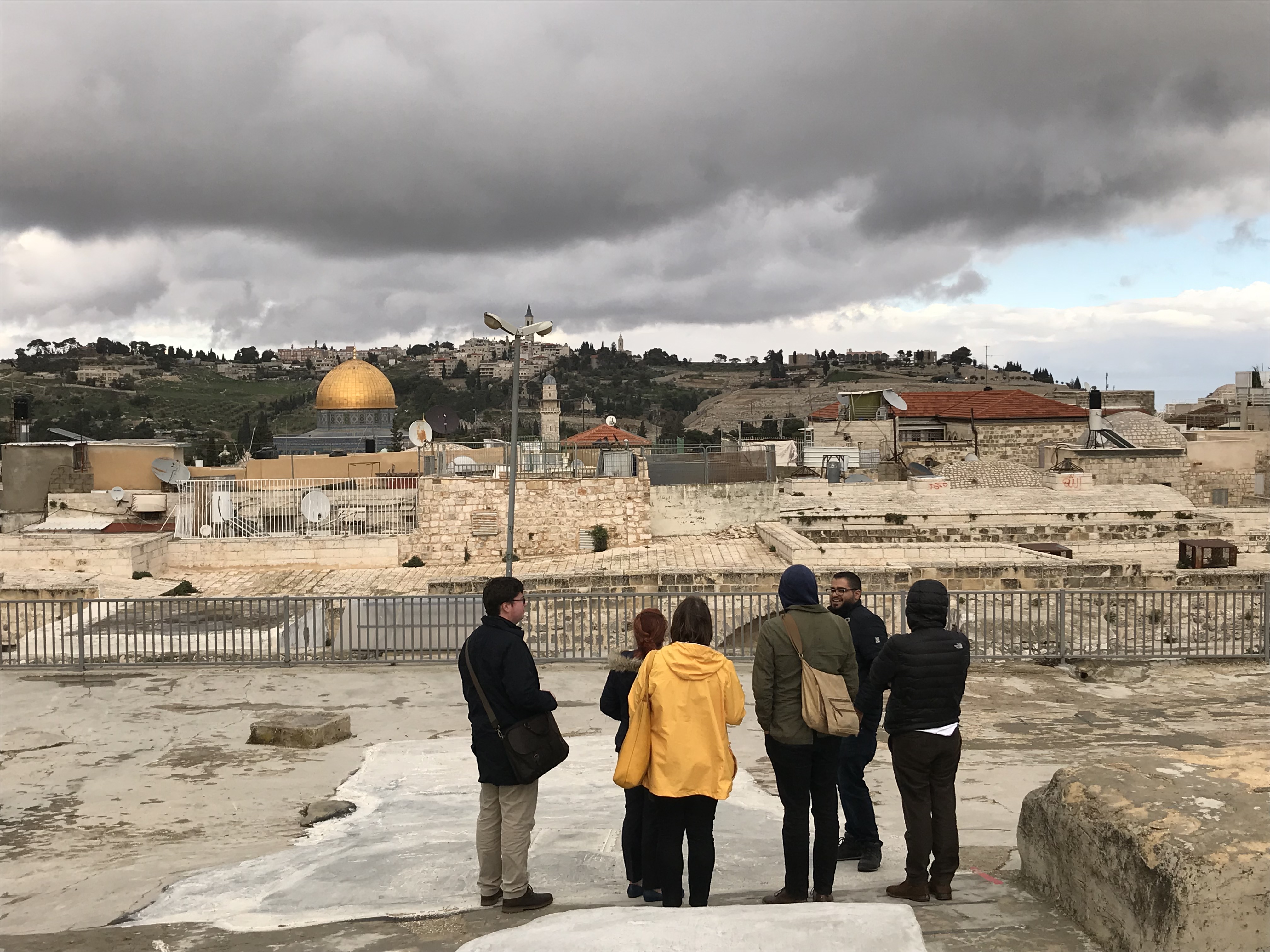 Staff at the Makassed Hospital welcomed the delegates and gave them an overview of the work of the hospital and the challenges faced, including restriction on movement for both staff and patients. The delegation was unable to meet the hospital’s Director Dr Rafiq Husseini (a British citizen and Jerusalem resident whose residency was removed by Israel several years ago), who was denied re-entry into Israel and subsequently had to resign as the hospital’s director.

The delegation visited the neo-natal and neurology wards of the Makassed hospital. In both wards, they were introduced to patients by doctors from Gaza who were being sponsored by Medical Aid for Palestinians. Three of the patients in incubators in the neo-natal ward were triplets from Gaza, born prematurely. The only reason that their mother was still in hospital in Jerusalem and not back in Gaza already was because they were born by C-Section, and an infection after the operation meant that she had to stay longer. However, she would soon have to return to Gaza without her babies as the permit would expire. In the neurology ward, the delegates also met a 10 year old boy from Gaza who has a brain tumour and was having to undergo a very risky and difficult operation the next day. Israeli authorities refused to grant permits to his parents and grandparents to travel with him to Jerusalem for his operation, and instead had to travel with the sister of his grandfather who was granted a permit. 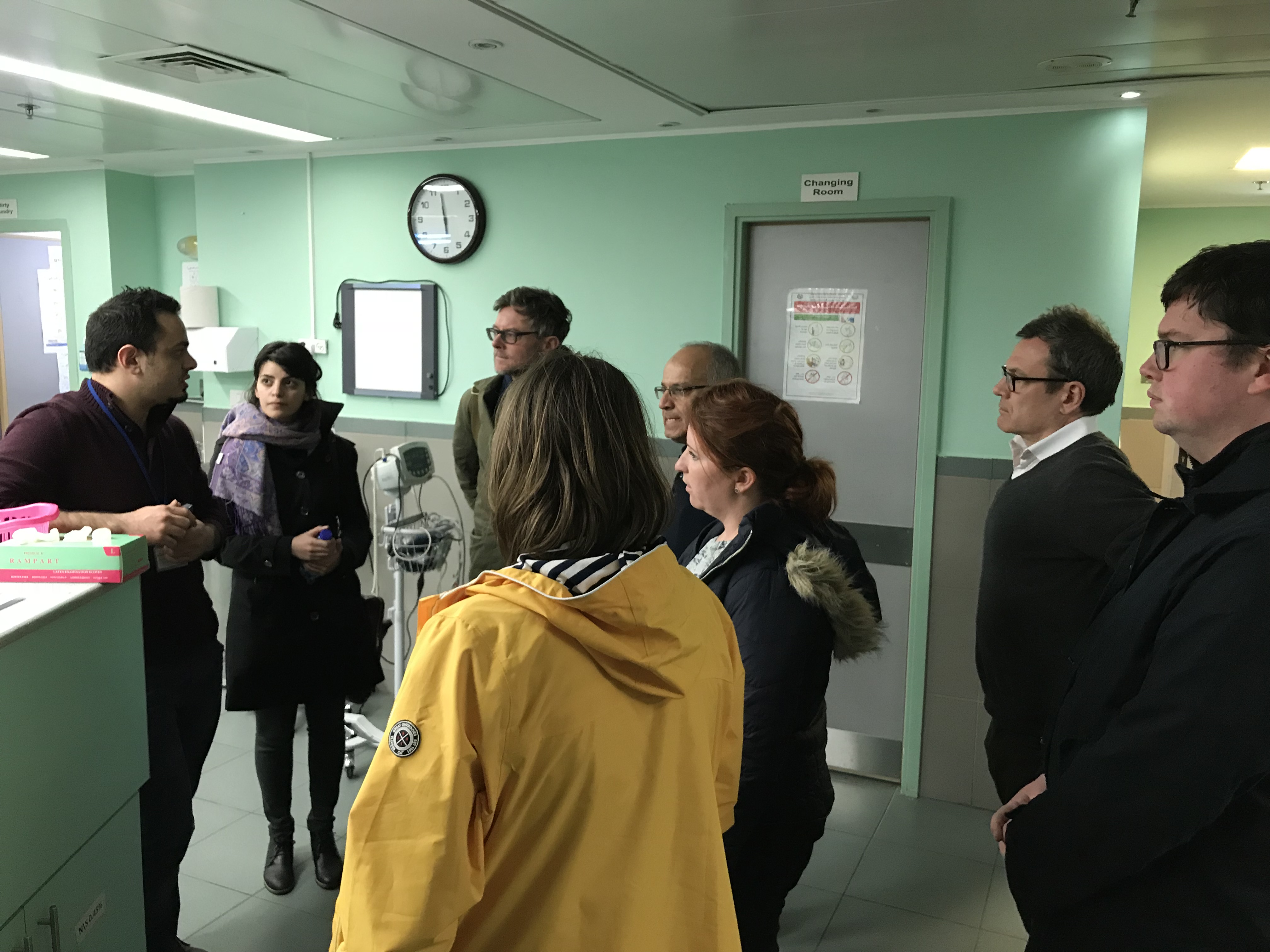 A joint statement issued by the Al Mezan Center for Human Rights, Amnesty International, Human Rights Watch, Medical Aid for Palestinians (MAP), and Physicians for Human Rights Israel (PHRI), highlighted the record low in Israel issuing permits for patients from Gaza seeking vital medical treatment. In 2017, 54 people died whilst awaiting permits. Israeli authorities approved permits for medical appointments for only 54% of those who applied in 2017, the lowest rate since the World Health Organization (WHO) began collecting figures in 2008.

The Military Court at Ofer

Gerard Horton and Salwa Dubais of Military Court Watch briefed the delegation on the military detention of Palestinian minors by Israel, and the systematic approach used towards child detainees by Israeli authorities across the West Bank. Issues covered included night time arrests, the right to silence, lack of access to lawyers and family, and being forced to sign documents in Hebrew rather than Arabic.

At Ofer Military Court, the delegation witnessed several military trials – including those of minors. It was the day after the trial of Ahed Tamimi. They also met with the families of those awaiting trial, which included a 17 year old boy arrested at 02:30, when soldiers quietly broke the front door and then began making chaos in the lounge, and then entered the children’s bedroom and told them to wake their parents. The soldiers turned over the house looking for a slingshot. The family said that in total, 30 soldiers entered the house, and the commander of the unit demanded that the father signed a document without reading it, which he refused to do so. Another mother was waiting for the trial of her 15 year old son who had already been in prison for two and a half months, who went to protest Trump’s announcement on Jerusalem and was arrested for stone throwing. He was shot in the leg with a rubber bullet and hit in the head with the back of a gun. In both cases, the two boys will plead guilty, which will likely mean 6 months in prison, which was seen as a “good deal”.

According to Military Court Watch’s figures, 98% of Palestinian children arrested are from within 1.02km of an illegal Israeli settlement, and at the end of November 2017, 313 children aged between 12 and 17 were held in military detention. You can read their latest briefing note here.

In the historic centre of Hebron, Shuhada Street, the delegation were briefed on military operations by the Israeli army in the West Bank and Gaza by Israeli organisation Breaking the Silence, who have recently published a new set of testimonies from ex-soldiers. You can also watch Breaking the Silence’s director Avner Gvaryahu speaking on BBC Hardtalk. 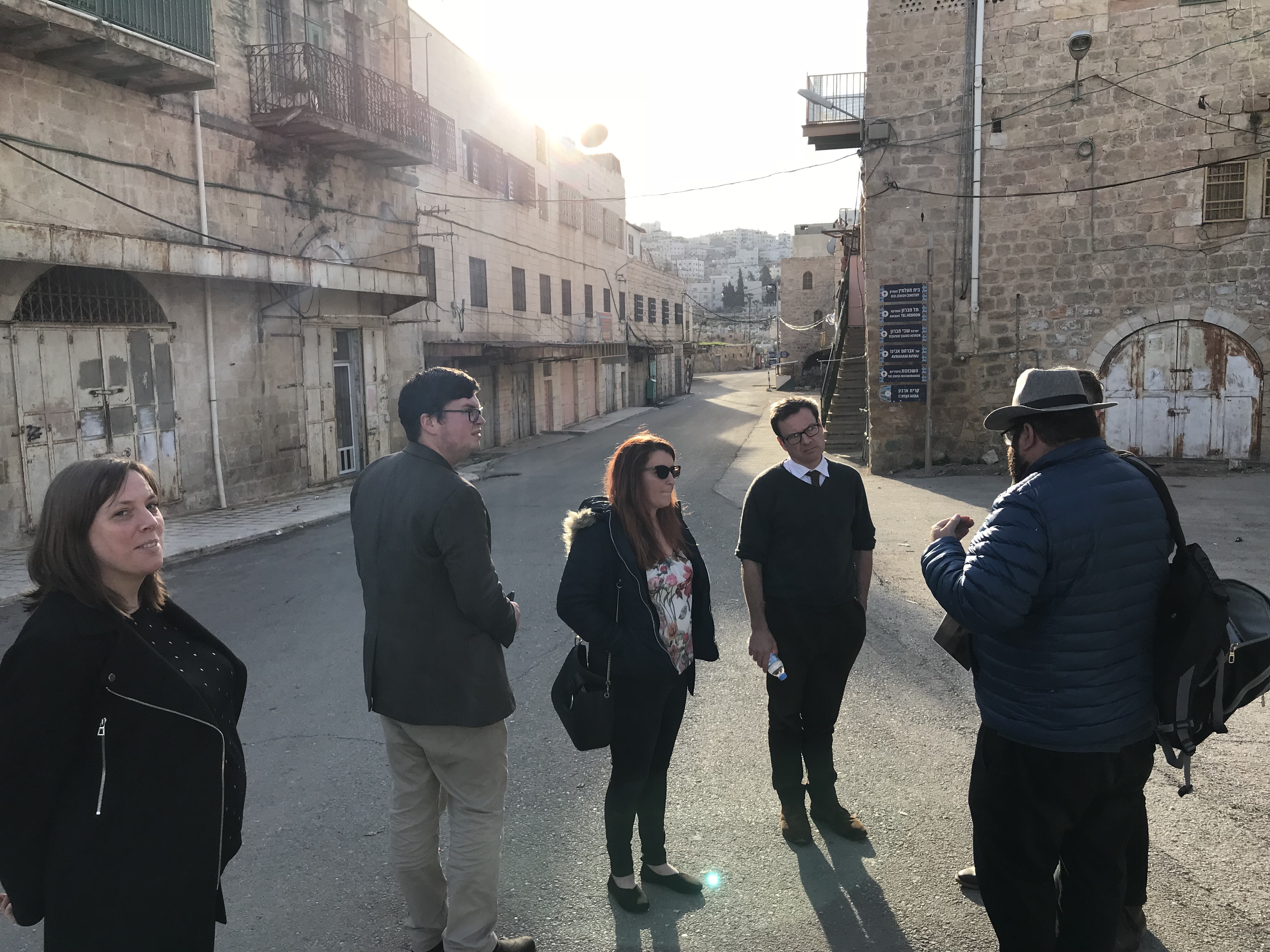 The delegates were given a tour of the “sterilised” zones of Shuhada Street (under full Israeli military control). While the whole area of H2 in Hebron is free for settlers to walk and drive in, it remains restricted for Palestinians. Palestinians are unable to drive in large sections of H2, and areas of Shuhada Street remain completely closed for pedestrians, cars and shops (many of which were welded shut).  Citing the protection of a few hundred settlers living in the heart of the city, the army severely restricts the movement of tens of thousands of Palestinian residents. The tour included witnessing the settlements within Hebron itself, and what was once the bustling bus station, fruit and vegetable market, meat market and jewellery market. 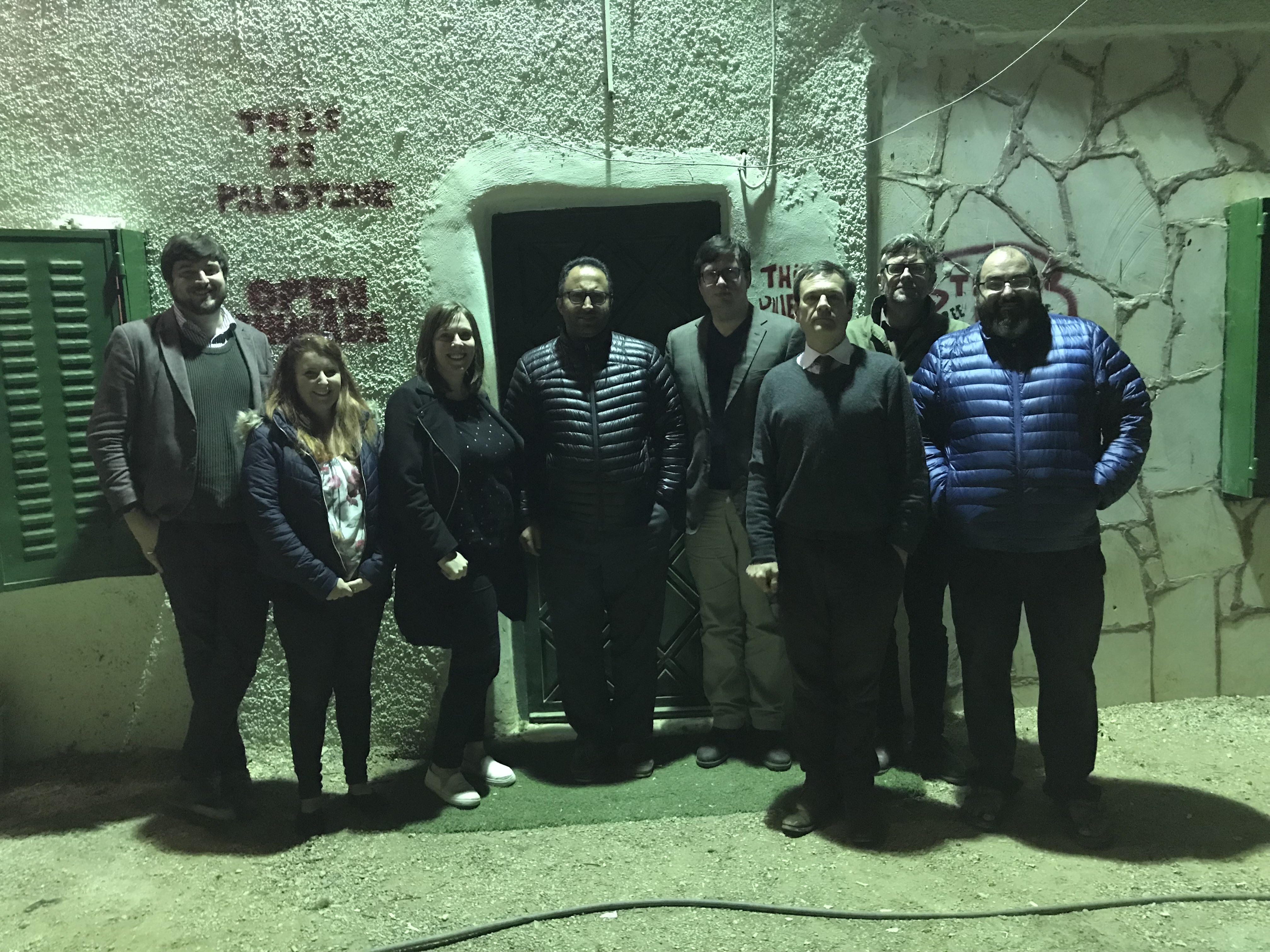 Palestinian human rights activist Issa Amro also met with the delegation, and spoke about his non-violent activism with his organisation Youth Against Settlements and their campaign Open Shuhada Street. Amro has various charges against him issued by both Israel and the Palestinian Authority. Their centre is next to the illegal Israeli settlement in Hebron of Tel Rumeida, and are frequently intimidated and hassled by the military and settlers. The delegation also visited and drove through the settlement of Kiryat Arba on the outskirts of the historic centre of Hebron.

Medical Aid for Palestinians’ mobile clinic visits many Bedouin communities in the West Bank providing primary healthcare. Women and children, and the elderly mostly use the mobile clinic. Child malnutrition and stunting are on the increase. 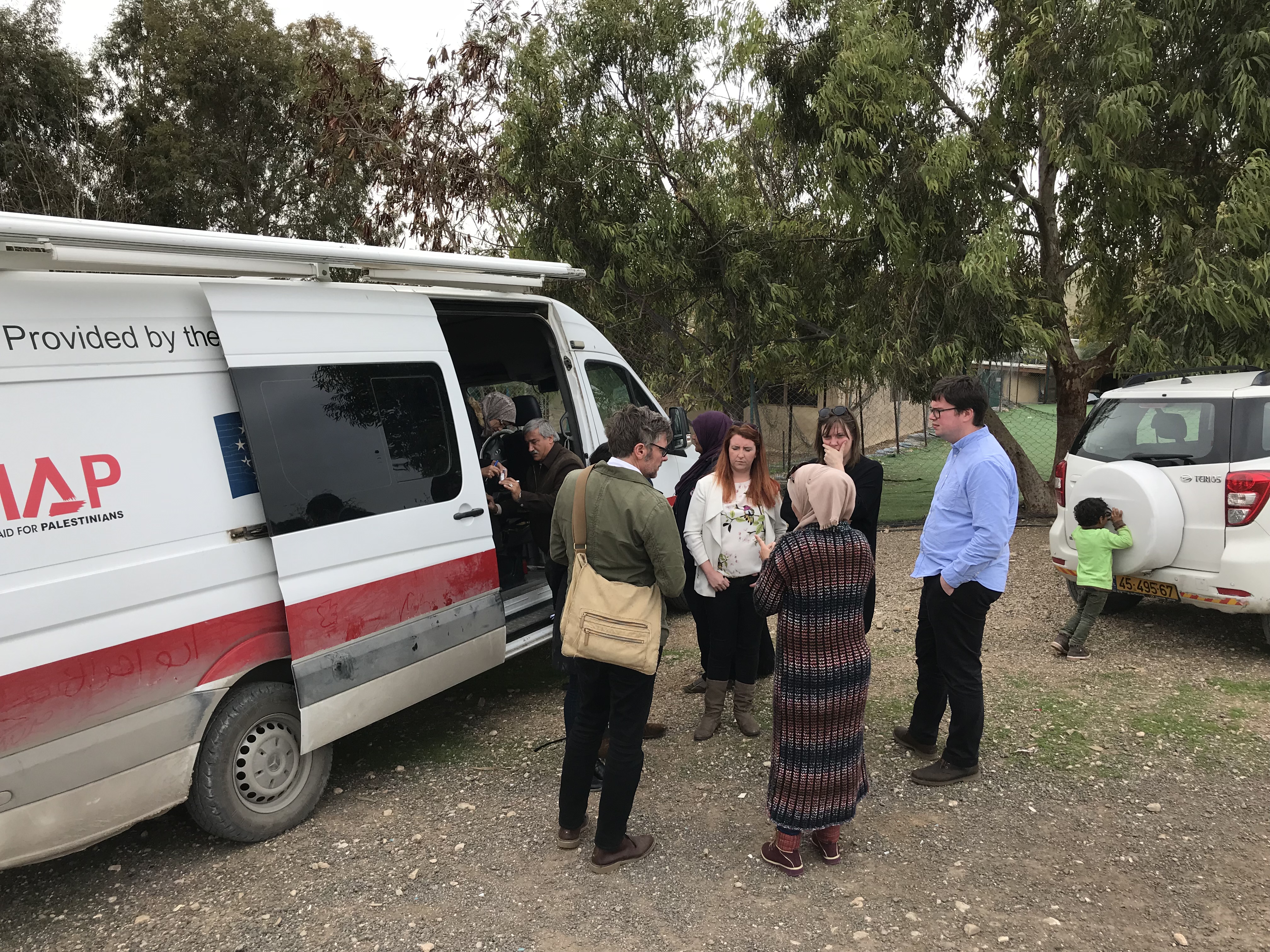 The delegation were briefed by community leader Abu Khamis. The whole community is under threat of demolition, including the community’s school made from mud and used tyres. The State of Israel said on 24 September 2017 that it plans to evict and carry out demolition orders in Khan al-Ahmar by April 2018 in a response to the High Court. Israeli human rights organisation B’tselem have said that “the state was asking the court to authorise a war crime.”  Khan al Ahmar is next to the illegal Israeli settlement of Kfar Adumim, which is home to Israel’s current Minister of Agriculture and Rural Development, Uri Ariel, and also lies within the strategic E1 settlement plan. 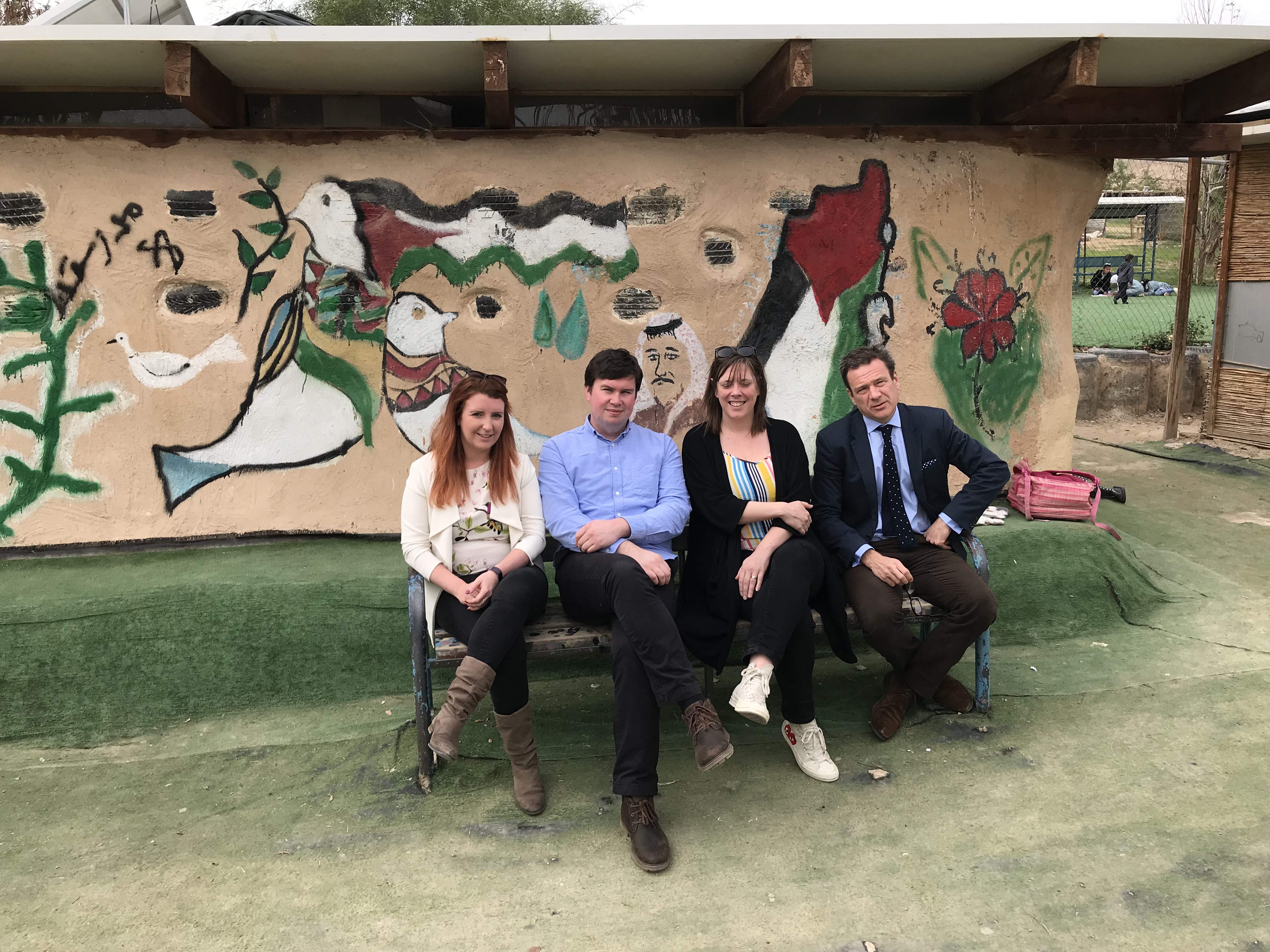 Many Caabu delegations have visited Khan al Ahmar, and have written to the UK Government calling on it to do all it can to halt the demolition, including this letter to Foreign Office and DFID minister Alistair Burt in September 2017. 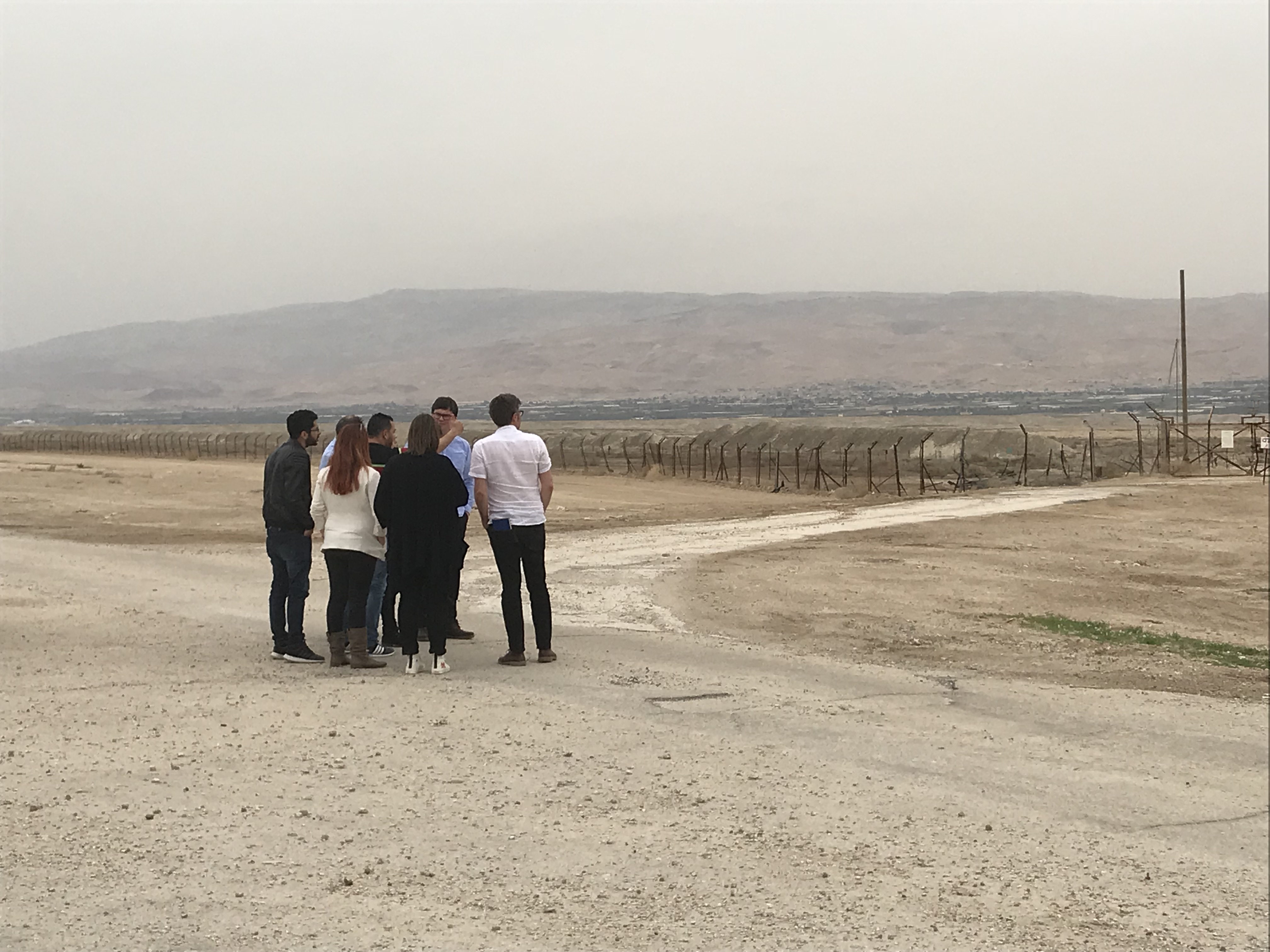 Recently, Al Haq produced two reports: Settling Area C: The Jordan Valley Exposed and Unpacking Gender in Coercive Environments: The Case of the Jordan Valley. These reports and more information about them can be found here.

The delegation had the opportunity to witness illegal industrial settlements, which largely produced dates, bell peppers, cacti and other produce, and factories within settlements. There are severe building restrictions for Palestinians in Area C, and Jordan Valley has seen numerous demolitions of homes, other structures such as animal pens, factories and infrastructure projects. 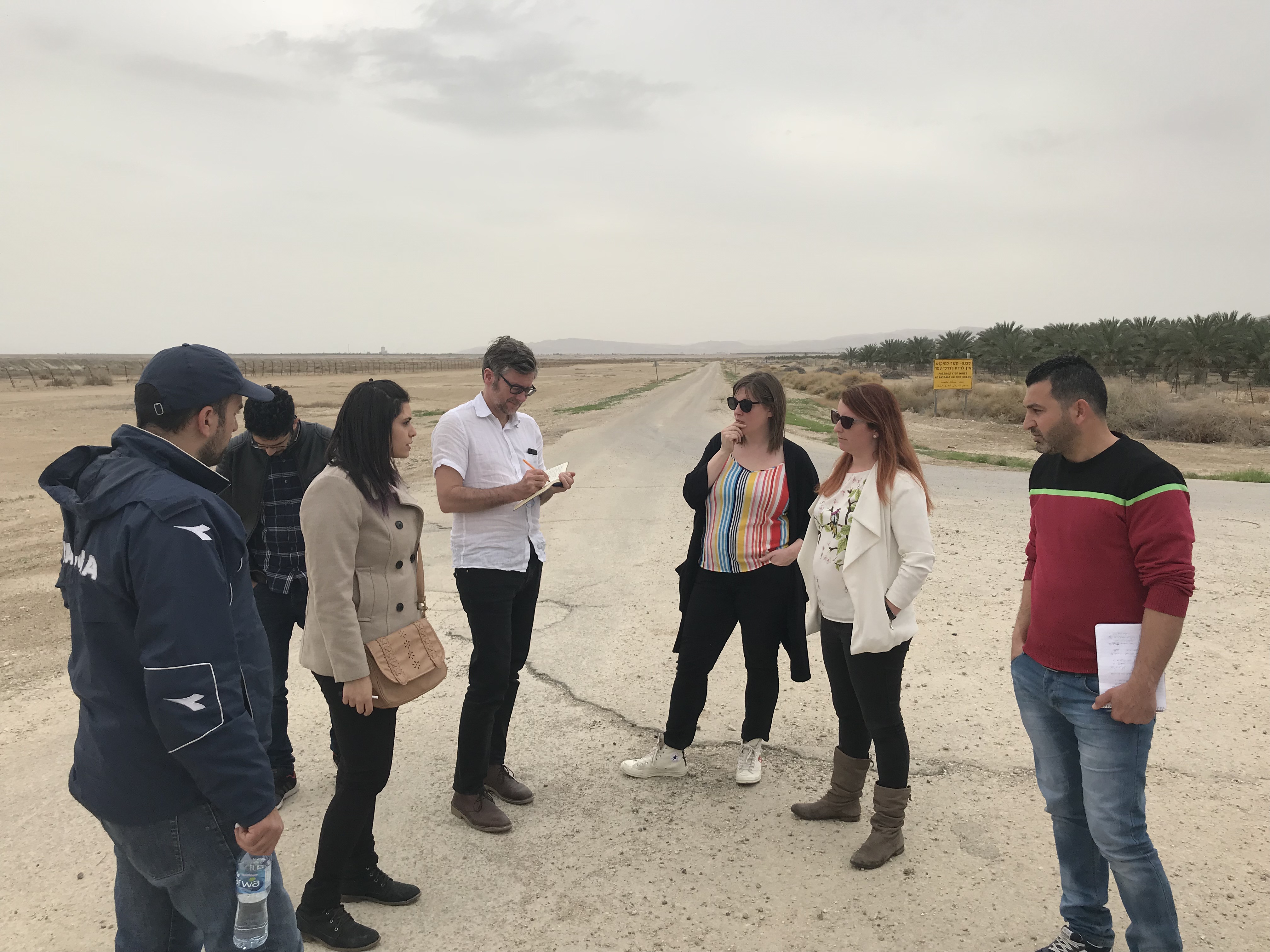 In the area of Althoure, near Silwan in East Jerusalem, the delegation visited the Althoure Silwan Women’s Center together with the Women’s Centre for Legal Aid and Counselling (WCLAC) and Oxfam. They spoke to women about the difficulties faced as women living under occupation, and the difficulties faced living in patriarchal societies. Some of the women the delegation met spoke about the arrests of children and the impact this had upon mothers in particular, gender based violence and about demolitions, which often occur in this area. 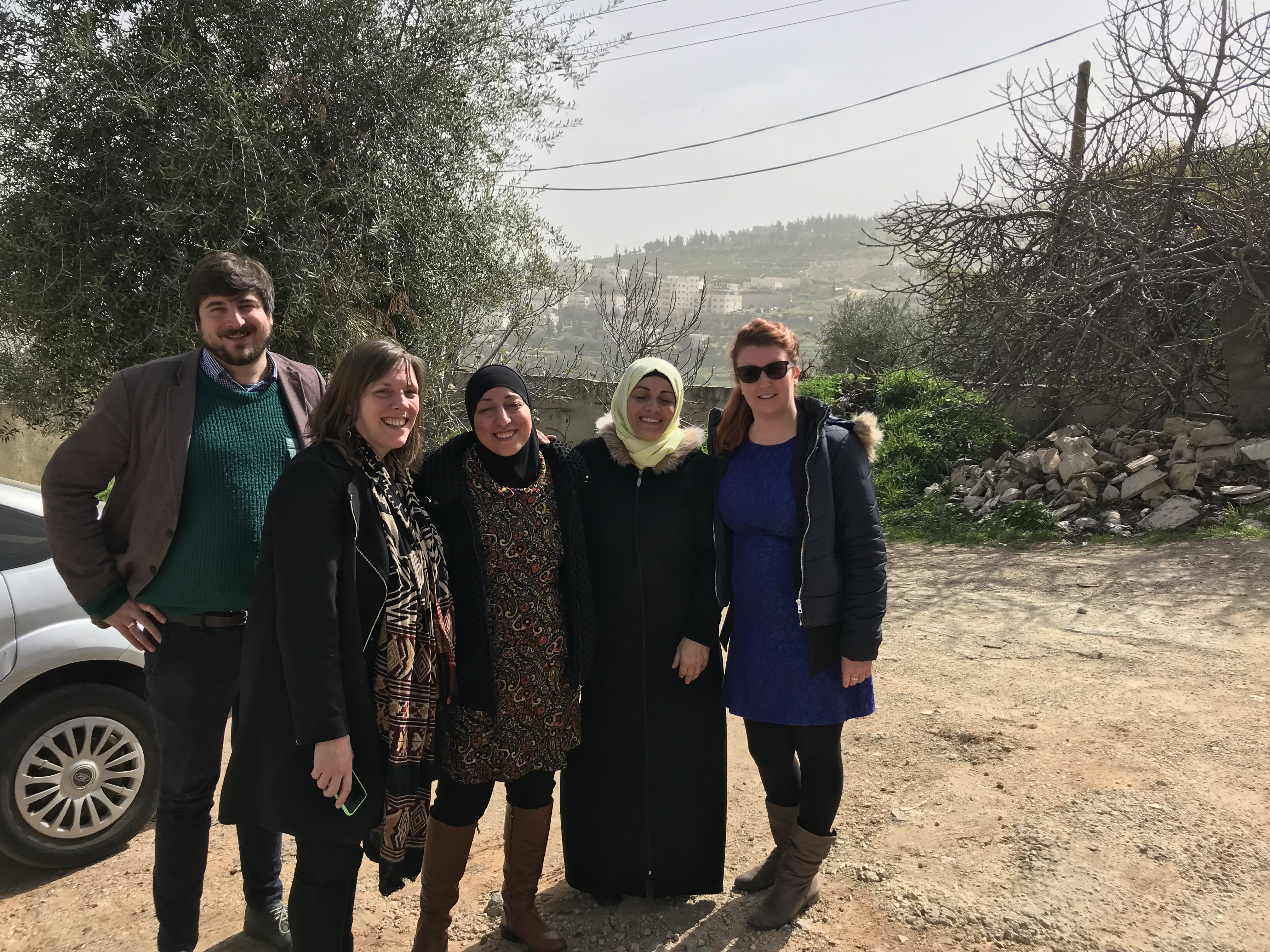