Chris is the Director of Caabu and its lead spokesperson. As an acknowledged expert on the region, Chris is a frequent commentator on TV and Radio.  He gives numerous talks around the country on numerous issues including the Arab Spring, Libya, Syria, Palestine, Iraq, Islamophobia and the Arabs in Britain. He regularly has articles published in the British and international media..

He has worked with the Council since 1993 after graduating with a first-class honours degree in Arabic and Islamic Studies at Exeter University. Since then he has travelled widely in the Middle East and North Africa. In 1996 Chris moved to work for a professional government relations firm but returned to a more senior role at Caabu in 1997. In November 2002, he was made full-time Director. 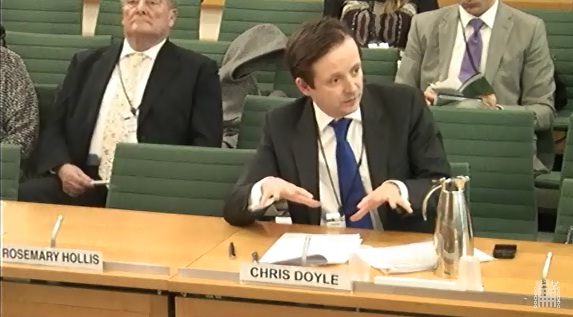 Chris appeared as an expert witness in front of the Foreign Affairs Select Committee in Parliament discussing UK relations with the Gulf.

He has spoken at numerous international conferences. In the past, he has given talks at Chatham House, RUSI, the Dubai Press Club and the annual Doha Forum on Free Trade and Democratisation in Qatar.

On 29th November 2005, Chris addressed the United Nations on the occasion of the International Day of Solidarity with the Palestinians. His statement was delivered on behalf of the International Coordinating Network on Palestine. He urged members of the UN General Assembly to increase their efforts to establish a meaningful peace process with the aim of creating a viable Palestine state on the territory occupied in 1967.

Chris writes for a number of journals about the region and was the UK correspondent for Middle East International covering all aspects of the British relationship with the Middle East.   He was a Visiting Lecturer at St. Mary's College, University of Surrey, lecturing on religion in the Middle East. He was also Chair of Friends of Birzeit University and a former trustee of Medical Aid for Palestinians. He is also a member of the Royal Institute for International Affairs.

Chris was the winner of the Editor's Special Achievement Award at the Arabian Business London Awards 2019. Chris also received the 2015 Annemarie Schimmel Award for Excellence in championing a Muslim cause.   He also won a Special Tribute award from the Arab Screen Independent Film Festival in 2001 for his work with the media.

His articles in the Independent can be seen here, on CNN here Middle East Eye here and the Guardian here.  He had a regular column in Al Arabiya which can be read here and currently writes in Arab News here.