Respect and support the independence of the ICC on Palestine, Caabu Chair David Jones MP urges the Prime Minister

Caabu's Chair and senior Conservative MP Rt Hon David Jones has written to the Prime Minister Boris Johnson (and also the Foreign Secretary Dominic Raab) about his views on the decision of the International Criminal Court (ICC) to initiate an investigation into possible war crimes in Palestine.

In the letter he writes:

"The role of the ICC is to investigate alleged war crimes without fear or favour. Whether Israel - or, indeed, any other country in which an investigation is proposed - is or is not an ally should surely never be a consideration. The United Kingdom's consistent and internationally-acknowledged adherence to the rule of law should mean that we respect and support the decision of the ICC, regardless of who it determines it should investigate, even if they include citizens of countries that are friends and allies."

He concludes the letter:

"Finally, I am deeply concerned as to the example we may be perceived to be setting. The United Kingdom as rightly sought to hold to account individuals in Russia, China, Syria and Myanmar, among other countries, for their crimes. We should, I suggest, now be seen to be supporting the work of the ICC and doing everything possible to ensure that the rule of law is applied impartially to all."

The letter from David Jones MP also follows the statement from various human rights groups and charities, including Caabu, which accused the Prime Minister of undermining the independence of the ICC.

The letter from David Jones is in full here: 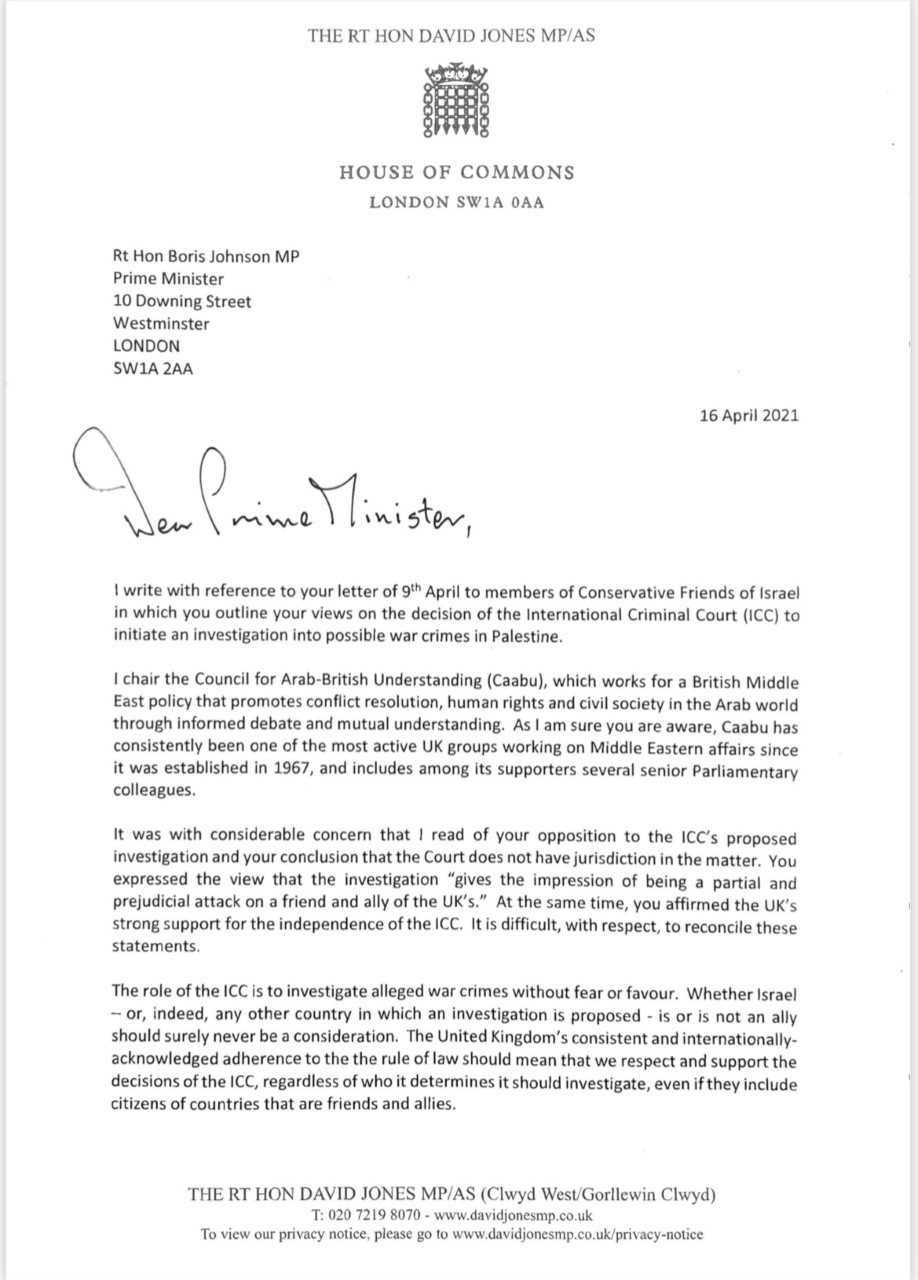 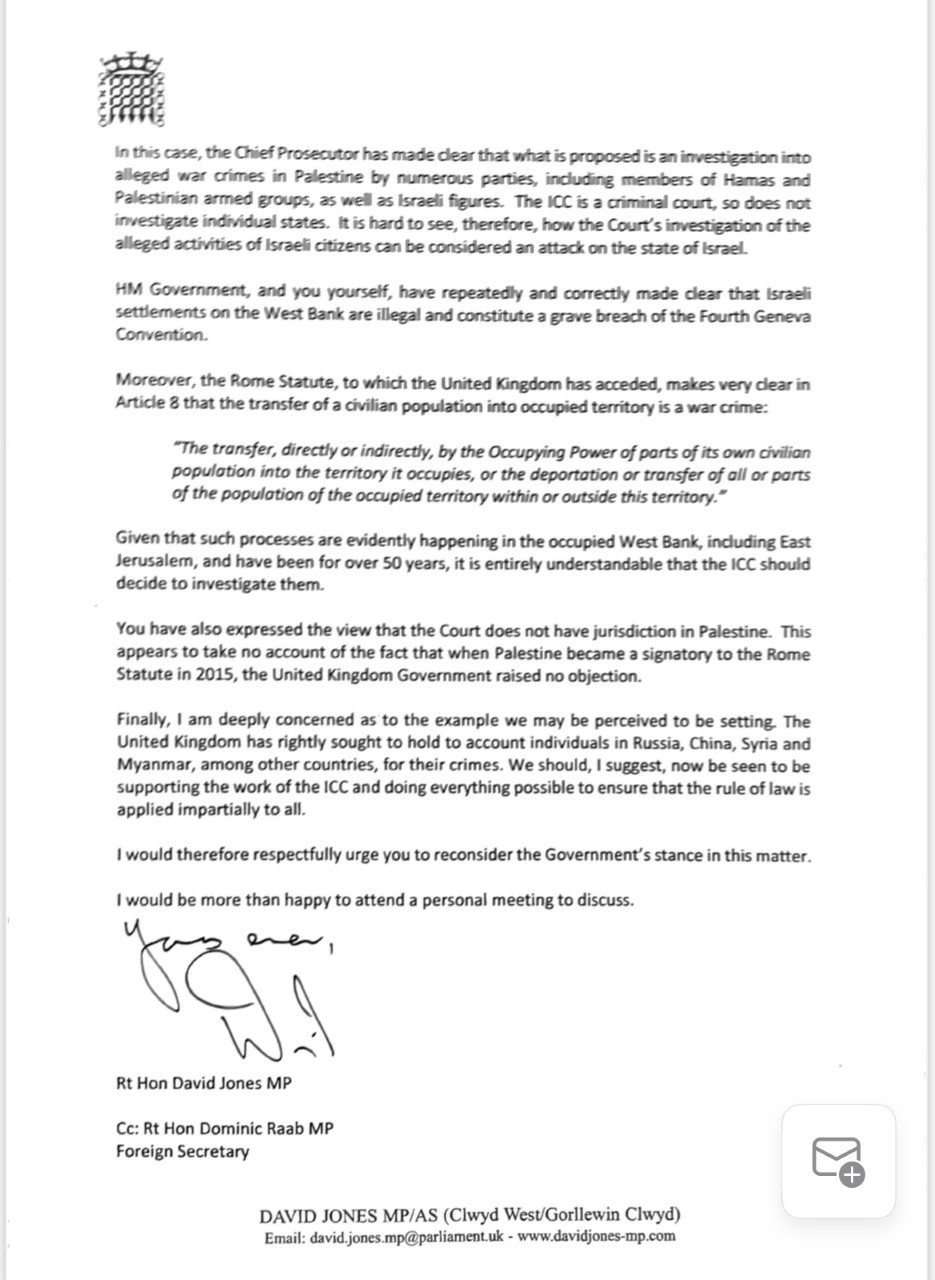 Labour MP and co-Chair of the Britain-Palestine All Party Parliamentary Group, Julie Elliott MP also wrote to the Prime Minister, Boris Johnson urging the UK Government “to support the independence” of the ICC investigation in the occupied Palestinian territory, and protect its independence, “rather than undermine it”.

"The ICC investigation will be examining the role of all actors who may have been party to committing war crimes. Given that the Court is investigating all parties, it is hard to argue that it is being partial.

This is a clear opportunity for the UK Government to support the independence of the Court, rather than to undermine it by issuing statements implying that the Court should not be investigating those who are considered a 'UK ally'. This flies in the face of judicial independence and international law. As the UK charities' statement states, the international community must be consistent in its support for accountability and the rule of law, regardless of the context." 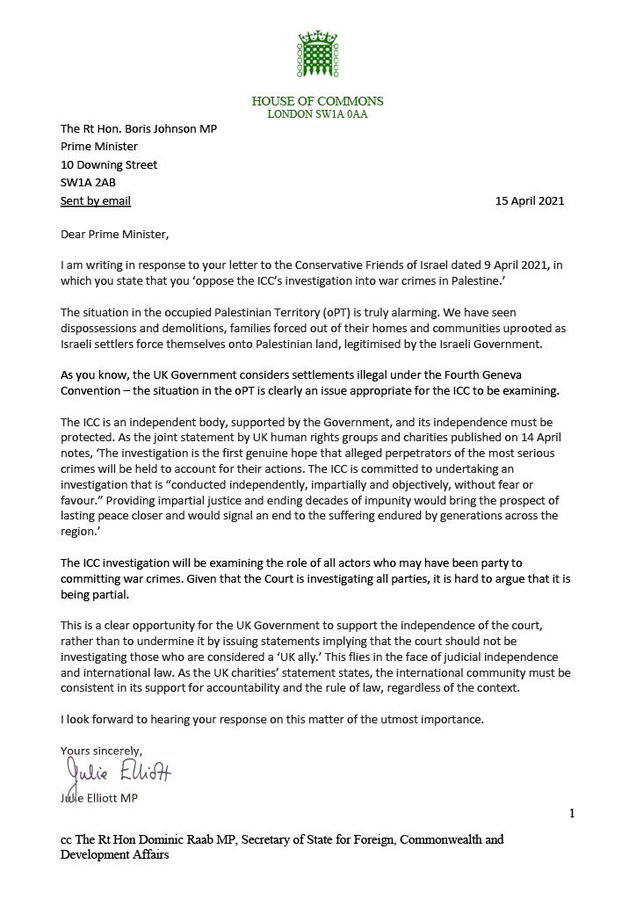