Over 60 UK Parliamentarians, from various parties, and from both the House of Commons and the House of Lords have written to the Foreign Secretary, Rt Hon James Cleverly MP calling for him to secure the release of pro-democracy activist and writer, Alaa Abd el-Fattah – a British citizen who has been unlawfully imprisoned in Egypt for nine years, and get him safely to the UK.

We are writing to you with urgency today, about the continued persecution and psychological torture of the pro-democracy activist and writer, Alaa Abd el-Fattah – a British citizen who has been unlawfully imprisoned in Egypt for nine years – in the hope that you can finally resolve his case and bring him safely back to the UK.

Alaa is not short of supporters in Westminster. His case was raised twice by former Prime Minister Boris Johnson and Liz Truss MP, as Foreign Secretary, told Parliament she was “working very hard for his release.” As Minister of State for the Middle East and North Africa, you wrote that you were “urgently seeking consular access”. That was on May 30th.

We write now to ask for urgency. Alaa’s life is at serious risk. He is out of hope and has been on hunger strike since 2 April 2022. Since 26 May, he has been consuming 100 calories a day - a teaspoon of honey and a bit of milk is all that’s been keeping him alive. Today he is on Day 189 of his strike. He may not live for much longer.

Alaa went on strike in order for the British Embassy in Cairo to have access to him, access that the Embassy has been denied for nine months now, despite repeated requests and seemingly in contravention of the Vienna Convention on Consular Relations, which in Article 36 expressly provides for the facilitation of consular access to imprisoned nationals. The Egyptian Attorney General has even questioned publicly the veracity of Mr Abd el-Fattah’s citizenship. This gives us grave concerns about the precedent being set for our constituents arrested in Egypt as well as other countries. We are particularly concerned that Egypt, a longstanding strategic partner of the UK, would act with seeming disinterest to our government’s legitimate duty of care for British citizens.

COP27, just a few days away, will be a moment of intense public scrutiny on Egypt. Several important British climate groups have already expressed concern that the conference will be used to paper over human rights concerns in the country. We understand that the UK government has lent significant support to the Egyptians to deliver a complex logistical operation, and to secure the legacy of COP26. We ask that you also ensure that the UK uses the opportunity to secure Alaa’s release.

Specifically, we support the recent call from dozens of international organisations asking for the unconditional release of all persons arbitrarily detained for exercising their rights to the freedoms of expression, peaceful assembly and association, before COP27. We ask that you use your good offices towards this end and bring Alaa Abd el-Fattah safely back to the UK. In doing so, you would complete a job started by your predecessor as Foreign Secretary and the former Prime Minister; you would secure a diplomatic win for Britain in a moment of increasing global instability, winning a significant victory for democracy worldwide and you would ensure that the essential climate negotiations remain the principal focus at COP27.

Alaa’s situation is so grave that it requires a robust message. In that light, we strongly encourage you to make clear to your Egyptian counterparts that Britain’s engagement with COP will be seriously undermined by the continued mistreatment of one of its citizens. 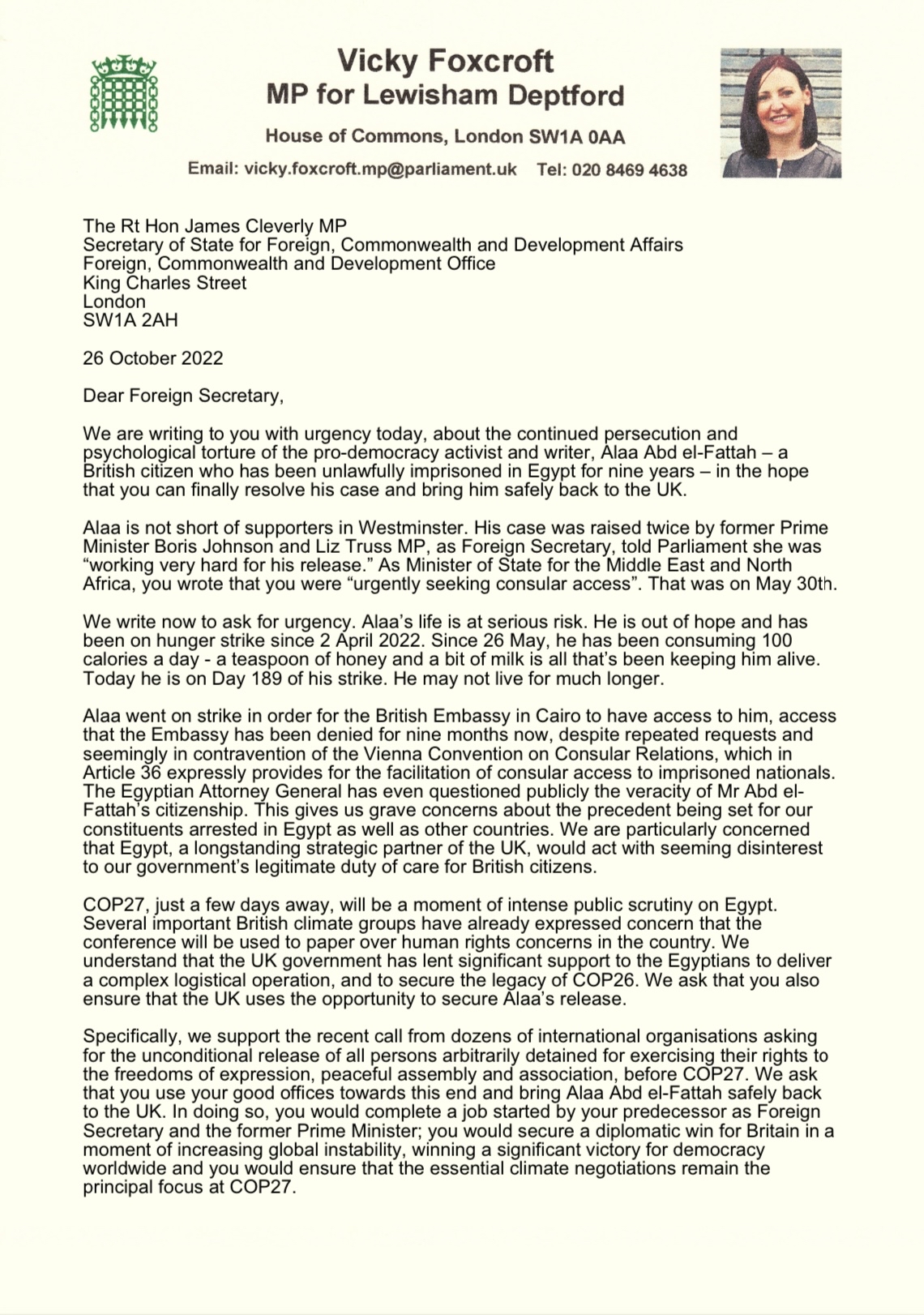 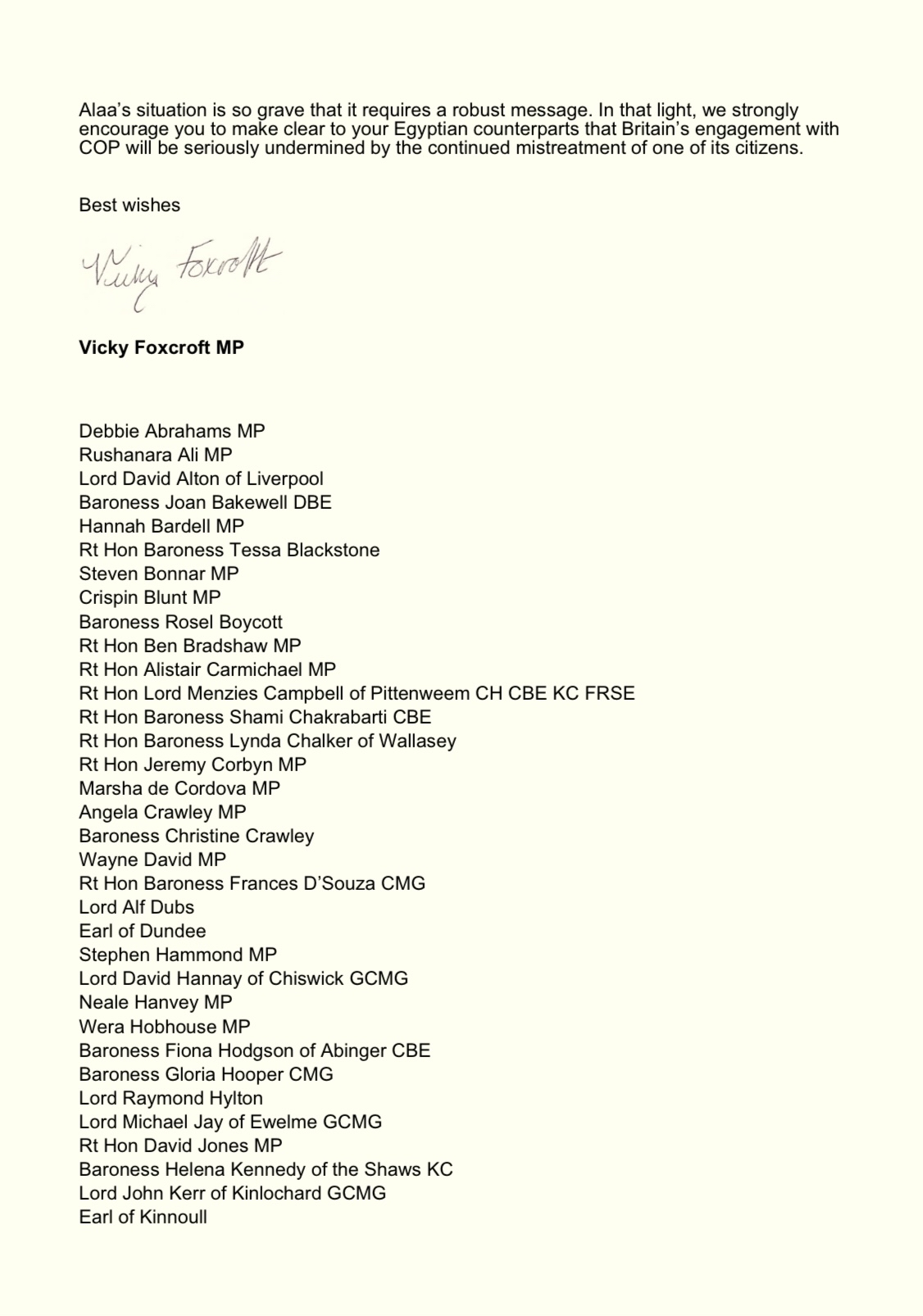 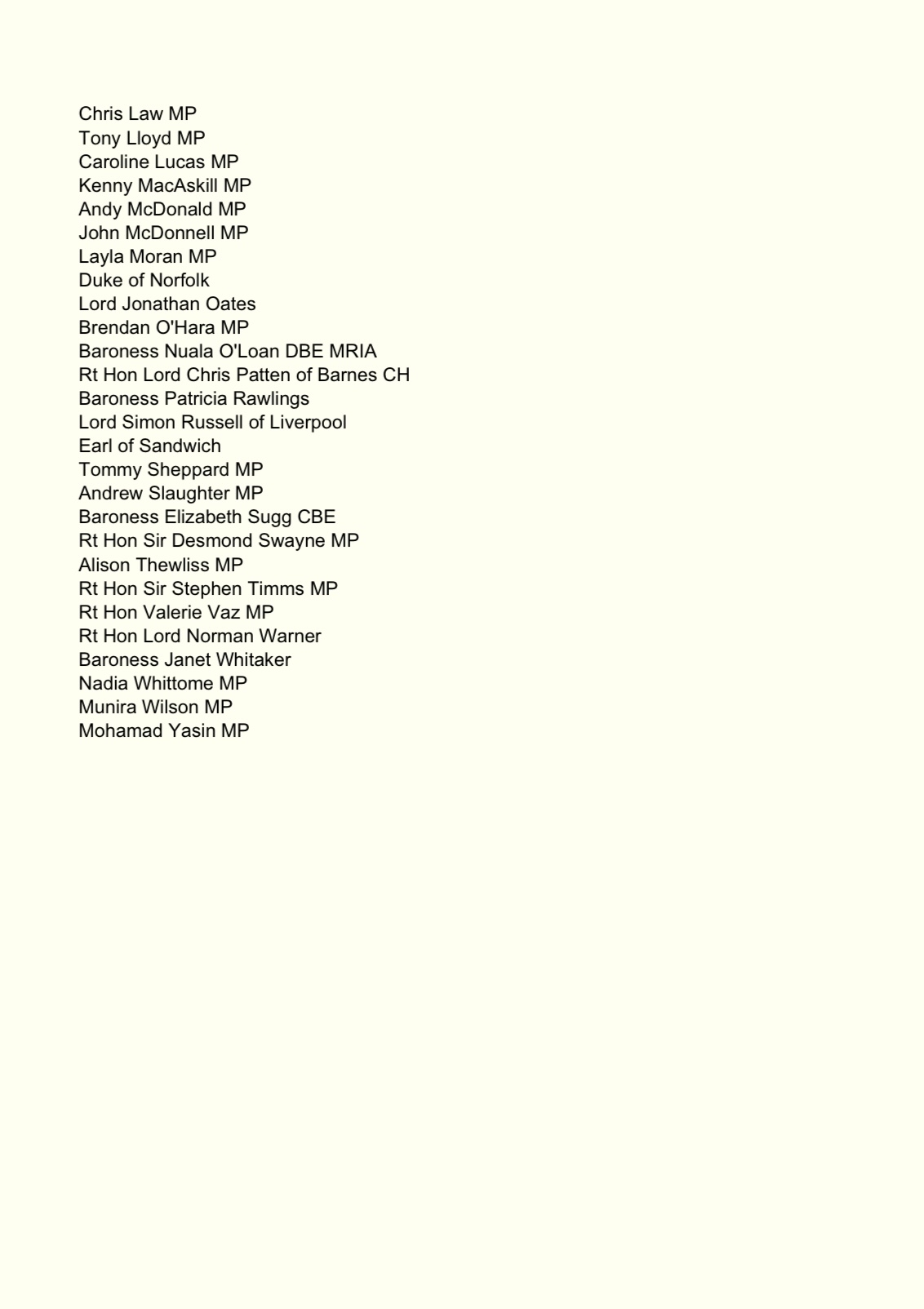