European parliamentarians (from national parliaments and Members of the European Parliament), have written to nine European Union Foreign Ministers, and the High Representative of the Union for Foreign Affairs and Security Policy, Josep Borell, about the formation of the new Israeli coalition government and the threatened plans which effectively amount to annexation of occupied Palestinian territory. This letter mentions specifically the intentions of the new Israeli government to forcibly evict and dispossess over 1,000 Palestinians in 14 villages from their homes in Masafer Yatta in the South Hebron Hills.

We are writing to you to express our grave concern about the annexationist policies of the  Government of Israel led by Netanyahu, building on the policies of its predecessors which have produced a one state reality: effectively, Israel controls the lives of Palestinians throughout the occupied Palestinian territory.

Prime Minister Benjamin Netanyahu has given the post of National Security Minister to Jewish supremacist Itamar Ben Gvir, and the Finance Ministry to Jewish supremacist Bezalel Smotrich. This  Israeli Government has made it clear that it will not abide by the Quartet Principles.  It will pursue annexationist policies, de facto or de jure. Such policies are already in motion and are being fast-tracked with the planned forcible eviction and dispossession of over 1,000 Palestinians from their homes in Masafer Yatta in the South Hebron Hills, vulnerable communities which have already faced home demolitions, the destruction of livelihoods and forced dispossession for years.

Netanyahu has promised to “legalise” outposts which are illegal under both Israeli and international law. They will, of course, remain illegal under international law. He has transferred the Border Police to Ben Gvir, thereby conferring on him a critical role in relation to the deteriorating status quo on the Noble Sanctuary/Temple Mount. Ben Gvir’s first act was one of provocation – touring the Al Aqsa Mosque compound to demonstrate Israeli control. The Prime Minister has moved the Coordination of Israeli Government Activities in the Territories (COGAT) and the Civil Administration to come under Smotrich. He has created a Ministerial post in his office to promote illegal settlements.

These policy decisions are designed to advance the separate, discriminatory and unequal system (designated by leading global and local human rights organisations, including Human Rights Watch, Amnesty International, B’Tselem and Al-Haq, as meeting the legal definition of Apartheid) in the  occupied Palestinian territory and expel Palestinians from their land. Irish Foreign Minister Simon Coveney rightly declared in May 2021 that settlements constitute annexation. These policy announcements entrench and expand annexation. They must be challenged by all those in Europe who uphold the Universal Declaration on Human Rights and strive for consistency in the application of international law.

Netanyahu’s annexationist and discriminatory intent is already clear, and should be opposed by all those concerned for Israel’s wellbeing and international standing. The impunity and lack of accountability accorded to Israel have empowered extremism and led us down to this abysmal low point. Insulating bilateral relations with Israel from Israel’s discriminatory and illegal policies against the Palestinians is not only a mistaken policy – worse, it undermines any European claim to uphold universal rights and values. This policy failure must be rectified.

We ask you specifically to

If the Israeli Government persists in its discriminatory policies towards the Palestinians, more areas of current bilateral cooperation with Israel should be re evaluated, leading to incremental and proportionate reduction in cooperation programmes.

Prime Minister Netanyahu is responsible for bringing the Religious Zionism Party into the Knesset and into his Government. Despite that fact, he will argue that he alone can exert a stabilising influence on Ben Gvir and Smotrich – and that any measures in response to acts of discrimination against Palestinians will weaken his influence. At the same time, on the evidence of his past record in office, he will threaten retaliation against any state taking such measures.

Successive Israeli Governments have acted with impunity – violating international law at will, building and expanding illegal settlements, and expelling occupied people from their land. This  Israeli Government has already shown that it will intensify these breaches of law. Consequences must follow.  The response to protests from Netanyahu and his coalition should be that we in Europe have not sought escalation: far from it. The responsibility for any deterioration in bilateral relations with Israel will lie with those who break the law to increase inequality and discrimination, thus destabilising the region, endangering security for us all, and seeking to eliminate the possibility of a just peace.

The European Union has taken a clear, principled position in support of the rules-based order concerning Russia’s invasion and partial annexation of Ukraine. The acquisition of territory by force is illegal, whether by Russia or by Israel. We ask you to uphold the law without fear or favour – that is the only way to maintain essential consistency in our conduct of international relations.

Signatories added after publication of the letter: 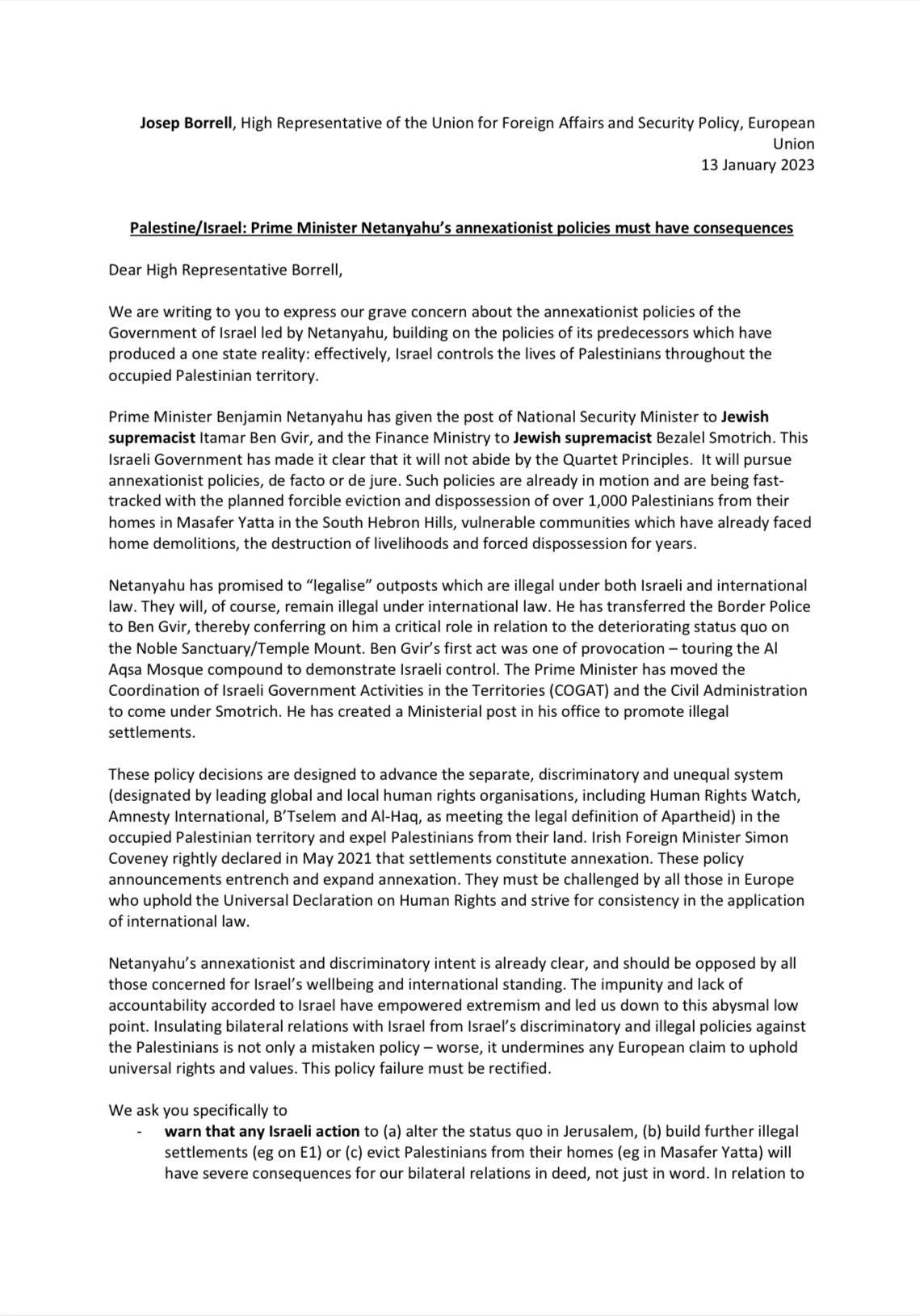 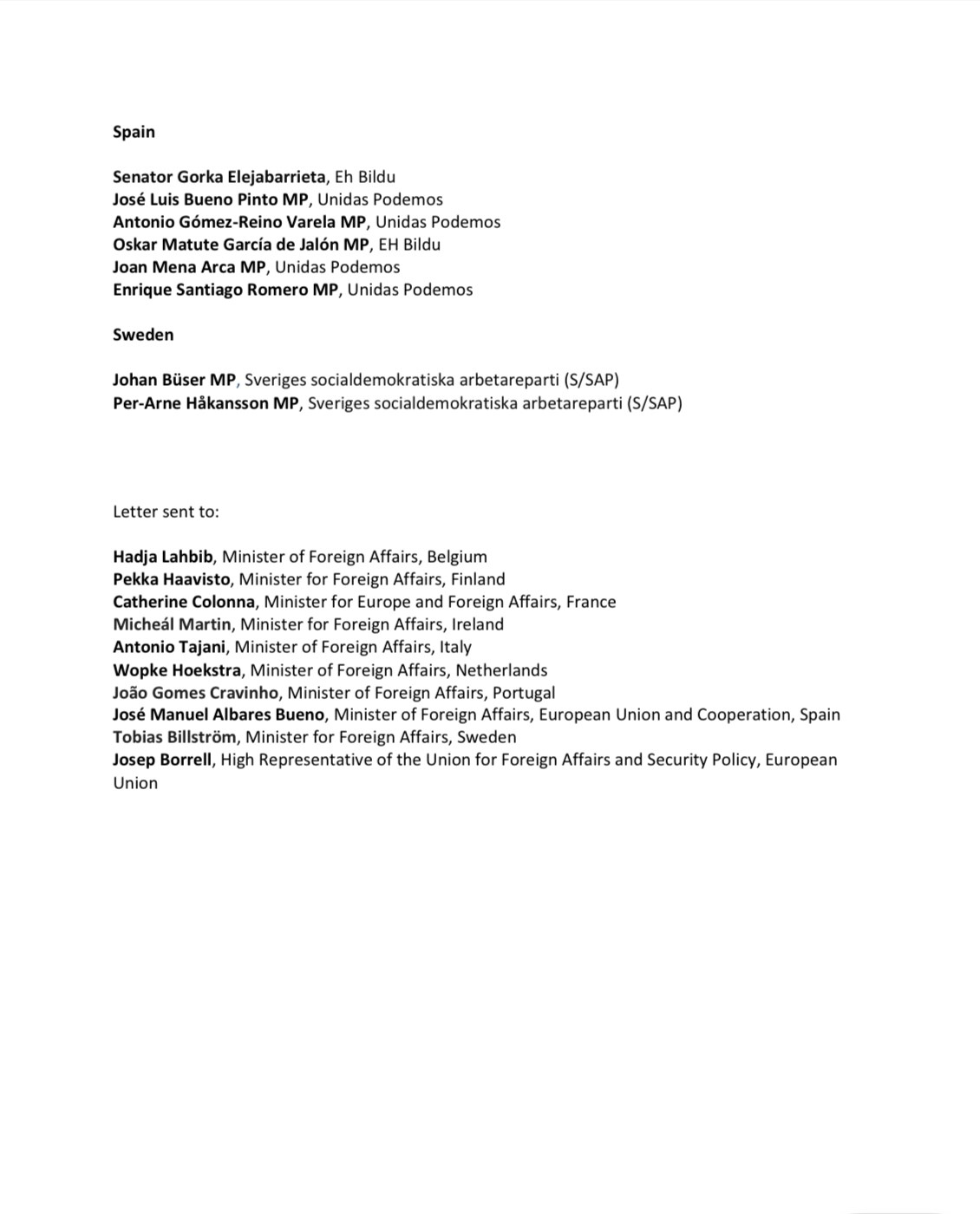