Caabu welcomes the letter from 37 former European leaders and foreign ministers on US policy and the Trump plan, which they argue would be one-sided against and detrimental to the Palestinians.

Coverage of the letter can be read in the Guardian and Haaretz. One of the signatories, Douglas Alexander, also spoke on BBC Radio 4's Today Programme about the letter, where he talks about standing by "a crushed and marginalised people" [the Palestinians], & against the "permanent annexation of Palestinian land" which US policy supports. You can listen here at 1:34.

We are reaching out at a critical point in time in the Middle East, as well as in Europe. The EU is heavily invested in the multilateral, rules-based international order. International law has brought us the longest period of peace, prosperity and stability our continent has ever enjoyed. For decades, we have worked to see our Israeli and Palestinian neighbours enjoy the peace dividends that we Europeans have through our commitment to that order.

In partnership with previous US administrations, Europe has promoted a just resolution to the Israeli-Palestinian conflict in the context of a two-state solution. To this date, despite subsequent setbacks, the Oslo agreement is still a milestone of transatlantic foreign policy cooperation.

Unfortunately, the current US administration has departed from longstanding US policy and distanced itself from established international legal norms. It has so far recognised only one side’s claims to Jerusalem and demonstrated a disturbing indifference to Israeli settlement expansion. The US has suspended funding for the UN agency for Palestinian refugees (UNRWA) and for other programmes benefitting Palestinians – gambling with the security and stability of various countries located at Europe’s doorstep.

Against this unfortunate absence of a clear-cut commitment to the vision of two states, the Trump administration has declared itself close to finalising and presenting a new plan for Israeli-Palestinian peace. Despite uncertainty as to if and when the plan will be released, it is crucial for Europe to be vigilant and act strategically.

We believe that Europe should embrace and promote a plan that respects the basic principles of international law as reflected in the agreed EU parameters for a resolution to the Israeli-Palestinian conflict. These parameters, which the EU has systematically reaffirmed during past US-sponsored talks, reflect our shared understanding that a viable peace requires the creation of a Palestinian state alongside Israel on borders based on the pre-1967 lines with mutually agreed, minimal and equal land swaps; with Jerusalem as the capital for both states; with security arrangements that address legitimate concerns and respect the sovereignty of each side and with an agreed, fair solution to the question of Palestine refugees.

Europe, by contrast, should reject any plan that does not meet this standard. While sharing Washington’s frustrations about the unsuccessful peace efforts of the past, we are convinced that a plan that reduces Palestinian statehood to an entity devoid of sovereignty, territorial contiguity and economic viability would severely compound the failure of previous peace-making efforts, accelerate the demise of the two-state option and fatally damage the cause of a durable peace for Palestinians and Israelis alike.

It is, of course, preferable for Europe to be working in tandem with the US to solve the Israeli-Palestinian conflict, as well as to address other global issues in a strong, transatlantic alliance. However, in situations in which our vital interests and fundamental values are at stake, Europe must pursue its own course of action.

In anticipation of this US plan, we believe Europe should formally reaffirm the internationally agreed parameters for a two-state solution. Doing this in advance of the US plan establishes the EU’s criteria for supporting American efforts and facilitates a coherent and unified European response once the plan is published.

European governments should further commit to scale up efforts to protect the viability of a future two-state outcome. It is of the utmost importance that the EU and all member states actively ensure the implementation of relevant UN security council resolutions – including consistent differentiation in accordance with UN security council resolution 2334, between Israel in its recognised and legitimate borders, and its illegal settlements in the occupied territories.

Furthermore, recent escalating efforts to restrict the unhindered work of civil society have made European support for human-rights defenders in both Israel and Palestine, and their critical role in reaching a sustainable peace, more important than ever.

Israel and the occupied Palestinian Territories are sliding into a one-state reality of unequal rights. This cannot continue. For the Israelis, for the Palestinians or for us in Europe.

Right now, Europe is facing a defining opportunity to reinforce our shared principles and long-held commitments in relation to the Middle East peace process and thereby manifest Europe’s unique role as a point of reference for a rules-based global order.

Failing to seize this opportunity, at a point in time when this order is unprecedentedly challenged, would have far-reaching negative consequences. 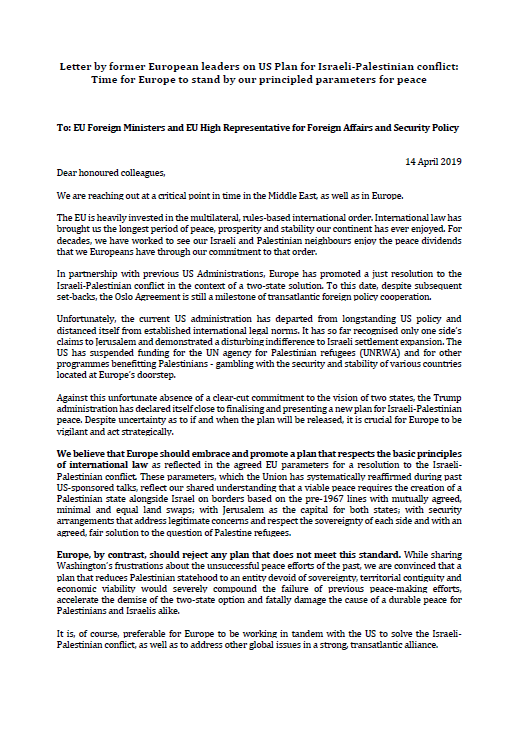 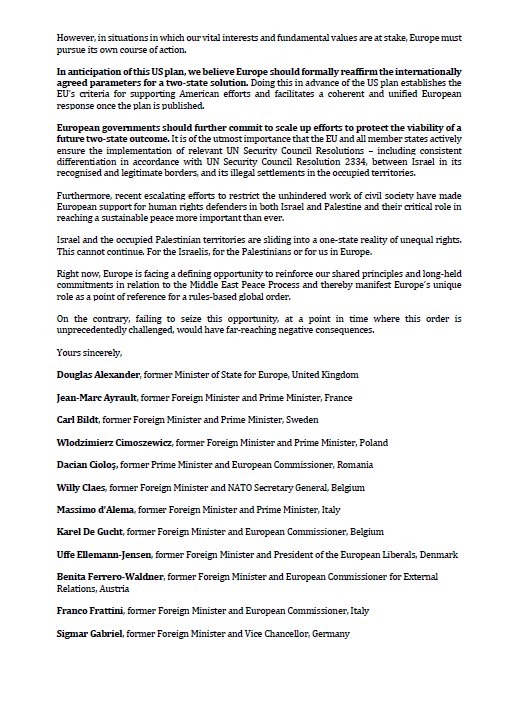 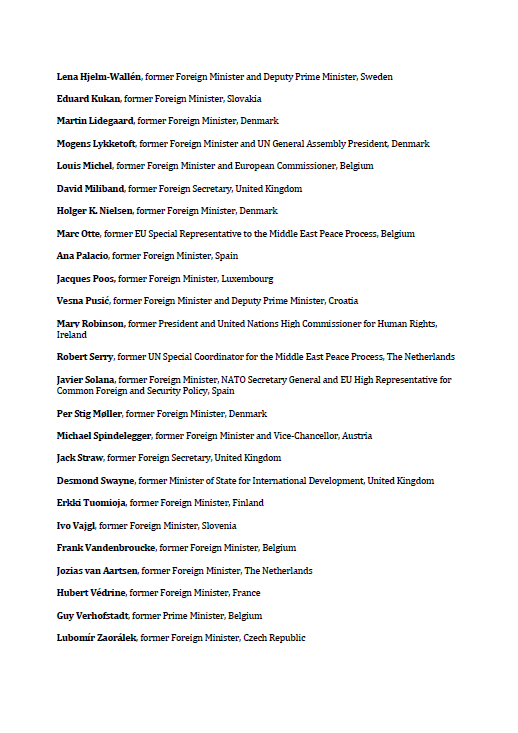