Caabu Parliamentary delegation to the occupied Palestinian territory, May 2022

Caabu Parliamentary delegation to the occupied Palestinian territory, May 2022

During the course of the delegation, many meetings were held, including with the British Consulate, the Palestinian Authority, the Israeli Ministry of Foreign Affairs, with Israeli MKs, the UN, and with both Palestinian and Israeli civil society, and international human rights organisations. The delegation also met with the family of Shireen Abu Akleh, at the home of the murdered Palestinian-American journalist, and heard from her brother, Anton Abu-Akleh, who called for the MPs to do more and urge the Government and others to call for an independent inquiry into her murder in Jenin refugee camp.

Some of the themes covered on the delegation included Jerusalem, the forced dispossessions and displacements of families from Sheikh Jarrah and Silwan, and the issues faced by Palestinians living in the Old City of Jerusalem. They also visited the Makassed Hospital in occupied East Jerusalem, discussing Israel's devastating permit regime In occupied East Jerusalem, but also elsewhere across the West Bank, the delegation paid a great deal of attention to settlement expansion, settler impunity and settler violence, not least in the Palestinian villages of Beita and Burin near to Nablus. Here the number of settler attacks on Palestinian homes, farmers and those living there, backed by Israeli occupation forces, have been on the increase. In Beita, the delegation met with the Palestine Red Crescent Society who have been treating those injured and shot at with live ammunition by Israeli forces, particularly during weekly protests. The delegation also visited a community in the E1 area in Area C of the occupied West Bank, served by Medical Aid for Palestinian's mobile clinic, threatened by demolition and forcible transfer as part of the E1 settlement plan. Palestinians here also face settler intimidation f from the nearby settlement.

Child detention and the trial of Palestinian minors in Israeli military courts were also raised at length during the delegation. The MPs visited the military court at Ofer, and witnessed the trial of a 14 year old boy (with consent from his parents in attendance for his trial). He had been arrested on suspicion of throwing stones. As he was running away from Israeli soldiers, he had been shot in the leg, and an interrogation where had had also been beaten (without any adult present), followed after he was discharged from hospital. The delegation also met with two former child detainees, both now aged 18, who spoke of their experiences of military detention, from arrest to trial.

With UNRWA, the delegates also discussed the issue of Palestine refugees. This included a visit to the village of Al Walaja in Area C of the occupied West Bank, near to Bethlehem. The majority of residents are refugees since 1948 from the original village of Al Walaja 2km away over the 'Green Line'. The village today faces numerous demolition orders, with adequate urban planning refused by Israeli authorities.  Access to it is severely restricted, not least by the annexation wall.

Also with UNRWA, the delegation visited Arroub refugee camp, between Bethlehem and Hebron. They heard about the experiences of Palestine refugees in the camp, including the issue of child detention, and the use of live ammunition. The MPs asked questions of and took questions from the school parliament at a boy's school, one of Arroub's four UNRWA schools, including hearing about how students were working with each other to avoid as best as they can, Israeli military detention, and worse  They were also briefed on the difficulties faced by UNRWA.

The delegation also visited Hebron, and walked through the city's Shuhada Street and its "sterilised zones", where Palestinians are not allowed. They also discussed the gendered impact of occupation on women in the area of Tel Rumeida, and heard the stories of women adversely affected, including on violence from Israeli settlers and IDF soldiers in Hebron, and issues of access, checkpoints and isolation.

The delegation has already been busy writing and speaking about their experiences.  Bambos wrote this in the Labour List about his experience. Anna spoke to BBC Wales here and also to Times Radio here.  Below is an article she wrote for Wales online. 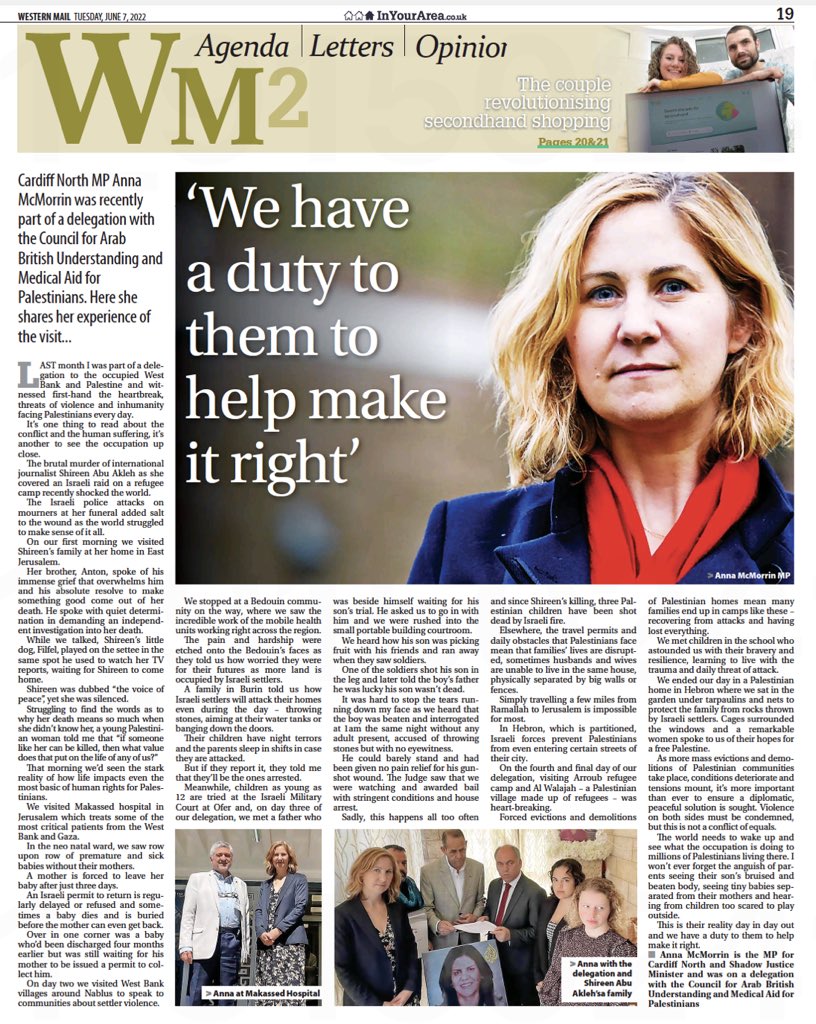