A Caabu and Medical Aid for Palestinians (MAP) Parliamentary delegation have just returned from the West Bank. The delegation from 13-17 February included Scottish National Party (SNP) MPs Margaret Ferrier and Tommy Sheppard and Liberal Democrat Member of the House of Lords and Shadow Secretary of State for International Development, Baroness Sheehan. The delegation had meetings with both Palestinian and Israeli officials, the British Consulate in Jerusalem, the British Embassy in Tel Aviv and was briefed on the current situation in the West Bank and Gaza by the UN. 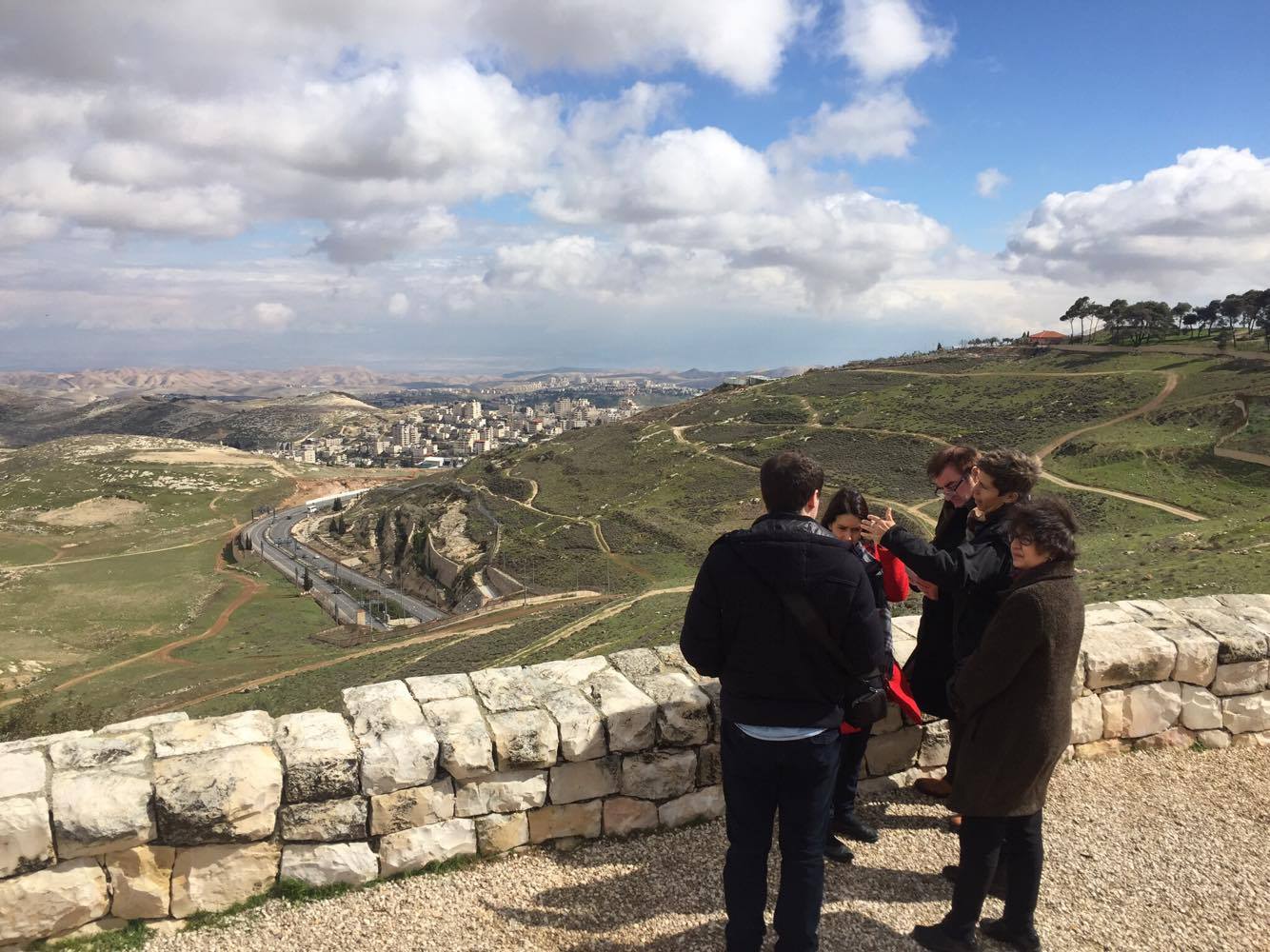 Meetings were also had with Military Court Watch about Palestinian child detentions, Adalah, Addameer, Bimkom, Public Committee Against Tourture in Israel (PCATI) local NGOs Adalah and Save the Children.

The delegation were briefed by both staff at the Makassed Hospital in East Jerusalem and by Physicians for Human Rights – Israel (PHRI). Jointly, Medical Aid for Palestinians and PHRI have published a recent report on how Israel’s occupation affects the health and dignity of Palestinians. Discussions at the hospital included barriers to healthcare, including the bureaucratic control of movement imposed by Israel’s permit regime, and physical barriers of the network of checkpoints which control access into and out of Gaza, the west Bank and East Jerusalem. Much of PHRI’s focus is on patients from Gaza and on those patients whose permits are denied.

The team at Makassed briefed the delegation on a raid by Israeli police on the hospital in October 2015. The delegation were given the tour of the hospital, and one of the patients they met was 7 month old Maryam from Gaza. On 20 February 2017, after over 6 months, Maryam was reunited with her mother Jumana Daoud, who was finally granted a permit by Israeli authorities to come from Gaza. It was the first time that Jumana was able to pick up her daughter after being prematurely born on 1 August 2016. An application for Jumana to travel from Gaza to Jerusalem had been submitted several months ago in order to retrieve Maryam, something which Israeli authorities deny. 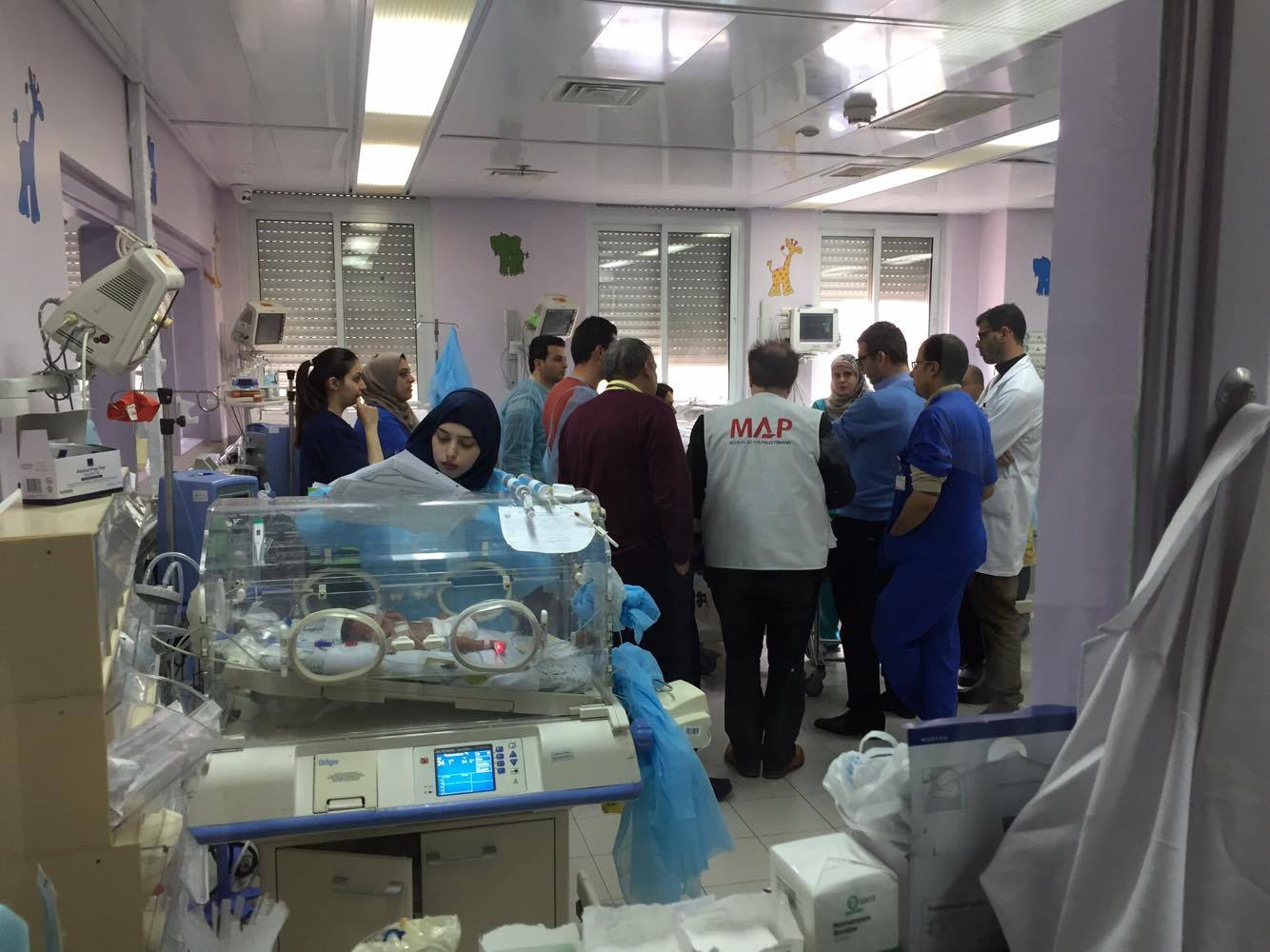 In Aida refugee camp in Bethlehem, the delegation visited the Lajee Center, established in 2000 by a group of eleven young people from the camp. The main aim of the Lajee Center is to provide refugee youth with cultural, educational, social and developmental opportunities. The Center finds itself under frequent raids from Israeli soldiers, with Aida Camp serving effectively as a training ground for soldiers given the inevitable clashes between young Palestinians. Prior to the delegation’s visit, Lajee was raided by Israeli soldiers on 7 February 2017 – the second time Israeli soldiers entered it in three days – and seized two computers. In Aida Camp, frequently Palestinian minors are arrested by Israeli soldiers. On Monday 13 February, two brothers aged 12 and 13 were arrested, and video footage from 8 February 2017 shows another 12 year old boy being arrested and forced into an army vehicle.

The delegation were briefed on the situation for refugees in Aida Camp, and the overall situation for Palestinian refugees by BADIL Resource Center for Palestinian Residency and Refugee Rights and Mohammed al-Azzeh who works for the Lajee Center but is also a journalist. In April 2013, al-Azzeh was shot in the face by a rubber bullet whilst taking photographs of Israeli soldiers entering the camp. The delegation was able to see the Wall that encircles much of Bethlehem, cutting it off from much of its land. 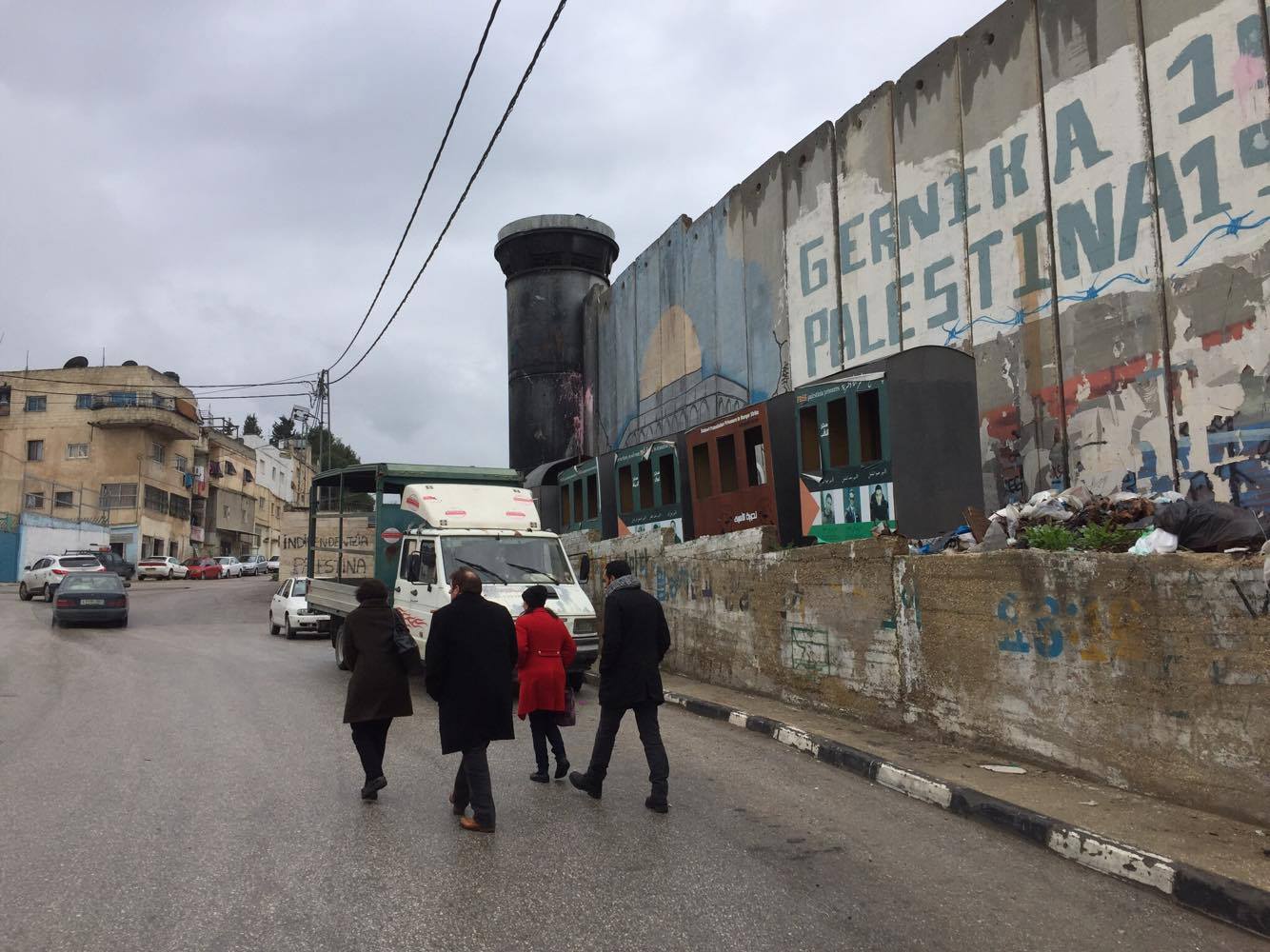 With Israeli human rights organisation B’Tselem, the delegation were taken to the Batan al-Hawa district of Silwan in Occupied East Jerusalem. Batan al-Hawa is the next major target for the “Judaization” of East Jerusalem, with 81 Palestinian families having eviction claims filed against them. According to the UN, this number of Palestinian families threatened with demolition reflects a third of East Jerusalem’s families under threat from dispossession on the basis of ethnicity.  Palestinians in Batan al-Hawa have been facing a series of state-backed evictions by settler organisations. Since illegal Israeli settlers have been moved into the area, frictions have increased, given that the settlers are protected, escorted and accompanied by Israeli police and private security guards. During the delegation’s visit, they witnessed a settler being accompanied out in a vehicle by private security guards from the house settlers had taken over in the heart of Batan al-Hawa. The B’Tselem volunteer who accompanied us described how this particular settler man had hit his young daughter. B’Tselem spokesperson Amit Gulitz has this article about Batan al-Hawa in 972 Magazine.

The delegation were also shown the impact of the Wall in other areas of Occupied East Jerusalem, and were taken to the viewpoint at Mount Scopus to see the strategic settlement project of E1 that would effectively sever Jerusalem from the West Bank as well as dividing the West Bank in two, a project that would seal the fate of the two-state solution. It is in this area that one of the largest of Israel’s illegal settlements lies, Ma’ale Adumim. 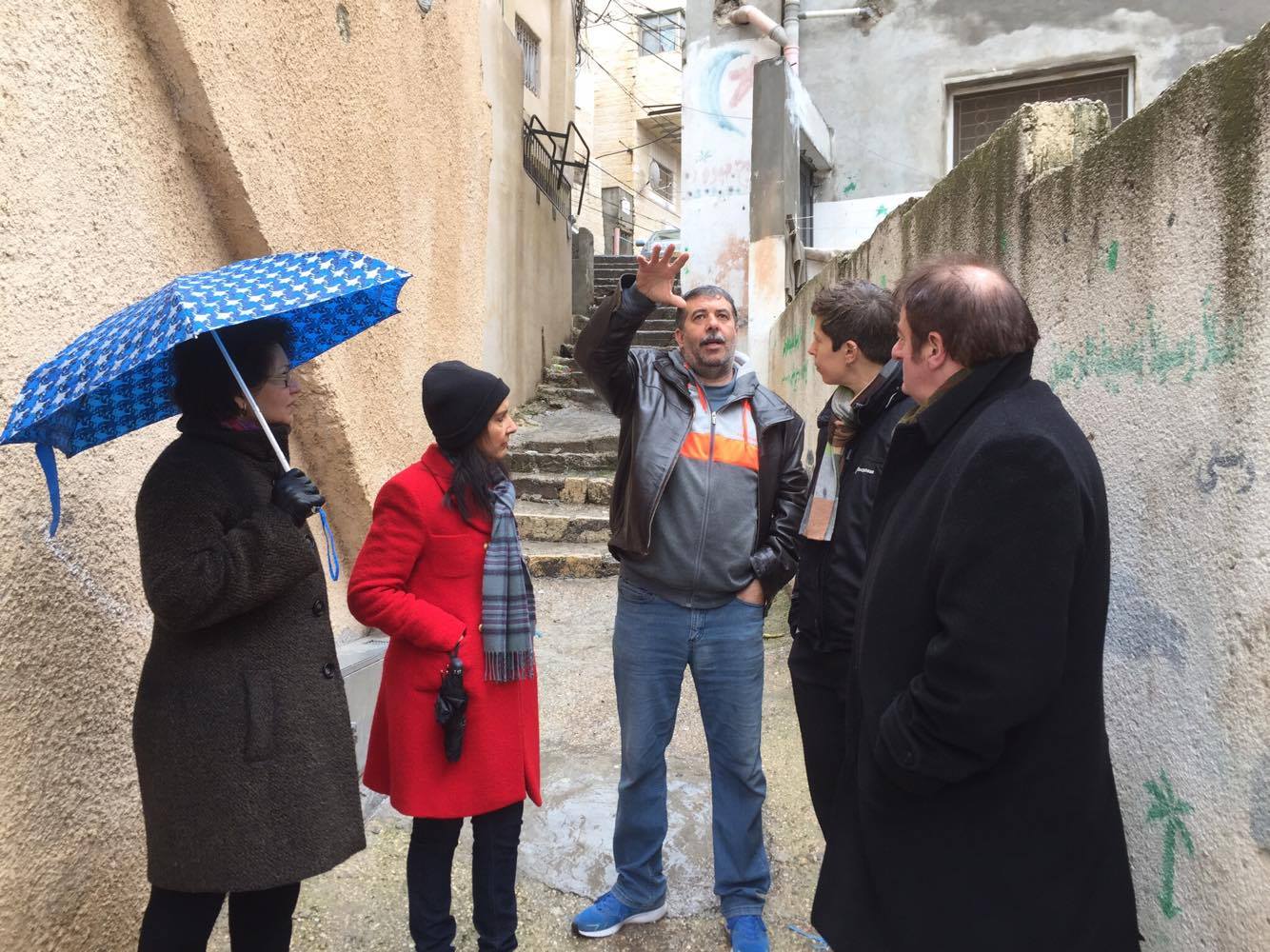 The delegation went to visit livelihood projects supported by Oxfam in the Occupied Palestinian territories. They visited the olive oil Cooperative of East Bani Zaid near Ramallah and Salfit. It was established in 2005 by a group of five farmers from the villages of Arura and Mazari an Nubani. 32 oliver farmers are part of the cooperative. Farmers and other members of the cooperative discussed issues of access to land and settler violence, particularly during the harvest, that many farmers face. 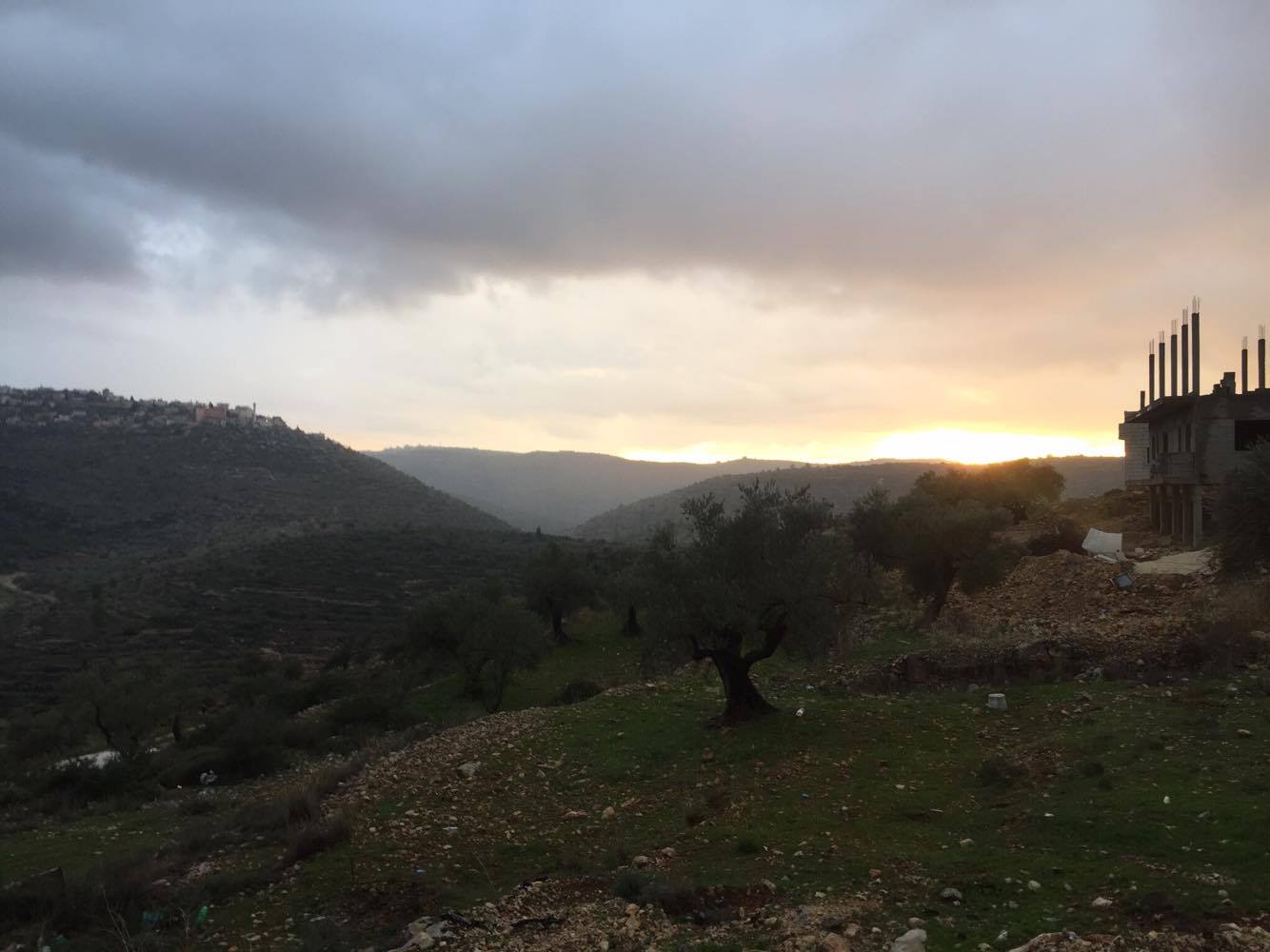 The Tent of Nations

Situated in the middle of the Gush Etzion settlement block near the Palestinian village of Nahhalin, is the educational and environmental farm of the Tent of Nations, owned by the Nasser family. The delegation visited the Tent of Nations, which is surrounded by many illegal Israeli settlements, including Neve Daniel and Beitar Illit. It is in Area C of the West Bank, under full Israeli military control. The access road to the Tent of Nations has been blocked, making access to it more difficult. The land was purchased by the Nasser family in 1916, but in 1991 was declared ‘state land’ by Israel, and the family has been fighting court battles ever since.

The separation barrier is planned between Bethlehem and the Tent of Nations. If this happens, the farm will be separated from Bethlehem. Moreover, in July 2015, the Israeli Authorities approved the construction of a religious school (yeshiva) near the access road to Tent of Nations, close to Neve Daniel, one of the neighbouring settlements. The construction work has started, and there is a big concern that the access road might be closed soon ‘for security reasons’, which will have a huge impact on the accessibility of the farm. 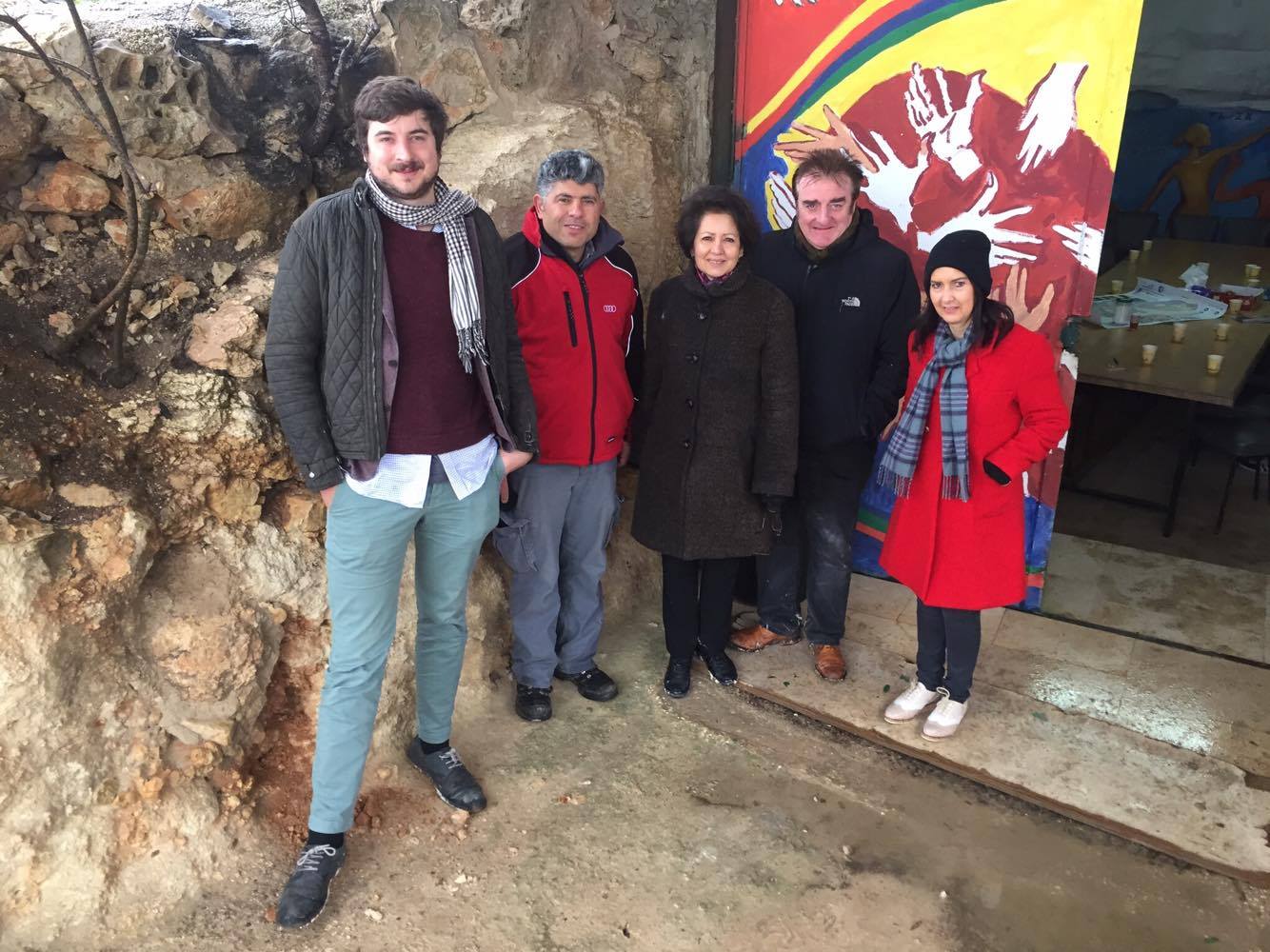 The delegation also visited the historic centre of the city of Hebron with Israeli organisation, Breaking the Silence. They took a tour along the city’s Shuhada Street which is under full Israeli military control, with various checkpoints that Palestinians have to go through. While the whole area of H2 in Hebron is free for settlers to walk and drive in, it remains restricted for Palestinians. Palestinians are unable to drive in large sections of H2, and areas of Shuhada street remain completely closed for pedestrians, cars and shops.

Both Breaking the Silence and B’Tselem detailed the continuous attacks on Israeli civil society and Israeli organisations that call for an end to the Occupation by the Israeli Government and elements of the Israeli right. 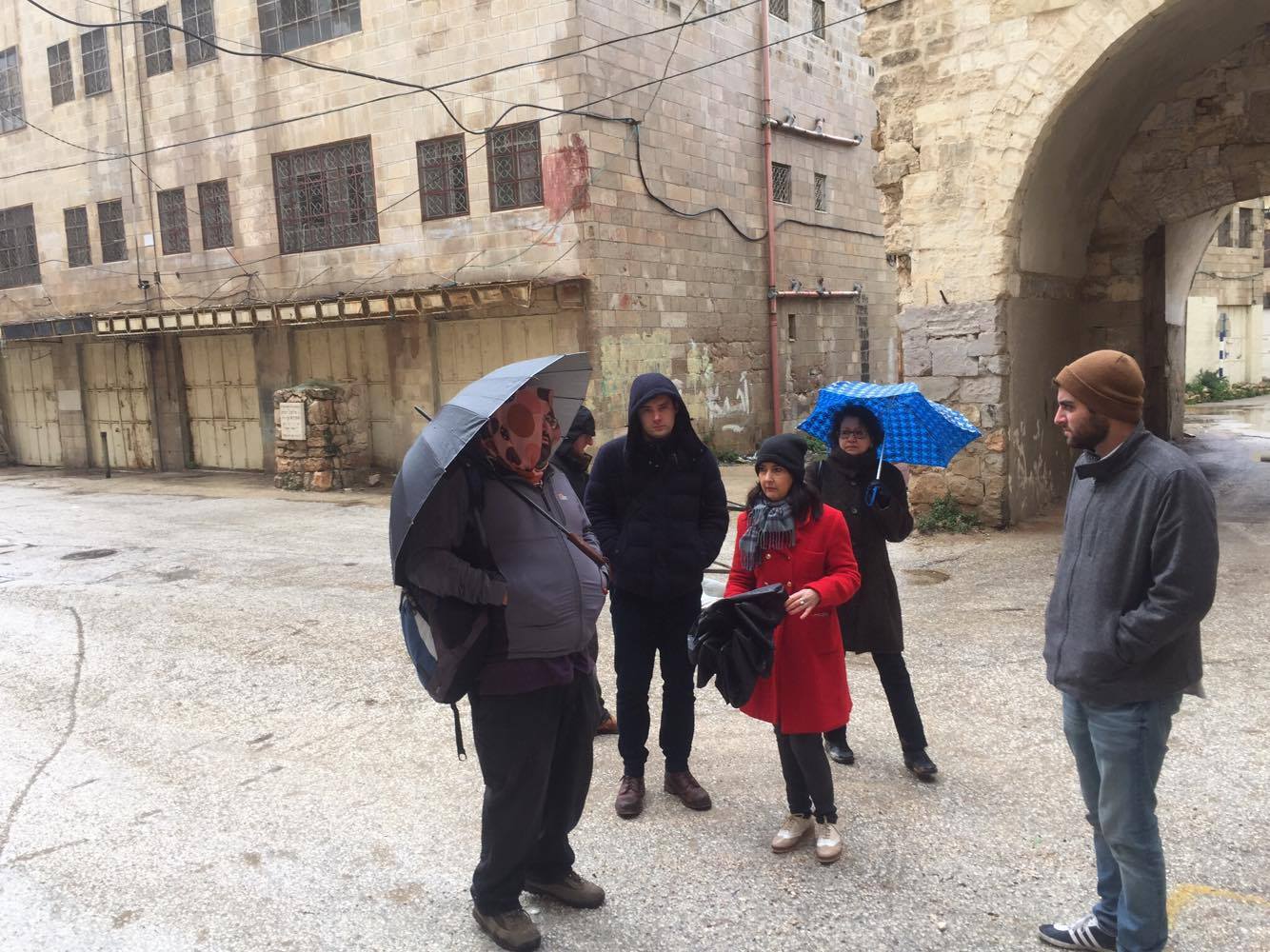 You can also read Tommy Sheppard's article about the trip here.