A Caabu and Human Appeal Parliamentary delegation has recently returned from the West Bank. The delegation from 6-10 October included Conservative MP Flick Drummond, Liberal Democrat MP Mark Williams and Scottish National Party (SNP) MP Joanna Cherry QC. The delegation met with the Palestinian PM, Dr Rami Hamdallah and Israeli Member of the Knesset, Yossi Yona MK. They also were briefed by the British Consul General in Jerusalem Dr Alastair McPhail, and on the current situation in the West Bank and Gaza by the UN.

Meetings were also had with B'Tselem, Diakonia, Oxfam and Save the Children.

The delegation visited Susiya in the South Hebron Hills, an area under exclusive Israeli control, with Israeli NGO Breaking the Silence. They also visited other communities in the South Hebron Hills under threat of demolition, including Umm al Kheir where there have been numerous demolitions. Next to the Palestinian village of Susiya is the illegal Israeli settlement of Susya, while Umm al Kheir is next to the illegal Israeli settlement of Carmel. Both illegal settlements enjoy full access to water and electricity whilst the Palestinian villages next door do not. They were briefed with the community in Susiya who spoke of their struggle to save the village, which currently has demolition orders on all buildings. Susiya is the highest profile case of villages under threat in the South Hebron Hills, and in Area C more widely – and with international support, the community has led in the fight against Palestinian home demolitions. 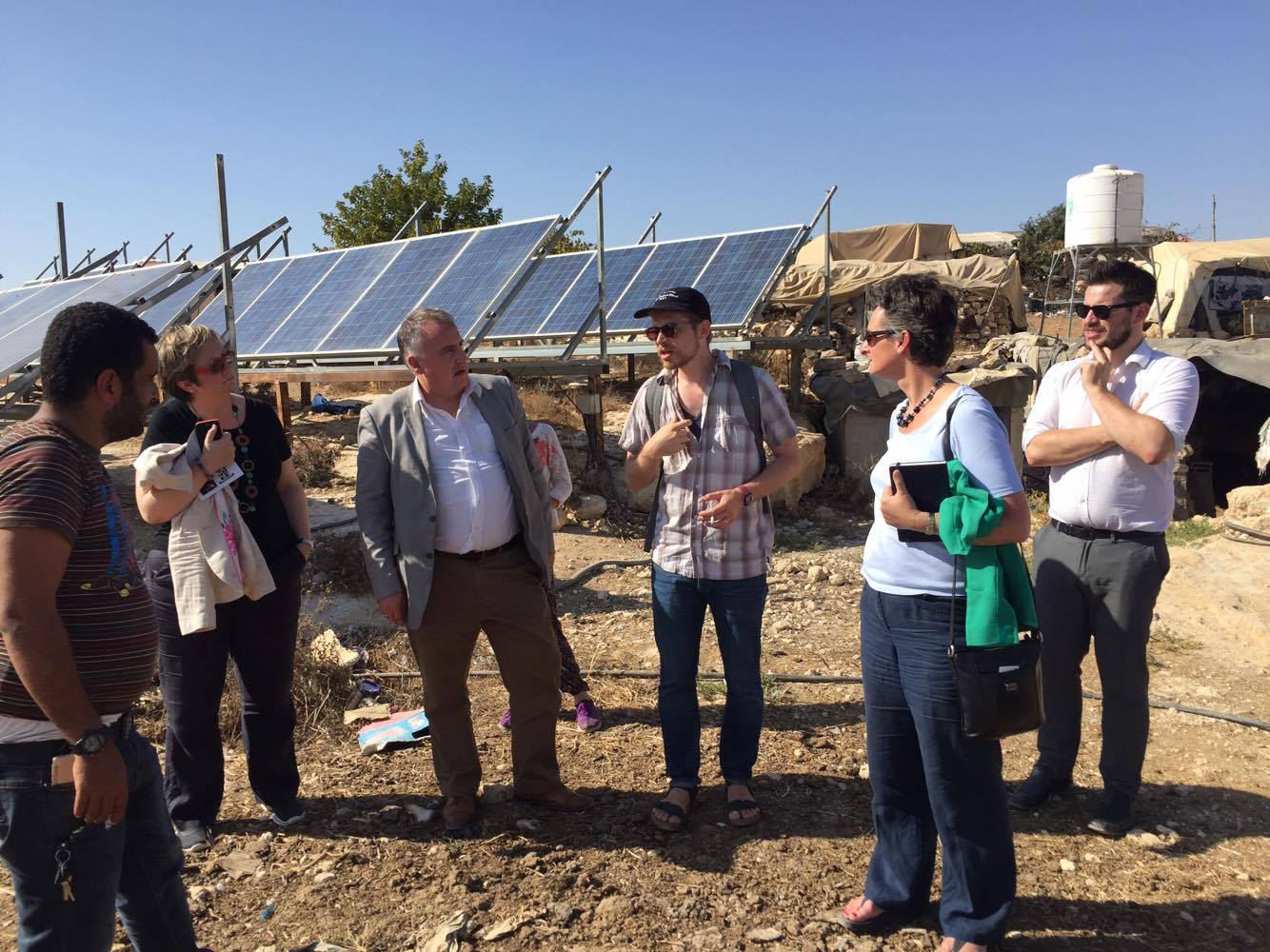 Also with Breaking the Silence, the delegation visited the city of Hebron and were given a tour down the once thriving Shuhada Street, the central artery through the Old City of Hebron. Now, the majority of the shops are shut (many welded shut by the Israeli military), the area heavily restricted to Palestinians with numerous checkpoints. Much of the Old City of Hebron has been rendered ‘sterilised’ by the Israeli military. The whole of Shuhada Street through the Old City is inaccessible to Palestinian vehicles, and pedestrian access is restricted on most of the street. The delegation saw Palestinian homes which are inaccessible from their front doors. All these areas are accessible to the illegal settlers of Hebron’s illegal settlements. Hebron and Jerusalem are the only Palestinian cities with settlements in the heart of them. In Hebron, the delegation saw the illegal settlements of Avraham Avinu, Beit Romano, Beit Hadassah and Tel Rumeida – and Kiryat Arba on the edge of the city. Whilst on Shuhada Street, a settler from Tel Rumeida intimidated the delegation by filming them. 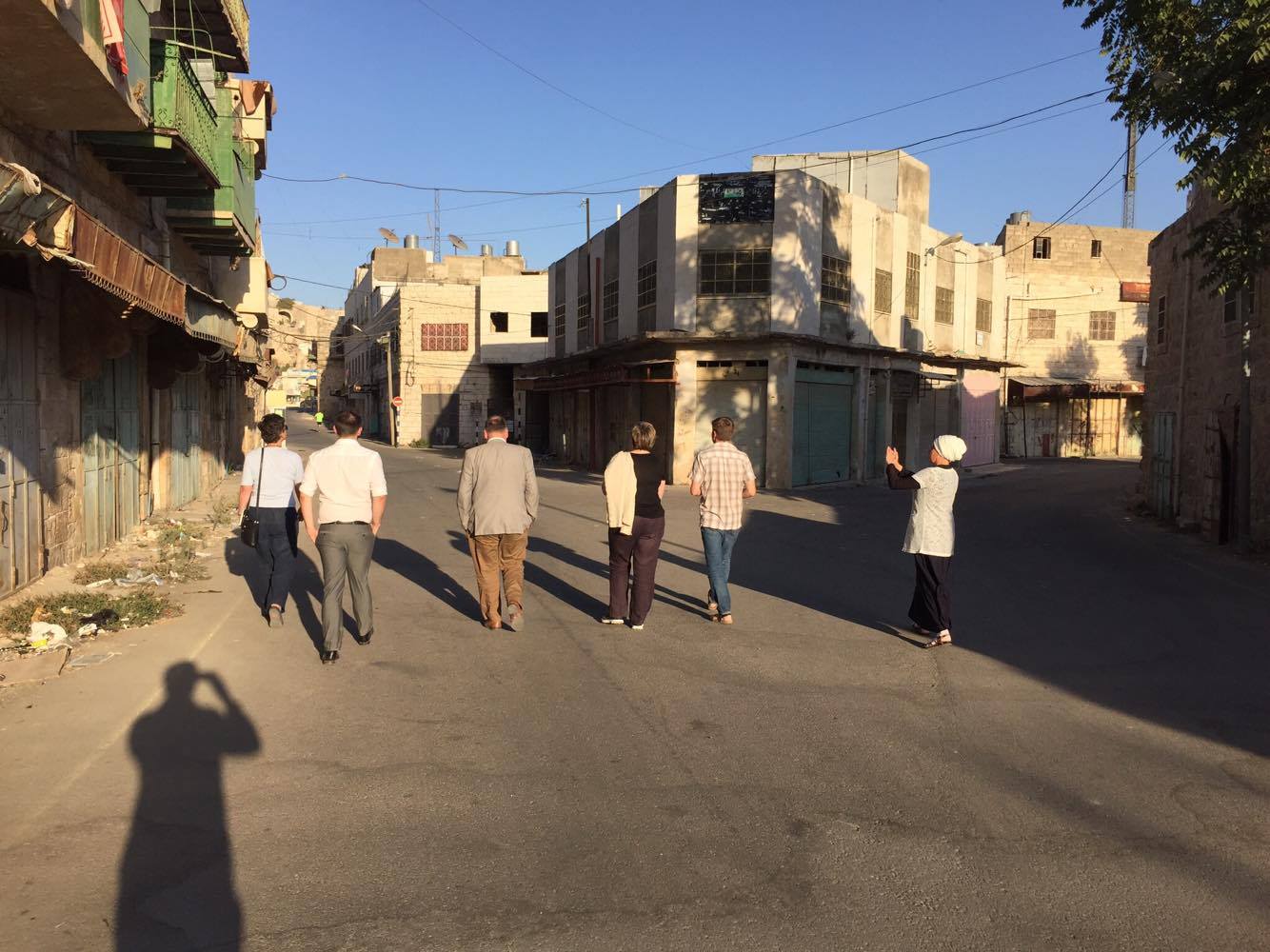 In the Tel Rumeida area of Hebron, the delegation met with Issa Amro, the founder of Youth Against Settlements, a non violent direct action group, which seeks to end the building and expanding of illegal Israeli settlements through non-violent popular struggle and civil resistance.

Olive harvest in Sanur and Canaan Fair Trade in Burqin 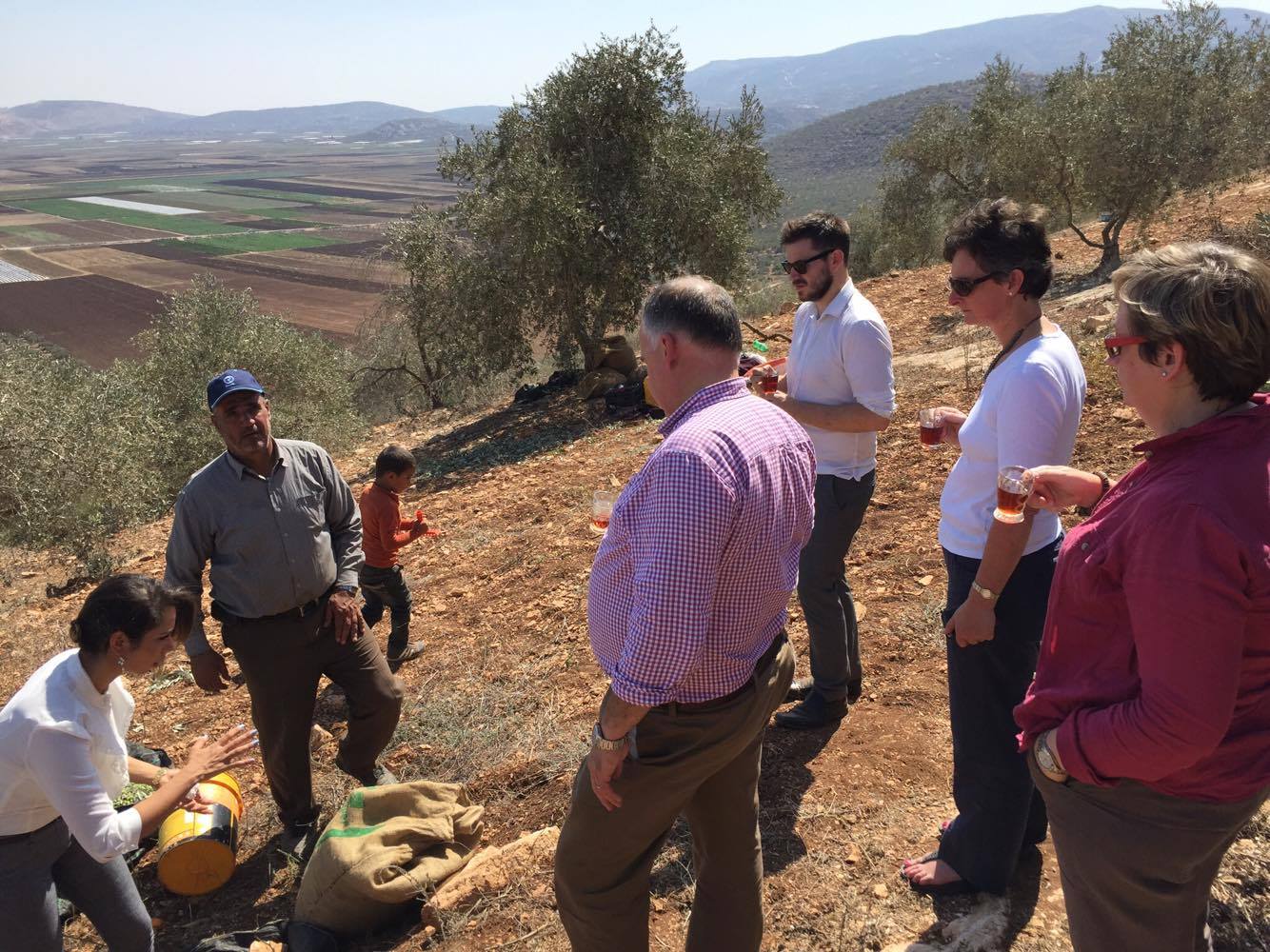 The delegation visited Canaan Fair Trade in Burqin, close to Jenin which sells fair-trade olive oil and other products such as almonds, za’atar, freekeh and maftoul produced by over  1,700 small scale Palestinian farmers. Farmers are incentivised to produce high quality produce, and by selling them to Canaan Fair Trade they earn more than they would through other means. If the farmers meet the standards set, Canaan have to buy all of their produce. The olive oil produced by these small scale Palestinian farmers is sold in the UK through Zaytoun, one of Caabu’s fellow resident organisations at the Arab British Centre.

In the village of Sanur, the delegation were given the opportunity to take part and see the olive harvest with farmer Haj Bashir and several of his 38 grandchildren. Haj Bashir plants and harvests 80 dunums in 9 different lots in his village. Working under the Hussa or crop sharing system, Haj Bashir tends to lands that belong to people who no longer live in the village or have left the country. In exchange for his work he gets to keep a large percentage of the oil he produces or keep it all and pay the landowners their share in cash. Among his multi-crop fields, one can find anise, sesame, chickpeas, wheat, and of course, olives. 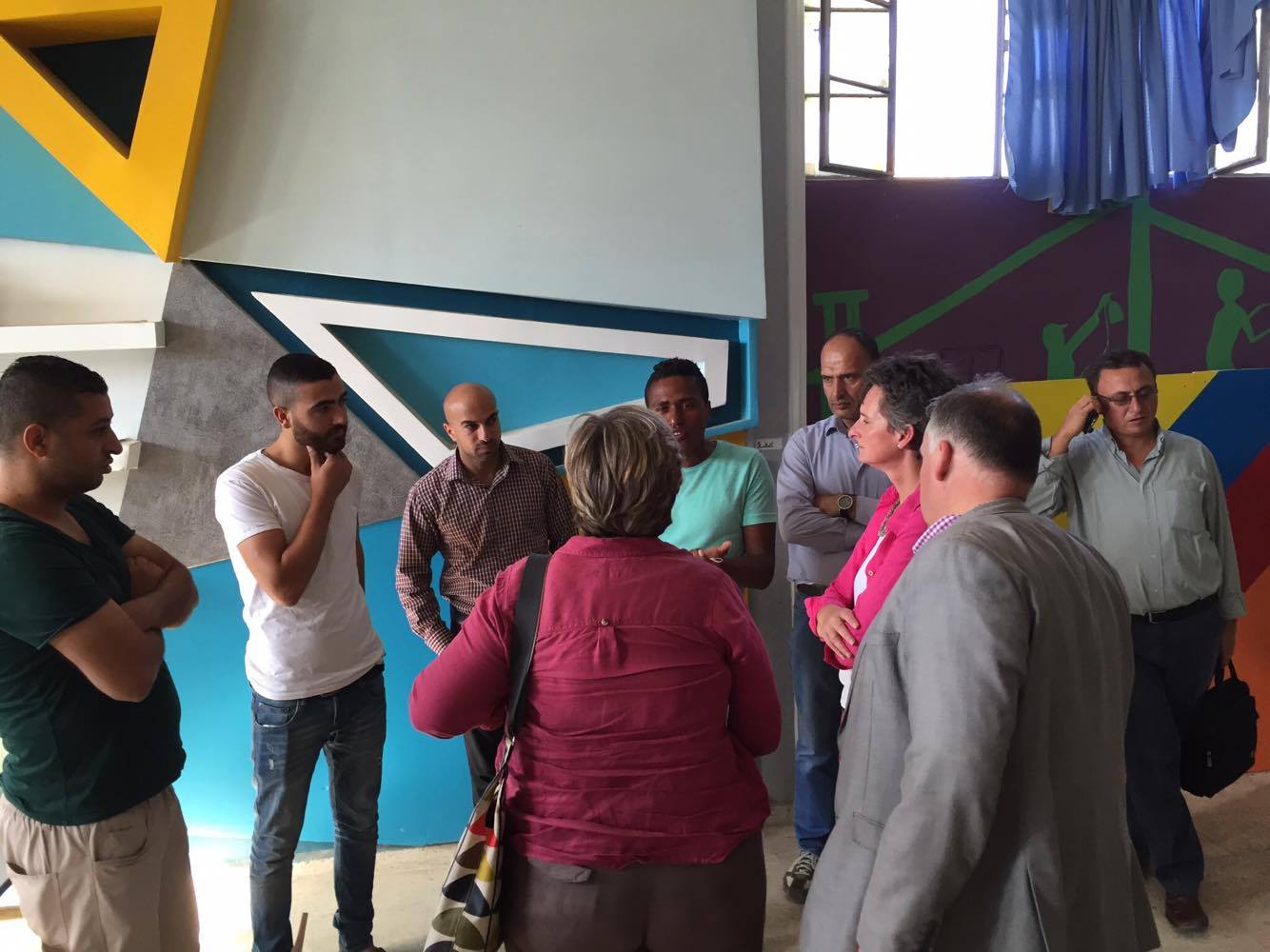 The Parliamentary delegation went to see some of Human Appeal’s projects in the Jenin area. In Jenin Refugee Camp, the delegation visited a women’s centre supported by Human Appeal which has various projects that encourage women in the community to be more economically self sustainable, including through making and selling food, making and selling craft, and offering various training activities. In Jenin, Human Appeal also support a Vocational Training Centre, and the delegation met young people who were benefiting from vocational training such as decorating and plastering. Other projects that Human Appeal operates in the Jenin area include a medical centre.

Between Jenin and Nablus, the delegation visited a sewage facility and waste water treatment plant in order to make waste water an asset in order to increase agricultural production and introduce irrigation from non conventional water sources. 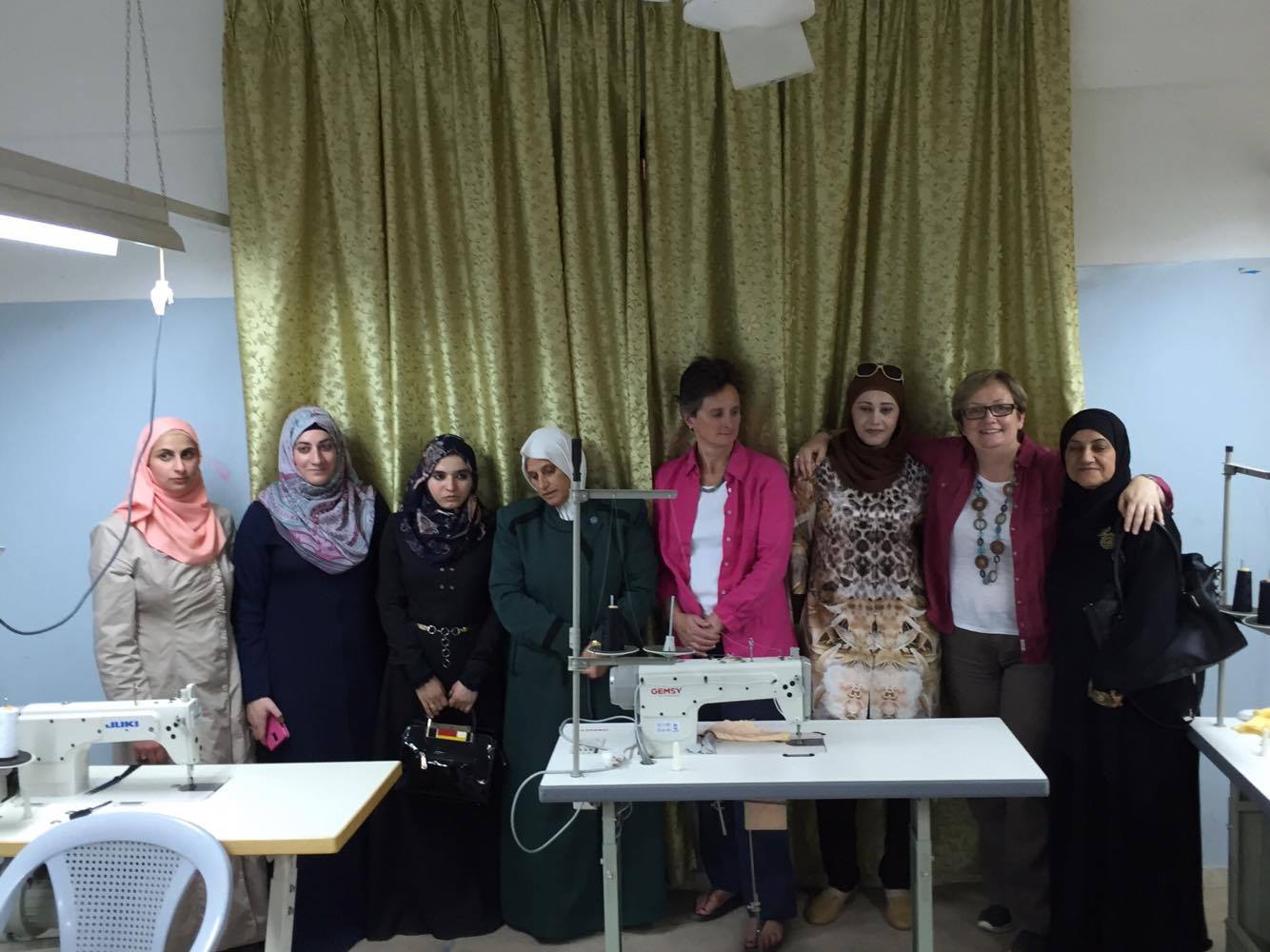 In Duma, the delegation met with members of the Dawabshe family, and visited the house of Ali Dawabshe and his parents who were murdered in a settler arson attack in July 2015. The only survivor of the attack was Ahmed Dawabshe who was five years old at the time. Ahmed remained in hospital until July 2016, and still has to return to hospital twice a week.

Visit to the Military Court at Ofer

With Military Court Watch, the delegation were able to witness several trials at Ofer. Caabu continues to focus on the issue of Palestinian child detainees, and at Ofer saw trials of minors in the Israeli military court system, and spoke with families who were there waiting for the trial. As ever, Palestinians met their lawyers for the first time in court and had been through what can only be described as a farcical legal process.

According to the most recent Israeli Prisons Services data, 414 children (12-17 years) were held in military detention at the end of April 2016. This represents a 91 per cent increase compared with the monthly average for 2015. The latest data includes 12 girls; three children under 14 years; and 13 children held without charge or trial in administrative detention. The age and gender breakdown for children held in detention in April 2016 was as follows:

The Military Court is not just for trials of minors. The delegation witnessed one trial for a young Palestinian man in his early 20s for allegedly throwing stones at a settler car. The man’s interrogator, who the defendant claimed had assaulted him during interrogation, was in the court as a witness – his gun visibly showing in his back pocket. It was claimed that the interrogation was conducted in Arabic and that alongside the statement an audio recording was taken. However, the audio recording was nowhere to be found, and the level of the interrogator’s Arabic was revealed to be insufficient to be able to obtain and record a fair and accurate statement. The only transcript was in Hebrew. In a fair trial, the case would certainly be thrown out. During the trial, the interrogator demonstrated his idea of what it was to read a detainee their legal rights by saying:

"Everything you say will be used against you in court"!

Impact of settlements and separation barrier

Palestinian NGO Al Haq gave the delegates a field trip to see the impact of settlements, the separation barrier and forced evictions on Palestinian communities. The delegates visited the Sabri-Ghrayeb family at Beit Ijza who are surrounded by the Givon Hahadasha settlement.

Al Haq also took the Parliamentarians to Bir Nabala, and the old entrance of the town now deserted because of the Annexation Wall (it was once a vibrant industrial area). In constrast to Bir Nabala, they saw the industrial settlement of Atarot, the other side of the Wall.

In the Old City of Jerusalem, the delegation also met Nora Gheith Sub-Laban and her family, who are surrounded by settlers and at risk of eviction, despite living there for over 60 years. There is a concerted campaign to forcible remove the Sub-Laban family from their home.

In February 2016, Caabu delegate (following the delegation) Imran Hussain asked the then Prime Minister David Cameron about occupied East Jerusalem and raised the case of the Sub-Laban family. 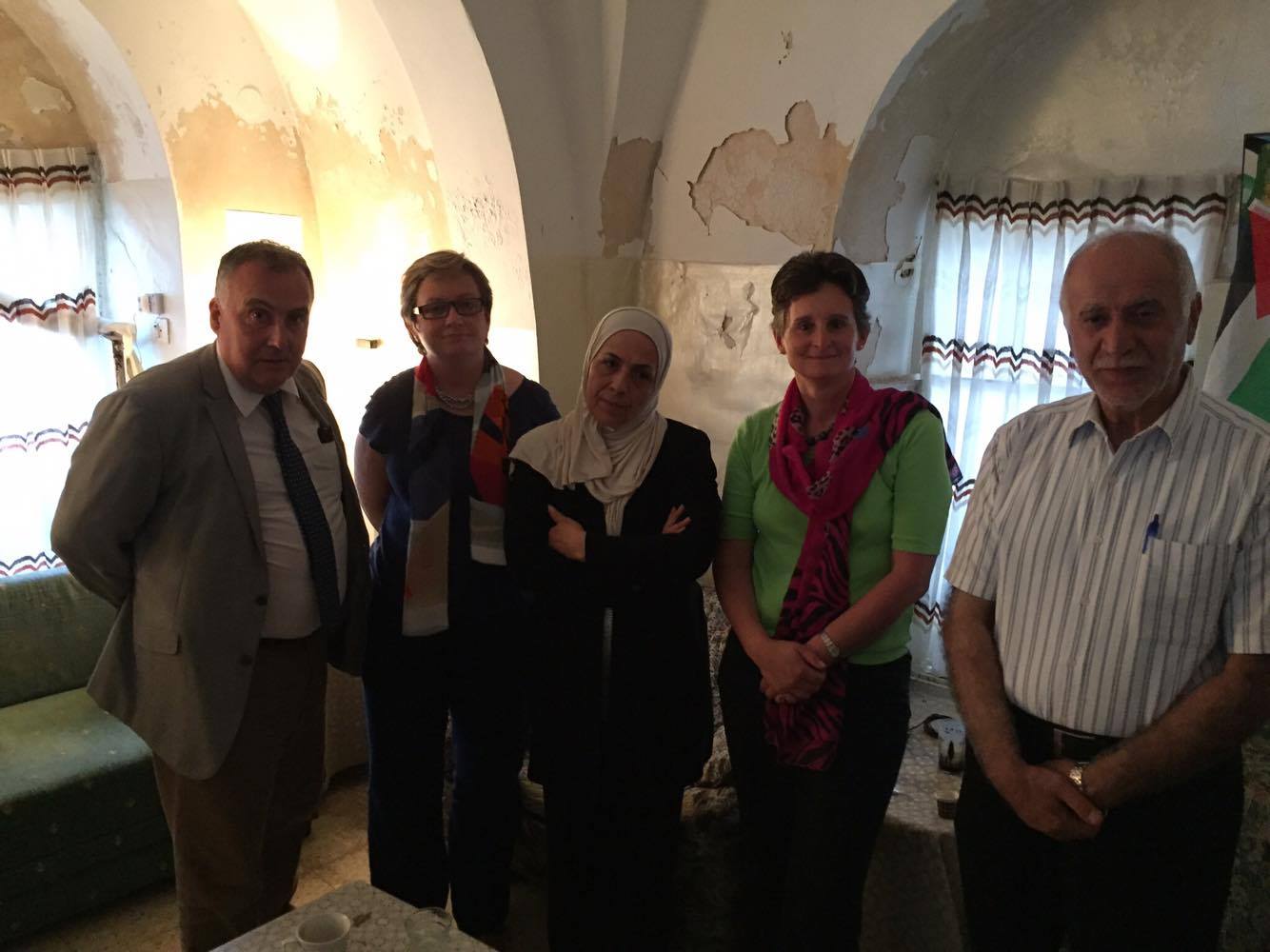