It's the occupation stupid

Since 14 July, the tensions in Jerusalem have been at breaking point. Israeli police and military have interrupted public prayers with tear gas and rubber bullets. Demonstrators have clashed with the police and several young Palestinians have been killed in the clashes. In the West Bank, three Israeli settlers were killed by a Palestinian militant. A surge in violence in Palestine/Israel tends to focus more media attention on a conflict that often goes ignored and unexamined when the violence and abuses are kept at a low hum, rather than a roar.

Over the last 50 years, a complex set of rules and practices has governed the holy site, the third holiest in Islam, which most Jews also regard as the site of the ancient temple. Changes in the status quo regarding who governs the site are a particularly sensitive issue to the Palestinians, and enhanced security is perceived to be an attack on the right of Muslims to enter the site freely to worship, as well as being a question of jurisdiction.

Extreme Jewish groups have attempted to pray inside the compound, in violation of agreements that have been in place for 50 years. Despite protestations to the contrary by the government, these attempts have often had the tacit support of Israeli troops and police, which has exacerbated Palestinian concerns over potential changes to the status quo. Israeli Prime Minister Netanyahu has also announced an end to the ban against Israeli politicians visiting the site. These visits have often been seen as a direct provocation, and in 2000, Ariel Sharon's visit triggered the second Intifada.

A quick examination of some of our media outlets shows that much of the context is lost in the immediacy of news reporting. In the Daily Mail, the single article dedicated to the volatile situation failed to mention that East Jerusalem is occupied. The Express managed to publish three articles, not one of which mentioned this crucial fact. Although the broadsheets did generally include a wider commentary on the events, both the Times and the Telegraph have failed to mention the occupation in articles about the recent tensions.

After the killing of three Israelis, the BBC published a story on their website. The headline implied that only three people had died, only if you read the whole piece would the Palestinian casualties of the current clashes be mentioned. Erasing one side of the conflict does nothing to further public understanding of what is happening in Palestine/Israel. 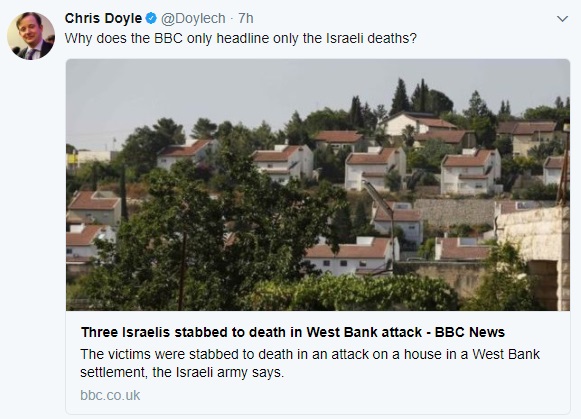 When newspapers and other media outlets ignore the context outside the most recent provocative action by one side or the other, the picture of what is actually happening in Jerusalem is obscured. At a meeting organised by Caabu, the Israeli lawyer Daniel Seidemann, gave an in-depth description of life under occupation and the steps that Israel's right-wing government has gone to in order to avoid its obligations under international law.  Seidemann emphasised the role that collective punishment plays in the experiences of Palestinians under occupation.

One thing more than any other defines life for Palestinians in Jerusalem, that is the occupation. A description of events that ignores this fact cannot begin to explain the tensions in the city.

Edmund Walton has worked for NGOs in Palestine and Greece. He is currently studying for a Masters in Middle Eastern studies at the University of Leiden.