“Today an orchestra. Tomorrow a country.” These were the words of the youngest member of the Palestine Youth Orchestra (PYO), aged just 14, summing up the hopes and dreams of the 85 talented young musicians who have just finished a hugely successful UK tour, organised by Palmusic.

Music is no ordinary matter in Palestine. Social, religious and political factors make performing and rehearsing nearly impossible. The orchestra is unable to rehearse together in Palestine due to travel restrictions, meaning they had just one week rehearsing together at the Royal Conservatoire of Scotland before their tour started. Back home musicians from Ramallah are often not permitted to travel to Jerusalem; Nazarenes are not let into Ramallah. In fact, two musicians from Gaza, who intended to play on the UK tour, were not allowed to leave Gaza by the Israeli authorities despite having permission from the Jordanian and British governments. For an orchestra, which relies on cohesion and teamwork, this poses a huge problem.

However, no obstacle seems too great for this orchestra to overcome. Under the baton of Sian Edwards, the orchestra has played at some of the greatest concert halls in the United Kingdom, such as the Glasgow Royal Concert Hall and The Royal Festival Hall, which yesterday hosted the tour’s finale. 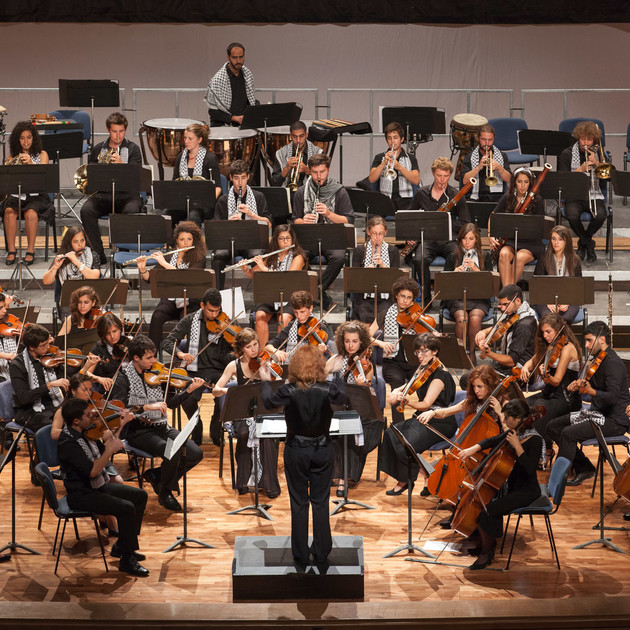 The choice of music throughout the night was constant in its brilliance, transporting the audience around the world and showing off the versatile skill and talent of the orchestra.

Beethoven’s Leonore Overture No. 3 opened the evening, an apt choice for an orchestra whose members are continually looking for freedom from the unjust oppression they face. The brilliant use of dynamics added to the drama of the overture. Florestan’s liberation, signalled by a hidden trumpet call from the boxes, had the whole audience searching for that freedom, while Nardin Ballan’s magical flute solo lifted the orchestra out into the joyous finale of Beethoven’s piece with such grace that one felt truly liberated.

We were taken from a Spanish political prison to the Middle East by the hypnotic vocalist Nai Barghouti, a rising star of Arabic music, with Ahtarif al huzna wal intizar (Grief and waiting are my profession). The song, written by the Rahbani brothers for the great Lebanese singer Fairuz, is part of a musical entitled ‘River of Return’ and tells of the encounter between a young Palestinian refugee of the 1967 six-day war and an old man, who enlists her help in filling his jar of water. Miss Barghouti’s voice hauntingly painted the notes of the lyrics which move from “the gates of tears” to the memories of a better life. This was complemented by the force of the orchestra in the piece’s despairing moments- an ominous beat of a prison march which the music etched in my mind.

The sense of nostalgia was continued with Ruddani ila Biladi (Take me back to my country), another piece by the Rahbani Brothers. This time, the orchestra conveyed an upbeat vision of a lost “country with the morning breeze”. A paradisiacal image of a home to return to; a home to which the singer is always faithful. The optimism of this song, with beautiful staccato notes from Miss Barghouti, and its hope for the future was perceptible in the nimble hands of the percussionists, accenting the piece at lightning speed. 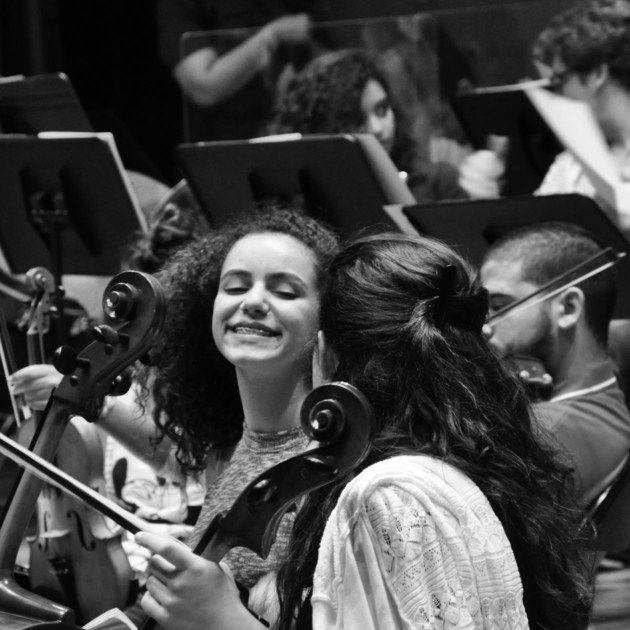 Bi Ridhak ya Khaliqi (With Your blessing, O my creator), the third of the Arabic songs performed, was a reminder of how much European music owes to Arabic music. A quartet of Miss Barghouti, the first violin Layth Sidiq, Mostafa Saad on the Oud and the cellist Naseem Atrash,  managed to transform the enormous festival hall into an intimate venue. I was taken back to a smoky flamenco bar in Córdoba, and, though I was far back in the rear stalls, I felt I was the only person being played to by the quartet. The chromatic perfection of each of the musicians was astounding.

From this intoxicating intimacy the audience was thrown into the bustle of modern life. Graham Fitkin’s Metal, the PYO’s homage to contemporary British classical music, continued the concert’s ‘world tour’. The activity of Metal created a sense of New York and the flurry of the violin bows up in the air in an eruption of sound were the skyscrapers and building blocks of that city. This was the greatest example in the evening of how the orchestra had come together, despite all odds, to create a sound of strength and resoluteness in the midst of chaos.

The orchestra’s rendition of Mussorgsky’s Pictures at an Exhibition (Orch. Ravel) displayed the groups incredible versatility. I found myself once again in disbelief that most of these musicians had not even reached the age of 25. With equal skill, the orchestra executed the drama of Baba Yaga’s hut, the grandeur of the Great Gate of Kiev and the agility of Hartmann’s eggshell-wearing ballet girls.

The three standing ovations the orchestra received could not have been better deserved. The concert renewed faith and optimism but of course was not just about the music. It sent a powerful message of resilience to all those who deny these young, talented human beings freedom and justice. In a political environment that far too often ignores the Palestinians' outcry, this concert allowed the musicians space to make their voices heard.

The orchestra will be back in the UK for another tour very soon in sha Allah.

By Alexander Reviakin, 02/08/2016. Alexander is currently an intern at Caabu and studies Arabic and International Relations at the University of Durham.