A letter to Prime Minister Boris Johnson from 133 MPs and peers, from all parties, reacting to US President Trump’s ‘peace plan’, has been sent. In it, the parliamentarians express their grave concern over the plan’s contents, which they say “shows contempt for the aspirations and rights of the Palestinian people and international law, and provides no realistic basis for a return to negotiations.”

The letter echoes the warning of 16 UK humanitarian, development, human rights and faith organisations (including Caabu) that the plan may “lead to the formal annexation of Palestinian land, perpetual Israeli occupation, and the negation of Palestinians’ collective right to self-determination.”

The parliamentarians call on the Prime Minister to reconsider the UK’s ‘welcome’ for the deal, to outline what action it will take to respond to Israeli Prime Minister Benjamin Netanyahu’s stated intention to annex parts of the West Bank, and to work with other countries to “demonstrate that serious breaches of international law result in serious consequences.”

Rushanara Ali MP, who led the letter after having visited the West Bank with Caabu and Medical Aid for Palestinians in May 2019, provides the following quote:

“That so many MPs and peers from across the house have so rapidly signed on to this letter demonstrates the real depth of concern felt in Westminster about this reckless plan and the agenda of annexation it promotes.

“On my recent visit to the West Bank I saw for myself the rapid deterioration in humanitarian situation, and the extent to which the occupation has wrested away from the Palestinian people their right to self-determination and control over their daily lives. The vision presented by President Trump is one where this supposedly ‘temporary’ occupation is made permanent, condemning the region to a future of two people on the same land in a situation of perpetual inequality.

“By uncritically welcoming Trump’s unworkable and unfair ‘deal’, the government has done nothing to disabuse Palestinians of the feeling that the international community – Britain included – has forgotten their plight. There is a road to sustainable peace for Palestinians and Israelis, but it will only be paved by recognition to the equal dignity and rights of these two peoples, and action to redress the chronic imbalance that currently exists.” 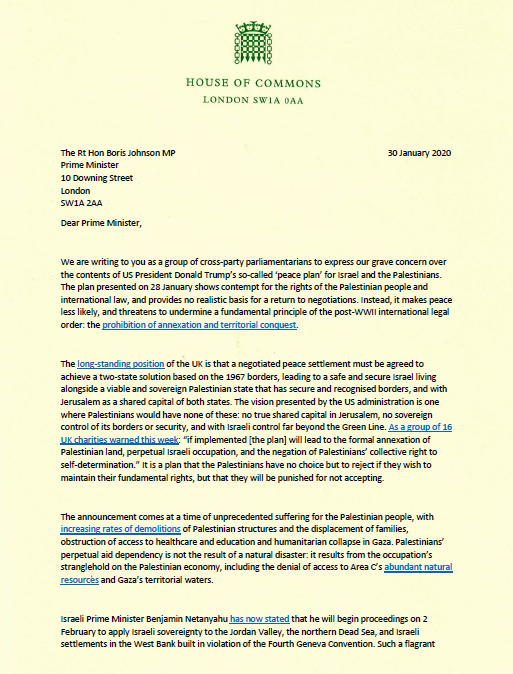 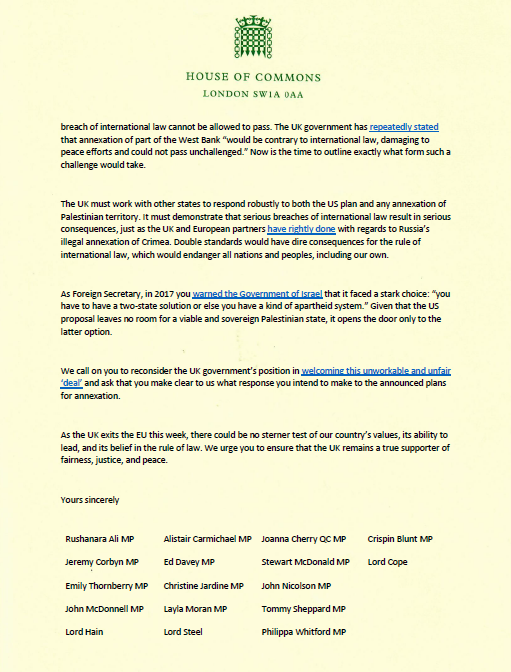 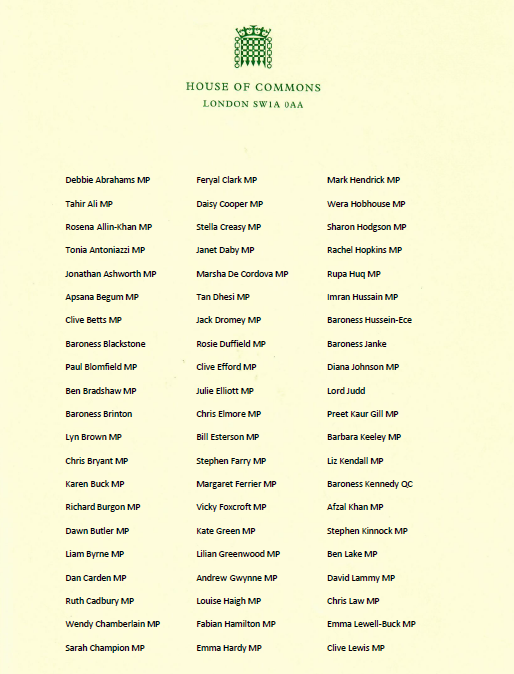 *Since the original letter was published, the following parliamentarians signed:

The total number of parliamentarians who have now signed stands at 143.

A response to the letter to the Prime Minister Boris Johnson from Foreign Secretarry Dominic Raab was received on 13 February. 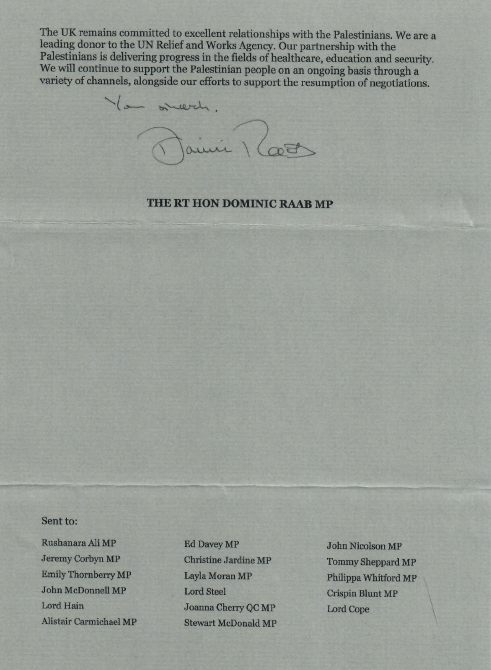