Numerous European parliamentarians (including in the UK) who form part of the European Parliamentarians for Israeli-Palestinian Equality, a network of those from various European parliaments of 17 countries and the European Parliament which meets regularly and cares passionately about advancing equality, justice and rights for Israelis and Palestinians, have written to their respective Foreign Ministers (including to UK Foreign Secretary Elizabeth Truss) and the European Union's High Representative of the Union for Foreign Affairs and Security Policy, Josep Borell.

This letter, sent on 16 November 2021, was sent to given the severity and escalation of the current situation, particularly in regard to attacks on Palestinian civil society and the “terrorist” designation by Israel of six Palestinian civil society organisations, the prospect of forced evictions and dispossession of Palestinian families in the occupied East Jerusalem neighbourhoods of Sheikh Jarrah and the prospect of the E1 settlement which would cut off occupied East Jerusalem from the rest of the occupied West Bank.

Urgent actions needed to uphold the prospect of Israeli-Palestinian equality

Each of these actions crosses a red line. The designation, now extended to the West Bank by Israeli military order, criminalises free speech in Palestine. The forcible transfer of occupied people is a war crime. Building on E1 severs East Jerusalem from the rest of the West Bank. We ask you to express your concern to the Government of Israel about these grave violations of human rights and international law, which Israel can and must stop. Not only do they threaten Palestinian lives and wellbeing, but they also destroy any imaginable two-state solution-which the international community continues to advocate. All this against the background of the collective punishment of 2 million Gazan Palestinians and illegal settlement expansion and Palestinian home demolitions across the West Bank, whilst settlers attack Palestinians with impunity.

We ask you publicly to press the Government of Israel to rescind the designation of six Palestinian human rights and other NGOs. Ominously, the Israeli military command has just extended this designation to the West Bank, meaning that these NGOs are now at risk of having their offices searched/closed, computers seized, and even staff arrested. Israel has adduced no evidence against these organisations, but relies on recycling an old file that has already been examined and dismissed by several European Governments. The file contains information that may well have been extracted by use of torture against Palestinians who are unrelated to the six. Sadly, this designation is not an aberration, but part of a broader strategic campaign against international, Israeli and Palestinian civil society challenging the occupation. The six organisations all share the distinction of submitting evidence legitimately to the International Criminal Court.Engaging with the ICC is not a “terrorist” activity. Please call onIsrael to rescind these designations immediately and to desist from all efforts to suppress civil society activity. European Governments and the European Union should continue to engage fully and publicly with Palestinian civil society, particularly with the targeted NGOs –and should maintain financial support for their programmes to uphold equal rights.

Stop the evictions of Palestinian families in Sheikh Jarrah and Silwan

Israel is moving towards the forcible transfer of Palestinians and major dispossession of Palestinian property in Sheikh Jarrah and Silwan in occupied East Jerusalem. Any such forcible transfer constitutes a grave breach of international law. This comes as part of a determined Government –sponsored effort to obliterate the Palestinian presence from the holy basin area of East Jerusalem. This activity is criminal –it must stop.

Stop a new settlement on E1, cutting off East Jerusalem from the West Bank

Israel has pushed forward with the E1 settlement project to the east of Jerusalem, knowing full well that it is a red line for the US and Europe -and may be within days of final approval.Like all settlements, it is illegal -contravening the Fourth Geneva Convention and UN Security Council Resolutions, including UNSCR 2334. If this settlement plan is enacted, it destroys any chance of a viable two-state solution that has been European policy since 1980. ConsequencesThe Israeli Government needs to realise that any of the above actions will do lasting harm to our bilateral relations, and to Europe/Israel relations. Each action crosses a red line. Israel knows that –and needs to know that there will be severe consequences. We believe that it is in Israel’s own best interest to desist–and that it is your duty to make clear publicly now that any or all of these actions will not pass unchallenged. Our Parliamentary network is founded on the principle of Israeli-Palestinian equality.

We urge you to speak and act against these threats to equality. 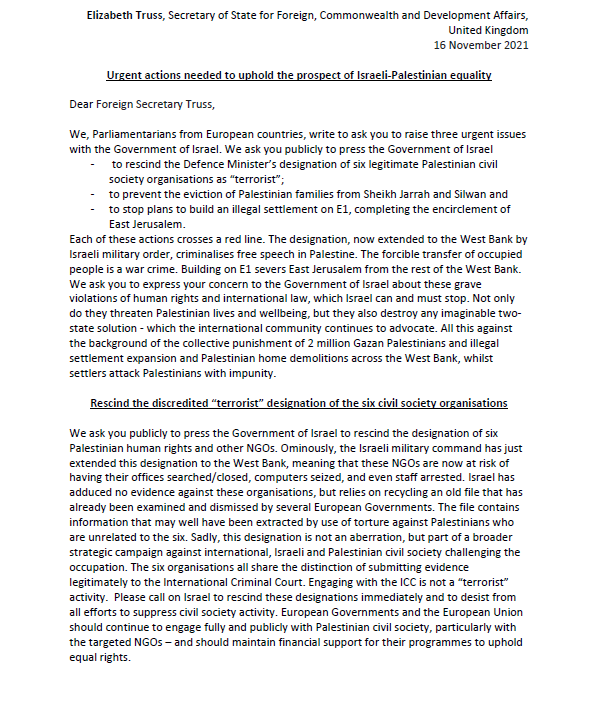 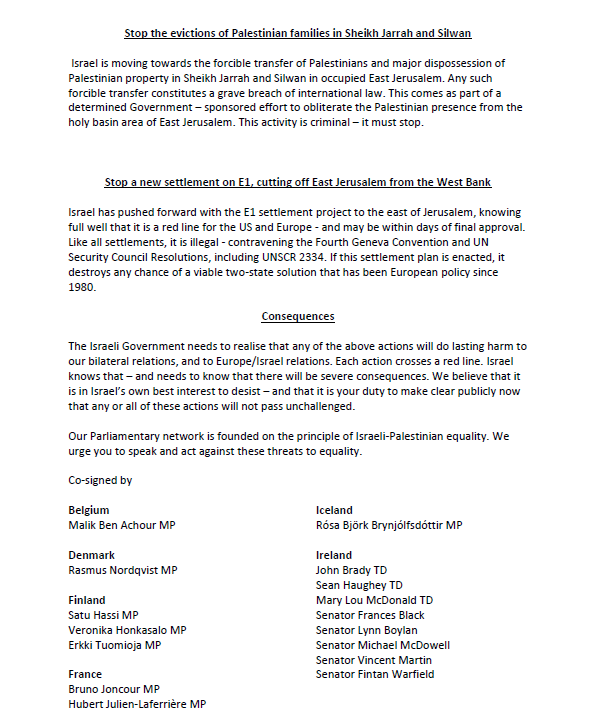 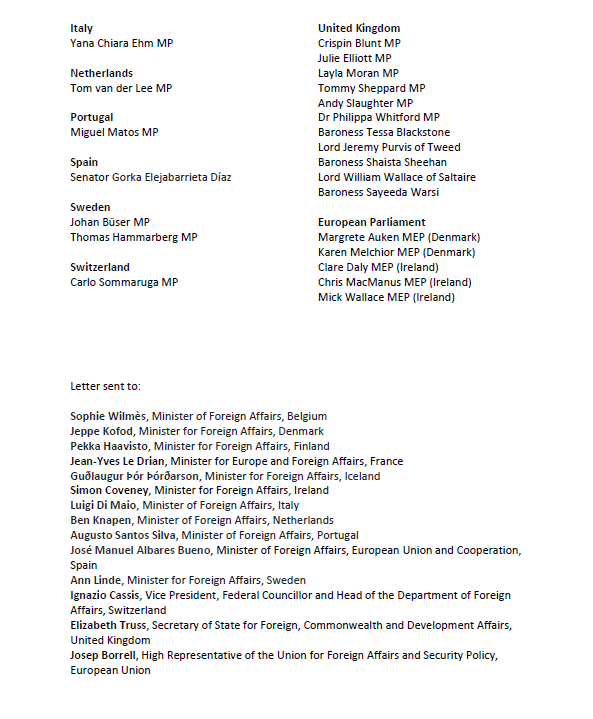 On 30 November 2021, a response to Caabu was received from Magnus Nilsson, Head of Political Staff at the Swedish Ministry for Foreign Affairs on behalf of Minister for Foreign Affairs, Ann Linde. In the letter, Sweden reaffirmed its support of the EU position on Israel's designation of Palestinian civil society organisations.

Thank you for your letter dated 16 November. I work at the Ministry of Foreign Affairs and have been asked to respond to your email.

Like the rest of the EU, Sweden is clear about the need to refrain from  unilateral actions that undermine the prospect for a negotiated two state solution with Israel and Palestine living side by side in peace and security with Jerusalem as capital for both. .

Israeli settlement policy, including demolitions and evictions, is inconsistent with international law. Together with eleven other countries, Sweden has publicly exhorted the Government of Israel to reverse decisions to advance settlement expansion.

We have also underlined the importance of an end to rocket attacks from Gaza, and other forms of violence and incitement to violence.

Sweden’s and the EU’s well-established positions on the Israeli-Palestinian conflict have been conveyed by Foreign Minister Linde during her recent visit to Israel and Palestine in October and more recently at the AHLC meeting in Oslo in November.

Sweden supports the statement by the EEAS spokesperson of 28 October on Israel’s designation of six well-known Palestinian civil society organisations as terrorist organisations. Together with other donors, including the EU, we are seeking more information from Israeli authorities on the basis for the designations. Past allegations on the misuse of funds were not substantiated in a thorough review.

Civil society has a key role to play for a democratic and sustainable development in all countries, including in Palestine. We are concerned by the shrinking space for civil society actors in Palestine. Sweden supports organisations working for democracy, rule of law and human rights.