Sixteen British Parliamentarians, including former Labour Party leader Ed Miliband and former Cabinet Minister Baroness Sayeeda Warsi, have written to the Foreign Secretary Boris Johnson to urge an immediate halt to the imminent demolitions by Israel of the Bedouin community of Khan al-Ahmar in the West Bank.

All sixteen of the signatories to this letter have visited Khan al-Ahmar over the past six years, and spent time in the community's school made from disused tyres, which is up for demolition. Fourteen of the Parliamentarians who are signatories to the letter have visited Khan al-Ahmar on Caabu and Medical Aid for Palestinians delegations. For more information, please contact Joseph Willits (willitsj@caabu.org).

As a group of cross-party politicians, we are outraged by the announcement of 40 demolition orders in the Bedouin community of Khan al-Ahmar in Area C of the Occupied West Bank. This includes Khan al-Ahmar’s school, built from disused tyres. You will remember the case from Foreign Affairs Questions on 21 February. Demolitions and the threat of such demolitions at Khan al-Ahmar have been raised on multiple occasions.

The UK Government response to these demolition orders needs to be strong, and has a duty to condemn and urge an immediate halt to these demolitions which is in grave contravention of the Fourth Geneva Convention (4GC). Article 46 of 4GC prohibits the destruction of personal property by an Occupying Power unless it is rendered absolutely necessary by military operations.  Every possible avenue that the British Government has should be used to ensure that these demolitions do not take place, and ensure that hundreds of men women and children are not made homeless as a result. You will be aware that Israel’s demolition policy in occupied Palestinian territory is at unacceptable levels. Khan al-Ahmar should not be another part of this alarming statistic of 53 Palestinian owned structures demolished bi-weekly in 2017, with 105 structures being demolished in 2017 alone making 151 people homeless up until 6 February 2017.

The significance of Khan al-Ahmar is huge. Given that the community lies within the strategic settlement project of E1 that would effectively sever Jerusalem from the West Bank as well as dividing the West Bank in two. It lies in the middle of the project that would seal the fate of the two-state solution. These violations must be understood in the broader context of Israel’s prolonged occupation of the Palestinian territories and what this means for our commitment to the establishment of a viable Palestinian state. The risk of forcible transfer and the creeping de facto annexation of Palestinian territory not only threatens the demographic composition of the West Bank through a coercive environment, they  also severely undermine the Palestinian right to self-determination and the possibility of a viable  and contiguous Palestinian state.

Whilst conditions in Khan al-Ahmar are grim, basic, and under the constant threat of demolition, the nearby settlement of Kfar Adumim enjoys excellent facilities and is the home to Israel’s minister of agriculture, Uri Ariel. Many British politicians, including a serving Foreign Secretary and Ministers responsible for the Middle East have visited the Bedouin community. All of us who are signatories to this letter have visited Khan al-Ahmar. This community and so many others affected by Israel’s demolition frenzy are of huge importance to so many of us. The demolition of Khan al-Ahmar would serve as a grave failure for the international community.

It is our hope, that when make your first visit to the Occupied Territories as Foreign Secretary, you will also be able to visit  Khan al-Ahmar, that you too will be able to meet the community and speak to some of the hundreds of school children from this village and other surrounding ones, who need their school built of disused tyres, and should not have to endure the demolition of their homes or their school. We urge you to make urgent representations to the Israeli government about the latest developments at Khan al-Ahmar. 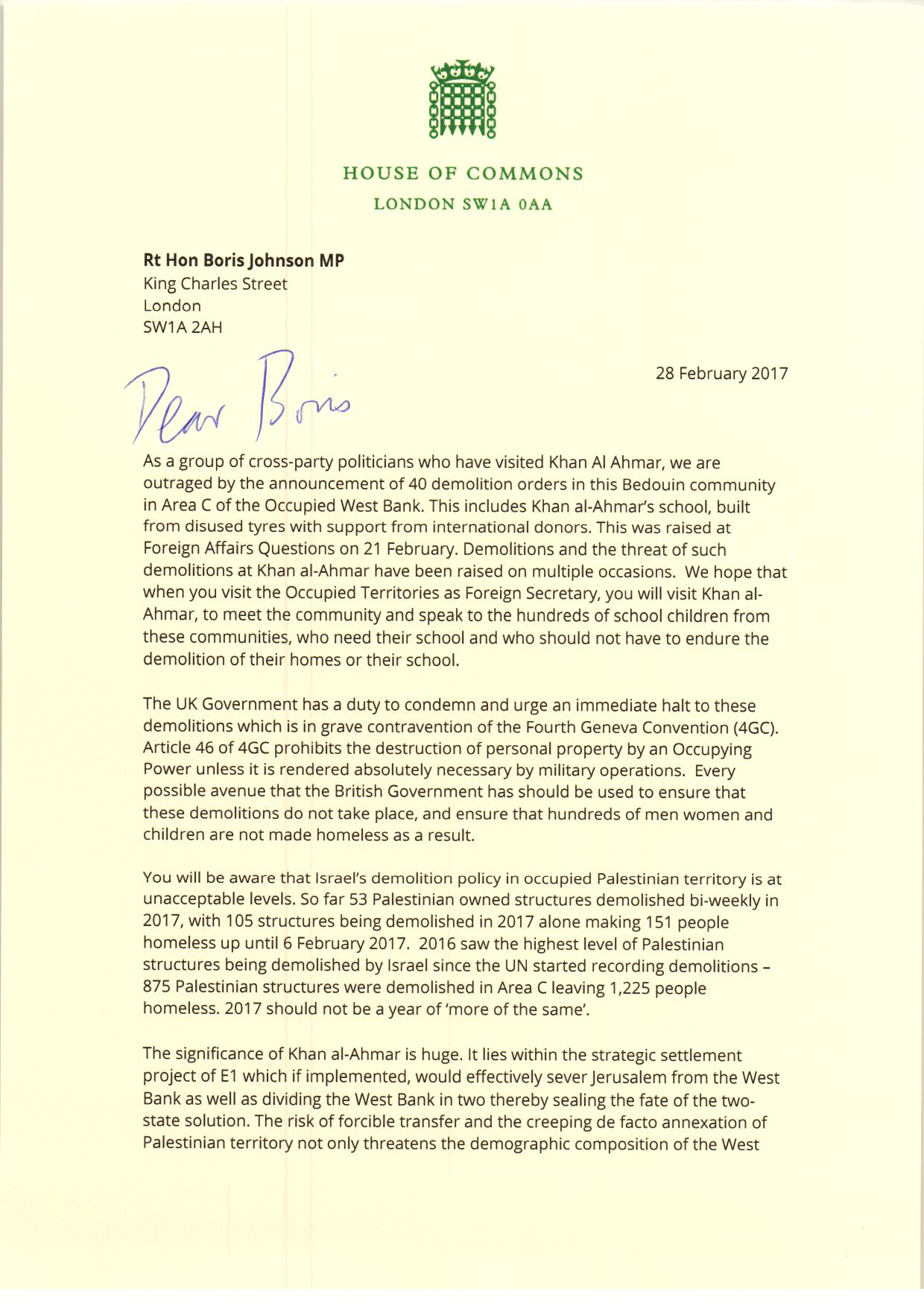 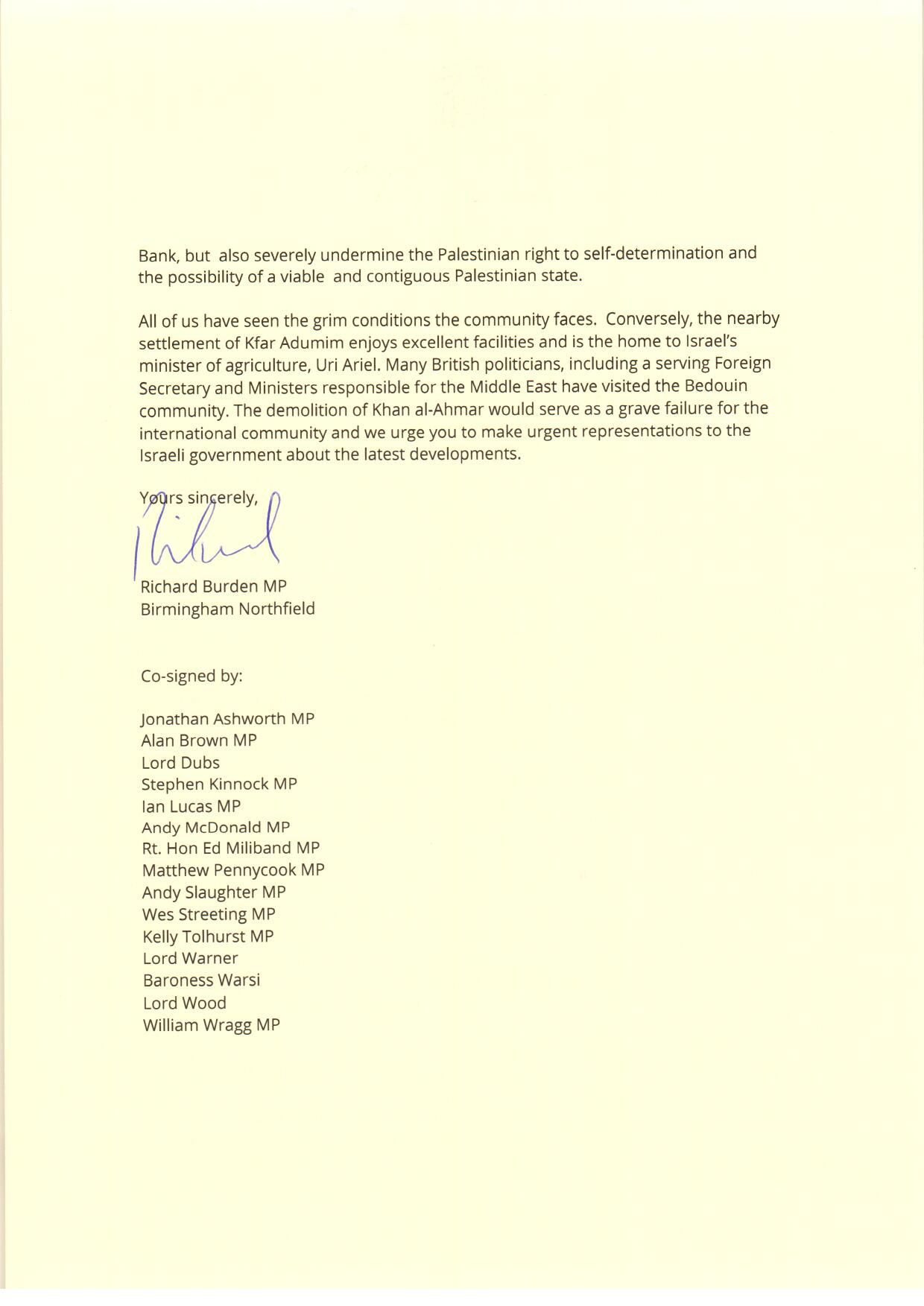