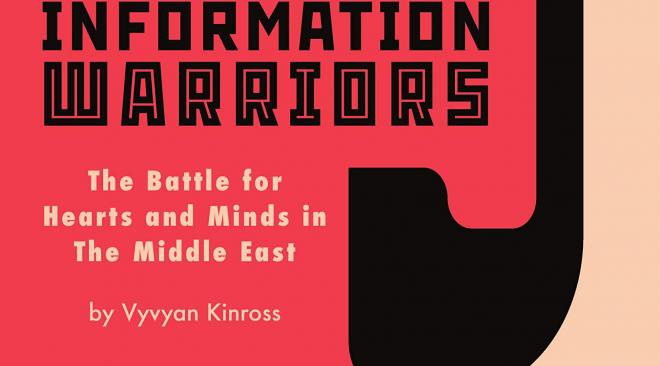 Caabu will host an online discussion on Tuesday 31 March 2020 at 11am (GMT) with Caabu board member Vyvyan Kinross who will discuss his book, Information Warriors - the battle for hearts and minds in the Middle East.

Vyvyan Kinross will discuss with Chris Doyle, Caabu's Director, his book, Information Warriors. This charts the often hidden information war, from the propaganda coup of the entry of British forces into Jerusalem in 1917 through to the campaign of perception management that sold the case for regime change in Saddam's Iraq in 2003, and up to present-day media conflicts that rage across the region.

You can purchase the book here.

Also if you would be interested in signing up as a member to support our work, you can do so here. Please do also watch our video, about 50 years of our vital work.

About the book
A century on from the Paris Peace Conference that redrew the map of the Middle East, and the region has endured constant conflict. Alongside the military and economic wars, the West and Arab states have fought to control public opinion by managing the narratives that explain and validate their actions.

This story charts the often hidden information war, from the propaganda coup of the entry of British forces into Jerusalem in 1917 to the campaign of perception management that sold the case for regime change in Saddam's Iraq in 2003.

As the West has embraced the abstractions of public diplomacy and soft power, the propagandists of Islamic State have developed global reach and impact using a simple message and cutting edge digital and social media to generate publicity and harvest recruits. In the Trump era of fake news, media manipulation and cyber warfare, the battle to control public opinion in the post Arab Spring Middle East has raised the stakes for winners and losers.

Vyvyan Kinross is a PR and communications specialist, advising governments on how to set up and manage their information and communications capacity. He has most recently worked in Abu Dhabi, UAE and the Occupied Palestinian Territories. In 2013, he was contracted as Senior Advisor in Public Administration & Organisational Capacity Development at the United Nations Office for Project Services, Copenhagen as an expert in PR & corporate communications systems in fragile and post-conflict states.

Vyvyan is a member of the executive of the Council for Arab British Understanding and is a graduate in Modern Arabic Studies from the University of Durham.